Why Do Beagles Howl? – Demystifying the Howling of the Beagle

All dogs are known to howl from time to time. However, some dog breeds have been found to howl more than others. Beagles, for instance, howl very often. And as a Beagle owner, you may be wondering why your dog is so inclined to making this sound.

So, why do Beagles howl? Beagles were developed as hunting dogs, so they have been trained to howl when they spot prey. Even in domestic households, Beagles will retain this instinct from their past, and may howl when they spot a squirrel, feel lonely, want attention and more. It’s how Beagles communicate.

This guide will help you understand why your Beagle howls, and what you can do to stop him or her from howling so much. Use this guide to help you better understand your Beagle’s way of communicating.

Owners of Beagles are no strangers to this howling sound. Some may find it endearing and others, more annoying. Regardless of how you feel, there are several reasons that Beagles throw back their heads and howl.

To notify you that they’ve found prey

Beagles have been bred as hunting dogs and were popular hunting companions in the late 1700s and early 1800s. More specifically, they were (and still are) some of the best scent hounds and tracking dogs to ever exist.

In fact, they were so popular that there was a type of hunting that was named after them, called “beagling.” Beagling was the sport of hunting rabbits and hares a pack of Beagles.

Beagles used their long ears, short legs and incredible noses to closely follow the animal’s trail scent on the ground. When they spotted the prey, they would howl as a pack, to show the hunters where it was.

While most Beagles today aren’t used for hunting, they still have the instinct to howl if they spot something that they think is “prey.” Prey to them may mean different things – it can be a mouse, squirrels, cats, dandelions, or even the wind!

So, if your Beagle appears to be howling while looking at, or even chasing something, in particular, he’s trying to tell you he’s found prey to hunt!

Have you ever seen and heard a chain reaction of howling (or barking) from neighboring dogs? It’s something that dog owners are far too familiar of. Well, Beagles are great at participating in these.

When Beagles were hunting for game, one Beagle that howled set off all the others in the pack. It was a group effort so that they could increase the chance of attracting the hunter’s attention. It was quite effective.

Today, your Beagle may begin howling when he or she hears another dog howling. While the other dogs aren’t in the dog’s “pack,” instincts will likely kick in.

Murphy howls all the time. To the 6PM fire horn, firetruck & police car sirens, and other dog howls. His howl is a half ‘arooo’ and half whisper, with a husky undertone. Very unique.

Your Beagle may even howl when they hear something that sounds similar to howling, like a siren or some type of instrumental music. In other words, high-pitched sounds can bring out howls from them.

According to Mental Floss, a dog howling to sounds, like sirens, is likely because they’re closely related to wolves. As such, members of the wolf pack will often howl to provide a way of locating and finding pack-members. Think of it as GPS for canines.

Beagles are naturally social dogs who do not enjoy being alone. As such, they’re prone to developing separation anxiety. If your Beagle has been home alone for a while, he or she may begin to howl to express their loneliness.

According to Hills Pet, Beagles will always prefer company – whether that means another dog, their human or even a cat. This goes back to their pack-dog mentality, where Beagles are generally happier and less stressed with other companions.

I have a 6-month old beagle named Luda. He’s howling like crazy the minute we leave, until the second we’re back – sometimes up to 3 hours straight!

Your Beagle may also howl when he or she is feeling anxious. This can lead to behaviors such as destroying furniture and upholstery, vomiting, urinating or defecating indoors. It’s not something you’d want to deal with after coming back from a long day of work.

Your Beagle may start howling when they pick up on the scent of another dog, when they hear a car coming into your driveway, or when your doorbell rings. Pretty much, anything that can be seen as intruding on their territory.

This may be because he or she is marking territory, and it’s not exclusive to Beagles. In fact, many dogs howl to tell other dogs that they are entering territory that has already been claimed.

Again, there’s evidence suggesting that this type of territorial behavior is due to the dog’s genetic closeness with wolves. Wolves don’t just display scent-marking with their urine and scats, but apparently with their howls too.

When your Beagle is in pain

Many dogs howl when they’re in pain. However, this unique howl sounds different from the other types of howling – it’s lower-pitched and continuous. Just imagine when humans cry from pain, compared to crying from sadness. It’s different.

A clear-cut sign of howling in pain is if your Beagle isn’t a big howler, but all of a sudden starts howling for “no reason.” It’s could be from an injury, abdominal pain or even arthritis.

If your Beagle is continuously keening, gently massage his or her body to see if you can find an injury. Regardless, it’s still highly recommended you take your Beagle to the vet for a more thorough check-up.

For extra attention and love

Just like children, dogs cry when they want attention. Your Beagle may simply be howling to tell you to stop watching TV and play with him. Or, he may howl when he wants a treat or a walk. It’s their way of communicating with you.

This may be the most common reason why your Beagle is howling. And although you may have the urge to give in, you must teach your dog that this behavior isn’t acceptable. If they realize howling “works,” you won’t stop hearing the howls.

How to Stop Beagles From Howling

A Beagle that is constantly howling can be both upsetting and disturbing, especially if you have infants and small children in the home. Plus, you’ll probably get complaints from your neighbors or find it hard to concentrate.

Fortunately, there are plenty of things you can do to cut down on your Beagle’s howling by discouraging this behavior.

First, you’ll want to try and understand why your Beagle is howling. If he or she is in pain, then it’s important to address the howling by taking your Beagle to the vet. Some dogs may be just telling you something is wrong.

If, however, your Beagle is howling because he or she has spotted ‘prey,’ wants attention, is marking its territory, or is lonely, use these methods to encourage your pooch to howl less.

You may be tempted to shout at or give your Beagle a sharp rap when the howling begins. However, Beagles don’t respond well to harsh methods of discipline. You want to instead, distract your Beagle when he or she starts howling.

For example, if your Beagle starts howling when he spots prey, call him away and distract him with a game of ball or frisbee catching.

And if the Beagle starts howling after spotting another dog, or when someone rings your bell, call your dog away from the room. Instead of getting angry, take them away from the stimuli that’s causing the howling.

One common mistake that many owners make is by rewarding the dog for howling. If your Beagle is howling and you give the dog a treat to stop them, you’re telling the dog that if he howls next time, he’ll probably get another treat!

Pay attention to when and why your Beagle howls and try to identify the triggers. If possible, find ways to block out the triggers.

For instance, if you sense that loneliness is the reason for your Beagle howling, then leave the television or music on when you leave the house.

Or, if you think your Beagle is howling because he can see another dog, try to bring him into the house before the other dog comes out. By avoiding these triggers, you’ll have a decent chance of reducing this behavior.

Using similar steps, you can also teach your Beagle to “speak.” That way, they may be less inclined to bark and howl – unless you tell them to do so.

Make sure your Beagle is getting plenty of exercise

Beagles are very lively dogs and may be howling out of boredom, or excess energy. Beagles love being in the outdoors, so take your dog outdoors often, and let him off the leash as often as possible.

After all, the PDSA recommends that Beagles get at least one hour of physical activity each day. If you allow your Beagle to run off excess energy, the dog will probably start howling less too.

If you think your Beagle is simply howling to get attention, the best strategy to get him to stop is to ignore him. It may sound cruel, but most dogs bark and howl to evoke some kind of reaction from the owner.

Don’t rush over if your Beagle starts howling – instead, immediately leave the room or turn your attention to something else. When your Beagle realizes that he can’t get attention by howling, he’ll eventually stop.

This may take some time. Beagles are notorious for being stubborn dogs and won’t give up so easily. So, patience and consistency is the key with this method.

If you’ve tried everything to stop your Beagle from howling but have had no success, then it may be time to turn to a professional. It can cost a decent amount, but may be well worth it if you can’t stand the howling.

One option is to talk to your vet about the problem. Your vet may be able to give you some more advice on handling the howling. Alternatively, look for dog obedience trainers or animal behavioral therapists.

These professionals will be skilled in understanding each unique dog’s behavior and will be able to suggest strategies accordingly.

Beagles do howl more than many other dog breeds. This is probably because they have been trained and bred to howl for so many years.

Howling when hunting was a useful way of alerting hunters that prey is around. However, Beagles also howl for a variety of other reasons. In a nutshell, howling is just how these dogs communicate with one another and with humans.

People may have different opinions on this. With our Corgi, we initial thought that telling her to stop barking was the equivalent of telling a human to stop speaking. While the analogy is somewhat valid, it’s important to be considerate to others too.

Unless you live on a huge farm with no one around for miles, it may be okay. But then again, do you really want to hear a dog howling all day?

Training your Beagle to stop howling isn’t trying to mute the dog. Instead, you’re just training the dog to “communicate” when necessary. So by being mindful of how you deal with your Beagle’s howling, you can understand your dog much better, and develop a stronger bond with him or her!

← Previous
Are Beagles Good With Cats? - The Guide to Raising Beagles and Cats 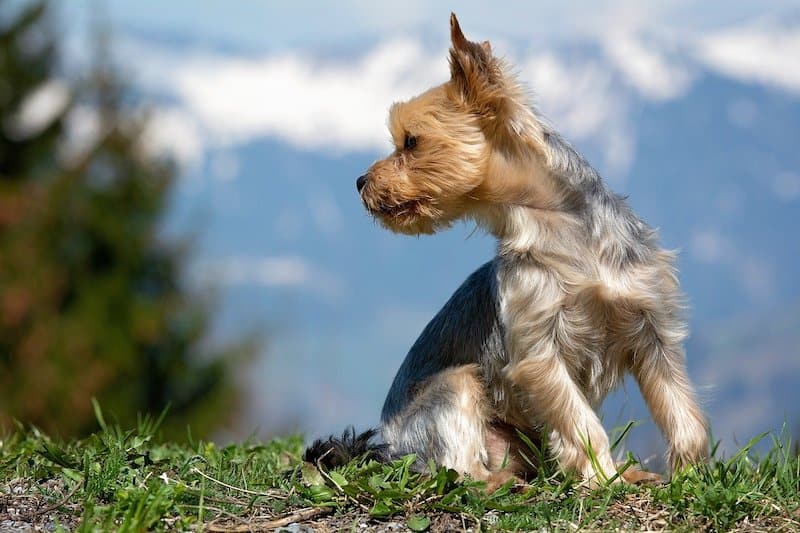