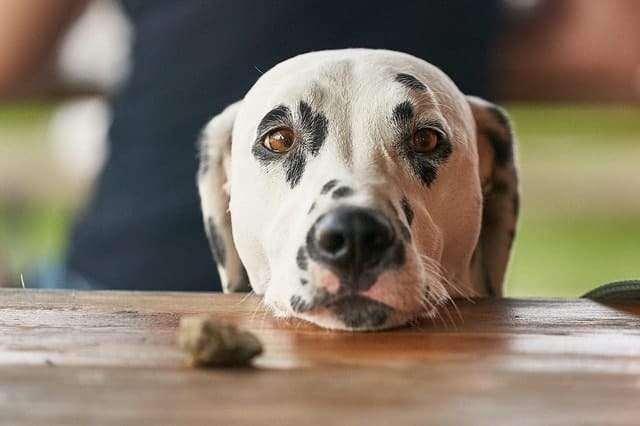 Popularized by the cult-classic Disney hit, Dalmatians are iconic for their spotted coats and outgoing personalities. They’re great with people and as loyal as they come. However, are these dogs really as smart as they’re portrayed in the movie?

So, are Dalmatians smart? Yes, Dalmatians are smart dogs. They’re officially classed as an “above average intelligent” dog breed according to canine psychologist Stanley Coren. In fact, they’re the 62nd smartest dog breed out of 138 qualifying breeds for obedience/working intelligence.

Though the 62nd place isn’t something to scoff at, we think Dalmatians are actually smarter than their rank. Let’s explore the different types of canine intelligence and what actually makes these dogs smart.

As mentioned, Dalmatians scored in the “above average” category for dog intelligence. Although it may sound impressive, you may be wondering how we came to this conclusion?

Stanley Coren, renowned researcher and canine psychologist, is largely credited for developing the criteria and canine intelligence ranking list used in this article.

With the help of 199 North American obedience trial judges, Coren was able to finalize his dog intelligence rankings based on two main criteria.

Stanley Coren received a huge response. However, only dog breeds with at least 100 responses were qualified for his canine intelligence ranking list.

And as one of the top 100 most popular breeds in America, Dalmatians were fortunate enough to qualify for the intelligence list.

How the Dalmatian Performed

Dalmatians performed fairly well! As a matter of fact, they performed far better than most dog breeds. Coming in at the 62nd place, Dalmatians were put into the “above average intelligent” class with 30 other dog breeds.

By being in the above average class, Dalmatians were capable of learning a brand new command with just 15 to 25 repetitions. This means you could teach your Dalmatian a new trick in a couple hours or so!

On the other hand, Dalmatians were able to obey a known command on the first attempt with a 70% or better success rate. In other words, Dalmatians are obedient dogs!

There are many other popular dog breeds in the same intelligence class as the Dalmatians. For example: the Newfoundland, Yorkshire Terrier, Samoyed and the Bearded Collie.

Though Dalmatians are more intelligent than many other dog breeds, how do Dalmatians compare to the smartest dogs? The top 10 most intelligent dogs are in a class of their own.

The smartest dogs are able to learn a new command with less than 5 repetitions. This is at least 3 times faster than the Dalmatian. They’re some of the quickest learns in the animal kingdom!

On the other hand, the smartest dogs will obey a known command on the first try with a 95% or better success rate. The most intelligent dogs also happen to be the most obedient.

You’ll have heard of nearly every single breed in the top intelligence class. For some reason, they’re also the most popular dog breeds.

Owners: Is Your Dalmatian Smart?

If you want to know just how smart Dalmatians are, the best way is to ask real owners. We surveyed the popular Dalmatian Subreddit forum for responses to this question.

Here’s what Dalmatian owners had to say:

1. Thisismysfaaccount says YES: “I done a lot of reading on Dalmatians before we picked ours up. He’s very intelligent at 3 months he already has a repertoire of tricks under his collar. He can sit, lay down, give both paws, Hi-5, come on command and heel.”

2. S18m says YES: “They’re super intelligent dogs and quite curious too! Oh man, this got me feeling nostalgic thinking about when mine was a little pupper.”

3. Underachieving19 says YES: “Dalmatians are a noble breed with a long heritage. They’re brave, loyal and INTELLIGENT dogs. Wouldn’t get any other dog breed.”

5. Anonymous says YES: “To tell you the truth they are very smart but extremely stubborn. She is too stubborn to do tricks because she knows I’ll give her the treat regardless. She doesn’t play because she thinks she will get in trouble.”

6. Jlachaus1 says YES: “Biscuit is really smart. She knows sit, shake, lie, put em up, go home (go to her crate), give me a hug, kisses. She only learns when she wants to though.”

7. Notpoundpuppy says YES: “Dalmatians are very smart as long as you train them properly. Deuce knew how to sit, lay down, roll over, begging pose, shake, fetch, and go home (when he was crated).”

8. Forest_cat_mum says YES: “So many people think that Dalmatians are just going to be biddable, quiet dogs, when they’re such active, smart, high-energy dogs that they need a good schedule!”

9. Lionessbelieve1 says YES: “My Dalmatian is also incredibly smart. We taught her a ton of great tricks very quickly. I’m not sure why people think they’re stubborn, mine loved training…as I’m sure your Dal will be.”

10. Divinedogman says YES: “Dalmatians are more clever than you think. My dog loves to play dumb to get treats. She’ll conveniently “forget” the “wait” command and go for the treats.”

Why Dalmatians Are Smart Dogs

When it comes to dog intelligence, there are three main components or dimensions that make up a dog’s true IQ. The smartest dog breeds list published by Stanley Coren was based off just obedience/working intelligence.

However, there’s much more to measuring dog IQ than that. The other two parts used to measure a dog’s intelligence is instinctive and adaptive intelligence. Both are just as important, if not more.

Instinctive intelligence refers to the skill or ability that the dog was bred to do. For example, Border Collies were bred to be one of the world’s greatest herding dogs.

The innate ability for these dogs to herd livestock without human intervention and/or training requires instinctive intelligence. Border Collies know how to round up sheep into a group and guide them towards a direction – all by themselves!

So what were Dalmatians bred for and what’s their instinctive intelligence? They were originally bred to be carriage dogs with guarding instincts.

In the 17th century, Dalmatians ran alongside carriages to help guide and protect them from various threats they may encounter. They were the original carriage dogs for many reasons.

Dalmatians are athletic, have high endurance and are always alert. Some say they have an affinity towards horses, who they work with. Because of this, they were the best at what they do!

The last dimension of dog IQ is adaptive intelligence, which refers to the dog’s ability to learn for itself. Is the dog able to learn from old mistakes and experiences?

One Dalmatian owner tells us,

My Dalmatian has been able to figure out whenever I’m planning to leave my house. He picks up the smallest signs of me trying to leave and gets nervous.

There are so many examples and stories of high adaptive intelligence in Dalmatians. In fact, I’d argue that this component of dog IQ is the most important.

The problem with smart dogs is that they may be more difficult to raise. Some owners prefer “dumber” dogs because they require less mental stimulation.

Though this may be somewhat true, there are ways to provide a ton of mental stimulation for your Dalmatian. Obedience training is great, but you can’t simply be spending all that time with it.

The next best solution is to provide dog puzzles and smart toys. Here’s a few of my favorites that I know Dalmatians will love. The first one is Nina Ottosson’s Outward Hound Dog Puzzle.

It’s a fairly basic dog puzzle, but it’s provided my dogs with a ton of entertainment. When they were pups, they’d spend 30 minutes figuring this out. It’s a great way to keep them distracted if you need some free time. I Highly recommend checking it out at Amazon here.

I’m also a huge fan of the StarMark Bob-A-Lot Interactive Dog Toy. It’s simple in design – a bobble device where you hide treats. Your Dalmatian will need to bob it for treats to be released.

It’s a great way to deliver meals to your Dalmatian that helps with their smart personalities. Chances are, they’ll be very into it. Make sure to get a size large at Amazon.

There are so many great smart dog toys you can get for your Dalmatian. However, these are just my dogs’ favorites.

As long as you keep them entertained with toys, playtime and training, you won’t have a problem with an intelligent dog.

If you’re still debating about bringing home a Dalmatian, look into their personalities and temperaments. Never raise a dog because they’re “intelligent.” As long as they’re suited for you and your family, they’ll thrive!

Give these dogs a chance and you won’t regret it! Do you own a Dalmatian? Are they intelligent dogs? Leave us a comment in the section below!