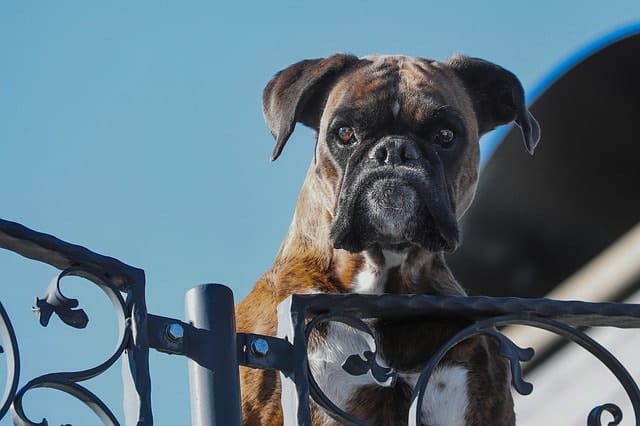 The Boxer has been one of the more popular dog breeds in America, ranking 11th out of 193 breeds. They are intelligent, loyal, and hard working dogs. You could say they have it all! However, they have an interesting history too.

So, what were Boxers bred to do? The Boxer has many ancestors including the Bulldog, Bullenbeisser and the Mastiff. Developed in Germany 200 years ago, Boxers were a bull baiting dogs that later became assistants to butchers in slaughterhouses. After coming to the United States, they continued to be working dogs and loving family pets.

Let’s look further into the Boxer’s history to learn more about this fascinating breed and what their breeding purpose is.

RECOMMENDED: Are Boxers Smart? Here’s Why

The Boxer is a dog that’s full of energy. They are playful and intelligent, and dogs that prefer company. Their loyalty and companionship are what Boxer owners love the most about this breed.

Boxers make great pets in large families with busy households. As long as they have plenty of exercise, these dogs will be happy in any home environment – be it a city apartment or a large country farmhouse.

Though Boxers are vocal dogs, they don’t excessively bark like many other breeds. Instead, they make growling sounds as a way to communicate with humans.

The Boxer has an interesting history as a working dog and has had many roles in society. They were one of the first working police dog breeds, but they were also bred to be guard dogs, family pets and loving companions.

The Origin of the Boxer Name

There are many different theories on the origin of the breed name, “Boxer.” One theory is that Boxers get their name from the way they fights, either when playing or when defending themselves. For instance, they tend to stand on their hind legs and “box” with their front paws.

Another theory is that the name is derived from the Bullenbeiser’s nickname, “Boxl.” Finally, a translation of the German ‘Boxer’ is ‘prizefighter,’ which could be another explanation too.

There exist no records of how the Boxer officially got his name so it is all up to speculation and interpretation by the dog community!

Boxers began their journey to the U.S. at the beginning of the 20th century. The first Boxer to be registered was in 1904. His name was Arnulf Grandez.

The second World War saw the Boxer’s popularity soar. Since the Boxer was used during the war as a working dog, many soldiers became familiar with the breed and fell in love with them. This meant that many WWII soldiers returned home from the war with a Boxer in tow.

Since people want different things from their dogs, they look for different physical attributes and behavioral characteristics. Long before they were pets, every type of dog was bred with a particular role in mind.

Perhaps they were hunting dogs, guard dogs, retrieving dogs or just companions. Whatever their designation, breeders chose characteristics to make the dogs more favorable for their role.

For example, a dog that is bred for companionship will have vastly different behaviors and physical traits compared to a guard dog. Likewise, herding dogs will contrast in both physical characteristics and personality to that of a retriever.

Despite the original intention of the dog breed, most of them are able to transition into fantastic companions and family dogs today.

What Were Boxers Originally Bred For?

Boxers have a long history. In fact, this breed’s ancestors can be traced to 2500 B.C. with Assyrian war dogs. However, the modern-age Boxer has its roots in 19th century Germany when it was bred from the Bullenbeisser, a now-extinct breed that was a “‘bull biter.”

In other words, they were bred as a bull-baiting / hunting dog and had very similar roles as the ancestors of the Pit Bull.

In case you were wondering, Bull baiting is a cruel blood sport where dogs would essentially taunt a bull. Because the bull would be chained up, the taunting would happen until the bull gave up.

Political changes saw the Bullenbeisser breed fall out of favor but it was crossbred with mastiff-type dogs to become more recognizable as the Boxer today. The dog became more of an elegant and sleeker-looking dog.

Furthermore, the overly aggressive nature of the blood sport Boxer was slowly bred out in favor of the more attractive temperament for most casual owners.

As generations passed, the role of the Boxer began changing and so different traits were brought into the breed.

Fortunately, Boxers weren’t limited to just blood sports. In fact, they’re some of the most versatile dogs in the world. Europeans call them the jack-of-all-trades working dog for a reason.

The Boxer has done many jobs in society over the years. It has been a war dog, guard dog, watchdog, police dog, herding dog, board/bison hunting dog and even fighting dog.

Initially, when hunting was the purpose, breeders chose to breed dogs that were brave and courageous. This meant they became pretty great guard dogs and so their role shifted from hunting to guarding and other similar jobs.

When guarding, these dogs then began to have more interaction with people and families, which meant another shift took place. The dog became a companion dog and a family pet.

Boxers are great looking dogs but actually, their features were chosen for a specific purpose. That is, to make them excel at their intended role as a hunter.

Though these traits aren’t needed today, they are still seen in modern Boxers. As a matter of fact, these traits are what makes these dogs so unique. Let’s examine these 4 psychical traits:

It is thought that their jaw, being undershot and wide, was bred into the Boxer in order for it to be able to hold onto its prey until the master could arrive.

It’s why Boxers are famously known for their underbites. Depending on the owner, some think it’s rather “cute.”

A slightly contentious thought is that the wrinkles on the side of the face were bred into the Boxer so that excess blood couldn’t get into the dogs’ eyes when hunting.

This is a physical characteristic seen in many of the top fighting dogs of the world, including the Japanese Tosa Inu.

If the mouth is being used to hold onto the prey, it was necessary for these dogs to have a large nose with wide and open nostrils. Without the mouth, larger nostrils would allow the dog to breathe more efficiently.

Nowadays, we know that breeding dogs to have flatter faces can actually cause breathing problems. However, back when this breed was being developed, this wasn’t known and was thought to be beneficial.

The Boxer’s coloring allows it to blend into the surroundings and different elements of the environment, such as long grass and trees.

Unlike other dog breeds, there are only 3 main colors of these dogs recognized by the AKC. For a closer look at the different color variations of the Boxer dog, check this out.

What Boxers Are Bred For Today

We now know what Boxers have been bred for throughout their history. They served many roles and have an interesting background. These days, however, the majority of Boxers are family pets today.

What makes them great at this is their playfulness and their patience, particularly with children. They are friendly to others, though wary of strangers. It’s why they still make great guard / watch dogs today.

But with early socialization, the Boxer becomes a well-rounded and friendly dog that is outgoing and a true companion for life. They need to play with both dogs and humans (preferably kids) at a young age. In fact, the earlier you start the better.

Unfortunately, there’s a stigma attached to these dogs. They’re consistently on the top 10 most dangerous dogs list (in America). Though numbers don’t lie, it doesn’t tell the full story either.

Most of the Boxer attacks occur when the dog is without proper training and socialization. In addition, an unsocialized Boxer can be dangerous to children due to their hunting instincts and strength.

As a result, most of the Boxer attacks that occur are with small children and an untrained dog. They won’t know how to act around children without socializing with them early on.

Should You Get a Boxer?

Boxers are not the same dogs they once were. But should you get a Boxer? Because Boxers were bred for so many jobs that they did exceptionally well, some may still have those strong instincts.

As long as you provide proper socialization, Boxers will be able to thrive in just about any household. Whether in a family or for a single owner, Boxers have the opportunity to become excellent companions.

Always do your due diligence to see if these dogs match your personality and needs. With that said, Boxers are some of America’s favorite dogs for a reason. You won’t regret bringing home a Boxer!