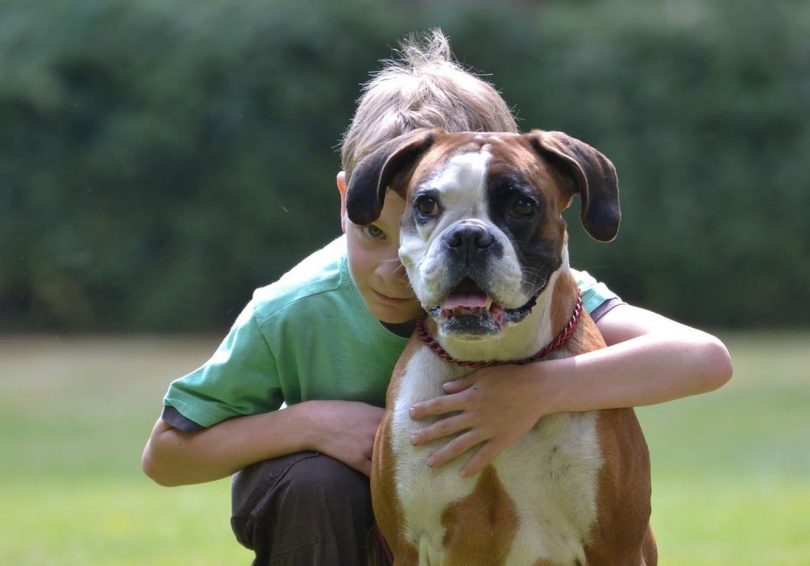 Boxers are a high-energy and playful dogs, which explain their consistent popularity among all dog breeds. But are Boxers good with kids? Can Boxers pose a danger to your kids?

Boxers are safe pets to bring in households with kids because they’re both chivalrous and playful. Indeed, Boxers have quite a reputation for being great companions for children. But as a parent, there are things you need to be wary of.

Keeping a Boxer in your household requires you to know a Boxer’s characteristics and temperament well. In this article, we’ll delve into a Boxer’s personality and explain exactly how they’re good with kids.

RECOMMENDED: What Were Boxers Bred For?

Considering that Boxers descended from an extinct German hunting dog and the English Bulldog, the modern-day Boxer has adapted well to living in the modern world and serving its role as a family pet.

The Boxer surprisingly has a lot of patience and energy. As a result, they enjoy playing with kids, making them a breed favorite for children as well.

Despite the somewhat ferocious looks of the Boxer, these dogs have a playful nature. You may never guess, but they’re quite affectionate and friendly dogs. Spend a day with a Boxer and you’ll know exactly what we mean.

Boxers still maintain some of their aggression from the days when their ancestors were hunting companions. It’s unlikely you’ll experience the Boxer’s aggression unless they perceive their family to be in danger.

However, being intelligent and trainable, Boxers do quite well in social settings – especially when given wide exposure to different people, environments and animals.

Why Boxers Are Good With Kids

Despite popular belief, Boxers are fantastic with kids. If given the proper training and socialization, they make excellent companions, playmates and guardians for them.

There are simply too many reasons why these dogs are highly compatible with children. However, we believe these are the best reasons.

If you’re a parent, then you already know kids are highly energetic and playful. The good news is that so are Boxers! This makes them a perfect fit for each other.

Keep in mind, Boxers may be a little stubborn to begin with. But if trained with persistence from puppy-hood, Boxers will learn to let their hair (or fur) down.

If your Boxer grows up with your children, you can expect them to be their goofy self with the kids. It’s all part of their charm with kids.

Part of the reason why they’re so playful is because they like to stay busy. After proper socialization and training, you can let them help keep the older kids busy!

Boxers are unusually very patient dogs which means they will likely tolerate when kids do something which might irritate other dogs.

These dogs will let the kids have the upper hand, so to say. For this reason, some have called them great “nanny dogs.”

One owner tells us about her patient Boxer, saying:

Lucy (my Boxer) is sooo patient with the kids. She’ll lie down and let my 3 year old touch her face. It looks super annoying, but she’s fine with it…but only with the kid.

Although they’re relatively patient and affectionate dogs, they are still animals at the end of the day. Never let a young child play with a Boxer (or any dog) unsupervised.

No matter how long you’ve known a dog, you never know what may happen.

Boxers merely look aggressive but they are not dangerous when properly trained and socialized. People think they’re aggressive, but they’re just highly protective of their family.

The fact is, Boxers not only make superb companions, but also top guardians of the family and home. It’s in their nature to protect and guard.

Boxers had many jobs and roles in the past. However, guarding and protecting was one of them. Because of this, they still retain the protective instincts.

With their medium-large size and muscular build, it’s easy to wonder if Boxers can attack and actually harm members of the family.

But as long as Boxers are bought from responsible breeders and properly trained, they will be quite safe around everyone in the family, including kids and visitors.

Pitfalls of Raising Boxers With Children

With all their positive aspects, there are some issues you need to keep in mind if you are raising kids and planning to keep a Boxer in the home.

However, these minor pitfalls are far from “deal breakers” when it comes to the overarching decision of whether you should get a Boxer.

Size of a Boxer

A Boxer cannot help being a Boxer. It’s a medium to large-sized dog, though it’s not an extra large dog breed that can grow well over 100 pounds.

Still, the Boxer male can grow up to weigh as much as 80 pounds and as tall as 25 inches to the shoulder.

However, if you do own a Boxer and also happen to have infants or toddlers, just make sure to be present or have some adult supervision.

Watching your toddler and Boxer playfully interacting is a beautiful moment, but requires some caution.

Apart from their large-ish build, Boxers also possess an almost limitless amount of energy. They are working dog breeds, after all.

In our busy lives, if we fail to make sure the Boxer gets its daily dose of exercise, that pent up energy may be released while the Boxer is playing with a kid.

This may lead to unfortunate mishaps. For example, a Boxer may accidentally run into and hurt the child. The Boxer could also swipe its tail and again, incidentally, hit a kid in the face.

An overly active Boxer may be the quickest way to scaring your child from ever wanting to play with the dog. They need to be kept in check.

Do Boxers bark? Well, yes they do – like nearly every other dog breed. Fortunately, Boxers are not excessive barkers. However, they are very vocal dogs.

Instead of the traditional bark, Boxers make a deep growling sound. Actually, it’s this dog breed’s way of communicating with you!

Why do Boxers bark? That could be because of a few reasons:

Though Boxers are considered “low barkers,” they still bark. Plus, they have quite a deep and fierce-sounding bark.

If your infant is sensitive to loud noises, as many are, then Boxers may not be a good fit for your household with an infant.

There is somewhat a “learning curve” involved in bringing a dog home and getting him adjusted. Indeed, the same can be said about bringing home any pet.

With Boxers, the learning goes both ways. You need to train your human kids to show some respect towards the Boxer.

Additionally, you need to train the Boxer to tame some of its stubbornness to become a social and friendly companion.

Teaching Kids to Respect a Boxer

Boxers can be goofy, playful and endlessly patient as numerous gifs, pictures and videos will attest to. However, they may react aggressively if kids act too rough with the Boxer.

Even before you bring the Boxer home, it’s important to teach your children to respect the dog. Kids can be rowdy, but they still need to learn to tame it down with the Boxer.

Teach your kids not to tug on the Boxer’s ears as that will irritate the dog. They should never attempt to “ride” the dog too.

The most common thing young children do is pulling of the dog’s tail. All of these actions are a big no, as it may hurt the dog and cause a dangerous reaction.

Train the kids not to shout loudly within close range of the Boxer, as loud noise may irritate or frighten the dog.

Before letting your kids play with the Boxer, they need to understand and abide by these rules. If they are too young to understand, then it’s best to wait until they’re old enough.

Boxers are stubborn by nature, which makes their training a tricky affair. Still, it’s not impossible to accomplish.

You need to show your Boxer who’s the boss. If you want, you may also opt for a dog trainer. By training with care, consistency and patience, your Boxer will learn to act on your command.

Firm routines from early on will tell the Boxer that you are the Alpha male (or female) of the household.

While training, make ample use of rewards and positive reinforcement to let your Boxer know what makes you happy. If you are happy, your Boxer will learn what he or she needs to do.

Teaching a Boxer commands such as sit, down, come, stay and no is essential. With these commands engrained, it will be much easier to control your Boxer, especially while they play with kids.

Because Boxers have lots of energy, they’ll generally tend to behave well when they are well-exercised.

By eliminating the excess pent-up energy, they’ll be more calm, docile and friendly dogs. With that said, they need about 2 hours of physical exercise each day. Yes, it’s a lot.

Not all owners have the time to provide this. It’s why we highly recommend giving these dogs a big enclosed backyard to play around in.

Just don’t let your Boxer remain cooped up throughout the day in a tiny apartment where it has no way to exercise. These are better apartment dogs.

Mental activities may be just as important as physical activities. Failing to provide your Boxer with sufficient mental stimulation may result in a destructive dog.

And, no parent wants their kids to be around a “destructive” dog. This type of behavior is what commonly leads to aggressive behavior and potentially, dog attacks.

Mental stimulation can be achieved in many ways. The most common is obedience training. However, it can also be through dog puzzles, smart toys, hide and seek and more!

Not all owners have the time to provide mental stimulation every single day. So, I highly recommend getting them some puzzles.

Here are just a few of my dog’s favorite puzzles:

Dog puzzles and interactive toys are very important for every dog. Unless you want your dog begging you for attention, destroying your favorite pair of shoes, or being aggressive towards the kids, get them something.

Boxers love being around other people and other dogs. The best but probably least practical way for socialization is to acquire two Boxers so that they’ll keep each other busy.

If that’s not possible, introduce your Boxer to other dogs and humans in the dog park. It’s at this stage they need to meet as many people as possible. Only then will they be able to differentiate the “good” from the “bad.”

If your kids have friends over, bring out the dog for some play time! The more kids your dog gets to meet, the faster they’ll fall in love with them too.

Just make sure that you go over the rules with any child that interacts with your Boxer. Always supervise the encounter very closely too.

Boxers are an affectionate and intelligent dog breed with a robust work ethic. Train it well, show it loads of love and it will show ample love in return.

Do your research on Boxers before you purchase them. It’s important that they match your personality.

With consistent leadership provided by you, your Boxer will shine as the vigilant guard dog that it is meant to be – instead of the “dangerous dog” people make them out to be.

And with sufficient training, your Boxer will be plenty good with your kids in no time. You’ll witness a beautiful relationship develop between your Boxer and your child.

Tiffany is a product of Texas A&M College of Veterinary Medicine (class of 2022). Combined with over 5 years of veterinary technician experience, she's dedicated her life and career to dogs. When she's not studying or working, she's taking care of her Mini Australian Shepherd - Olympus! Read More.