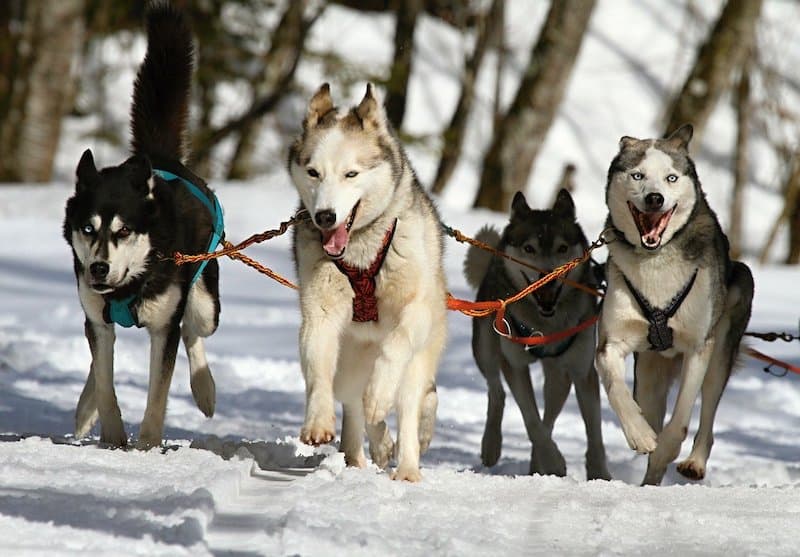 Huskies are beautiful, spirited dogs who make for wonderful household pets. They can be a little mischievous, though they’re always living life to the fullest. But with their furry coat and insatiable energy levels, you may be wondering what these dogs were bred to do.

So, what were Huskies bred for? Huskies were bred by the Chukchi people in Northeast Asia and Siberia to be sled dogs, reindeer-herding dogs, multi-purpose workers, companion dogs and guard dogs. Today, Huskies are primarily family companions, though many are still pulling sleds in Alaska and other snowy regions.

There’s so much about the Siberian Husky that you probably don’t know! We will help you understand the history and origins of Huskies, which will ultimately help you learn more on why Huskies behave the way that they do.

What Huskies Were Bred For

Huskies were originally bred by the Chukchi tribe, an indigenous group of people who live on the Chukchi Peninsula near Siberia. They are spitz-type dogs, sharing same physical qualities as other spitz dogs, such as Pomeranians and Malamutes.

However, Siberia was not a typical region. Not only was it geographically-closed off from the rest of the world, but the cold temperatures were harsh, especially during winter time. As such, the Chukchi had to breed a special type of dog for work.

Siberian Huskies were developed for the many obstacles that these arctic tribes had to face on the daily basis. As a result, the Chukchi bred these dogs for a few different purposes:

Huskies were primarily bred as sled dogs. Because the climatic conditions in the regions of the Chukchi began to change, hunting became increasingly difficult. For this reason, the Chukchi had to travel over large areas in search of new places to settle.

The arctic tribe bred Huskies to help drag sleds piled with their belongings over the large expanses of ice. Huskies were harnessed to a sled and would work together in packs to pull the sleds, thus making it much easier for their humans to travel.

Traveling without help wasn’t easy. The Chukchi people lived in freezing cold areas where temperatures often dropped well below zero degrees. Because of this, Huskies developed thick fur coats, incredible stamina, and the ability to store and conserve energy.

The desire in a good pulling dog is so strong that pulling is like an obsession. Same as herding with a border collie, etc. Most working lines of huskies have been bred to strengthen this desire.

Given their long history of pulling sleds, Huskies are still among the best sled dogs in the world. According to Canidae, they’re one of the three true sled dogs that we still have – in addition to the Eskimo Dog and Malamute.

Of the three breeds, Alaskan Malamutes have the most power. They were primarily used to pull heavier sleighs. However, Huskies were the fastest sled dogs, which made them ideal for search and rescue, emergency transport and long travel.

Who would have guessed that Siberian Huskies were bred for herding? And by herding, I mean reindeers, of all animals. Also called the Caribou, reindeers are a species of deer commonly found in the Arctic, where the Chukchi lived.

Reindeers were popular among the Chukchi because they provided many necessities for the tribe. Not only did they use their meat for food, but also the skin for clothing and tent covers. Reindeers were very much a part of their everyday life.

However, keeping these 300-pound wild beasts was no easy task. At least, without the help of the Siberian Husky. The dogs would drive herds of reindeer and direct them to the traps of the Chukchi, where people catch them by their antlers.

Today, people from the arctic still herd reindeer for the same necessities. And it’s not just the Chukchi people, but many tribes from the region. And although Huskies are still popular dogs for herding, other breeds partake in this task too.

The Chukchi’s Huskies were not only sled and herding dogs. They were also beloved family pets. In fact, almost every Chukchi family would have their own Husky. But for a tribe that needs these working dogs for everyday tasks, it isn’t too surprising.

In the home, they were considered members of the family and could be trusted even among young children. And given the affectionate and loyal temperaments of these dogs, it’s easy to see why.

On the field, Siberian Huskies were the difference-maker. There was so much trust put into these dogs with life and death situations. This meant that dogs needed a certain personality and work ethic to be reproduced. The Chukchi were highly selective.

As a result, Chukchi Huskies were highly motivated to work, but also calm and endearing in the home. The women of the tribe cared for these dogs, ensuring they had appropriate temperaments for families. This was essential because of the kids in the home.

Most Huskies aren’t great guard dogs. We think they make better watchdogs instead. Still, with the Chukchi, Siberian Huskies were guard dogs that protected the people and their reindeer from wild animals, such as wild wolves.

Huskies have alert, active personalities and would howl if they sensed anything out of the ordinary. In addition, they’re not small dogs either. A full adult-sized Husky can weigh up to 60 pounds and stand 24 inches tall.

There are definitely better options for guard dogs. However, the Chukchi people didn’t have the luxury of selecting the perfect breed. And considering they didn’t have security systems, alarms and law enforcement, Huskies were better than nothing.

The History of Huskies

The long history of the Siberian Husky is a murky one. Some historians believe that these dogs existed over 3,000 years ago, though there is no conclusive evidence on the earliest date they’ve been around.

And while the Chukchi had used Huskies as sled dogs for years, they began to generate more interest among the global community when mushers in Siberia and North America began to use them in competitive sled races.

The Siberian Husky lived thousands of years in the arctic circle – mostly in Siberia and the surrounding region. However, it wasn’t until the early 20th century when these dogs were brought to North America by fur traders.

Currently, there are no pure Siberian Huskies left in the region they were developed. Those dogs disappeared, along with most of the Chukchi, during The Great Purge of 1936. Luckily for us, a few Huskies made it to North America prior to the purges.

In fact, a number of Huskies had been purchased by famed fur trader, Olaf Swenson. The Michigan-native arctic explorer had spent many years fostering a good relationship with the Chukchi people. It’s said that he was the only one allowed into Chukchi territory.

Though there’s a lot of debate on whether he was first to introduce Siberian Huskies to America, Swenson was certainly one of the first. Some historians believed that these dogs arrived in Alaska as early as 1908 – two decades before Swenson’s dogs.

However, Swenson was a huge dog-sledding enthusiast. He regularly took his dogs on journeys that lasted weeks. But what made him famous was his work and writings on the qualities of a good sled dog. As such, he was a key figure in competitive sled racing.

Mushing is a sport or method of transportation which uses dogs like Huskies or Malamutes. In the early 1900s, mushing became popular in Alaska, colder regions of Northern America, northern Europe and the Alps.

Mushers quickly realized that Huskies were ideal for sled racing and began taking them out of the Chukchi’s homelands into other parts of the world. And since the early 1900s, the dog sport has continued in tradition and popularity.

In the state of Alaska, mushing is the official state sport. Plus, several organizations such as the International Sled Dog Racing Association (ISDRA) are working towards bringing the sport onto the international Olympic scene.

Huskies in the Gold Rush

The Siberian Huskies were believed to have been exported to Alaska in 1908, at the tail of the Nome Gold Rush. Huskies would transport raw materials, including gold from Nome, a city in Alaska, to Candle, a mining camp in Alaska.

During this time, Huskies made their name as outstanding working dogs that were capable of withstanding the harshness of Alaskan climate. And even after the gold rush, many dogs were kept in the state for other work.

In 1925, several groups of Huskies and mushers made history by saving a remote Alaskan town from a diphtheria epidemic. Roughly 20 teams of Huskies were vital in the delivery of the anti-toxin over 674 miles away.

The weather conditions were brutal, among the worst in history, and road transportation by car wasn’t possible. Fortunately, two of the world’s greatest sled dogs were on this team, named Balto and Togo.

The dogs and mushers completed the delivery in under 6 days, thus saving the town from a truly devastating incident. Because of this “serum run,” Huskies became internationally-recognized across the world and were applauded for their tenacity.

Even today, there’s a bronze statue of Balto, one of the Husky’s who led the run, in Central Park, New York. This act of courage will forever go down in the history books as one of the bravest display of our canine companions.

The Chukchi’s dogs were the direct ancestors of Huskies today. Though the modern Husky is slightly smaller than its Siberian ancestors, it still retains many of its ancestors’ qualities that we see today. Here’s what you can expect in a modern Husky.

Huskies are medium-sized dogs. Their distinctive features include their shaggy, thick coats, which kept them warm in sub-zero conditions, and their striking brown or blue eyes. These dogs also have erect ears and will have white markings on their fur.

Huskies are friendly, curious, and gentle. They’re intelligent, but can be stubborn and even disobedient. This is because they have lots of energy which they need to use up; they may not take to kindly to being told to stop running or jumping.

Thanks to their active temperaments, Huskies need at least 2 hours of exercise each day in order to maintain a happy and healthy life. And while they rarely bark, Huskies will howl instead. In fact, that’s just how they communicate.

What’s surprising is that Huskies also have a strong prey drive, despite not being bred for hunting. In the harsh temperatures of Siberia, food was scarce. As such, packs of Huskies used to hunt small prey together for survival.

Siberian Huskies today still have a hunting instinct. And while you can un-train instincts, you can train them not to hurt cats, squirrels, and other small pets in the home. However, with other dogs, they play great with.

Finally, because Siberian Huskies were bred as companions and pack dogs, they crave constant company. Today, they’re primarily bred for companionship, so this is even more important than ever. Make sure you have time for your Husky.

Should I Get a Husky?

Huskies have become more and more popular pets in recent years, but should you get a Husky? Popular shows like Game of Thrones have increased the demand for Huskies. But because of this, there’s also been a rise in abandoned Huskies.

So before getting a Husky, it’s important to consider whether a Husky is the right breed for you. We don’t need any more Huskies in our local shelters. Here are some reasons that a Husky may be a good choice:

If this sounds like the dog for you, I highly recommend going with a Siberian Husky. They’re loving dogs that thrive in loving home environments. And as long as you can shower these dogs with love, they’ll love you back.