Shar Peis may be one of the most unique dog breeds ever. With their oversized mouths and the signature wrinkled skin, these dogs tend to leave an aura of mystery. But the reality is, there’s a lot about the Shar Pei that you most likely didn’t know.

Like, did you know that a popular magazine literally saved the Shar Pei from the brink of extinction? Or that Shar Peis are one of the only 6 “basal” dog breeds in the world? Interested in learning why Shar Peis have purple and black tongues?

If questions like these intrigue you, stick around. In today’s article, we’re counting down the 10 most interesting Shar Pei facts that you didn’t know. And that all starts right here on The Smart Canine –  the only show that explores the most interesting stories and facts behind dogs.

10. Shar Peis are one of the most ancient dog breeds, ever.

Believe it or not, historians estimate that the Shar Pei has existed since the year 200 BC. However, it’s very possible they were around even earlier. This makes them one of the most ancient dog breeds ever! But how exactly do we know all this?

Archeologists in China have dug up statues that show an extremely close resemblance to the modern Shar Pei that we know today. It’s not a confirmation, but the unique traits of the Shar Pei make them hard to mistake. According to historians, these artifacts can be dated back over 2000 years ago.

So in reality, we don’t actually know for certain how ancient these dogs are. But what’s really interesting is that Shar Peis aren’t the oldest dogs on record. It’s believed that the Basenji has been around for over 6,000 years!

9. The Shar Pei is one of only six dog breeds in the world that’s considered a “basal breed.”

You must be wondering, what’s a basal breed? Not only do these dogs have to be “ancient,” but they need to have far less mixed DNA than our modern breeds. In other words, these dog breeds were developed in a much more organic and natural way.

Most of the dogs you see today were purpose-bred for an appearance or physical trait that helped them with their jobs in society. For example, like how Border Collies were bred with special shoulder blades that let them mimic a predator (a wolf) when herding sheep.

What’s more impressive is that there are only 6 of these basal breeds, including the Shar Pei. The other five include the Basenji, Akita Inu, Finnish Spitz and the Eurasier. That being said, it’s likely that the Shar Pei changed very little compared to how they were over two thousands years ago!

8. There’s a very specific purpose for the wrinkles of a Shar Pei.

It’s not hard picking out a Shar Pei in a crowd of dogs. You’re likely to quickly spot the heavy wrinkles that make them truly stand out. But have you ever wondered what the purpose of the wrinkles were? Spoiler: it’s not for good looks or to make them “cuter.”

We’ll skip over the confusing science-y part. So long story short, it’s because of the large amount of mucin in their skin that causes the deep wrinkles. But because their skin contains so much mucin, it serves two crucial purposes.

First, it creates a lot of flexibility and stretch in the skin. However, the downside is that the skin can get easily cut. But at the same time, if the skin ever tears, the mucin helps it heal extremely quickly with little to no scarring. Just think of them as the dog version of Wolverine!

In the past, Shar Peis spent a good deal of time as participants in dog fights and in hunts. And with the wrinkled skin, it makes it very hard for opposing dogs (or wild game) to bite and grab onto their skin. Plus, any tears on the skin will heal quickly for the next fight.

7. The Shar Pei has the most unique terms in its breed standard.

I think it’s safe to say that Shar Peis are truly unique dogs. No other dog breeds have physical qualities as striking and special as the Shar Pei. And it even reflects in their original breed standard.

For example, there’s the:

These are just some of the phrases used to describe the physical attributes of the Shar Pei. Historians don’t know exactly how all these names came about. However, most of the phrases came from the every-day objects that early Chinese Shar Pei breeders could relate to.

Like “Roof tile mouth” was coined because it resembled the old roof tiles used to build Chinese homes in the past. So, is there a breed standard as amazing as the Shar Pei’s? We don’t think so.

6. Shar Peis have one of the closest genetic relationships to the prehistoric wolves.

When you imagine dog breeds closely related to wolves, the Siberian Husky or Alaskan Malamute often come to mind. After all, they kinda do look like wolves. On the other hand, the Shar Pei with its wrinkled skin and large mouth looks to be the furthest away from the wolf.

But this simply isn’t true. According to a recent study, researchers took DNA samples from 414 dogs spanning over 80 different dog breeds. All in all, they found a handful of modern breeds that were the closest relatives to wolves.

The shocker wasn’t the Husky, Malamute, Samoyed, Akita or even the Afghan Hound. It was that the Shar Pei was part of the group too! Other dog breeds that researchers were surprised with include the Shih Tzu, Pekingese, and the Lhasa Apso.

Who would have thought these wrinkled canine companions could be so closely related to the vicious wild wolf of the past? We definitely wouldn’t have guessed it!

5. There are two types of Shar Peis, differentiated by the shape of their mouths.

Believe it or not, there are two varieties of Shar Peis. And while the signature wrinkled skin is present in both, the most noticeable difference between the two is the mouth. There’s the “meat mouth” Shar Pei. And then there’s the “bone mouth” Shar Pei.

These words describe the snout or muzzle of the Chinese Shar Pei. And although the history and origins of the Shar Pei is a bit murky, most historians seem to agree that the “bone mouth” variety is the original. “Bone mouths” were named as such because of the “dry” type of muzzle that they have.

On the other hand, “meat mouth” refers to the variety with a meatier mouth – for lack of a better word. Meat mouths tend to have heavier wrinkles and loose skin around their snouts, giving them the impression that there’s more “meat” on their snouts.

Most refer to bone mouths as the “Chinese variety,” whereas the meat mouth is the “American variety.” However, there is no mention of the two in the American kennel club’s official breed standard. So let us know in the comment section below, which variety do you have?

4. The Guinness Book of World Records once called the Shar Pei the “rarest dog in the world.”

As one of the top 75 most popular dog breeds in America, it’s hard to imagine the Shar Pei being listed as a “rare dog” – let alone the rarest in the world. But things were much different back then. In fact, there were only 8 known Shar Peis in America during the early 1970s.

In the 1973 edition of “The Guinness Book of World Records,” the Lowchen was listed as the rarest dog breed in the world. However, just five years later in 1978, the Chinese Shar Pei overtook the Lowchen for the top spot. So how did this happen?

When the communist party overtook China, it was not a great situation for dogs in general. Not only did the party slaughter thousands of dogs, but in the end, they imposed a hefty tax on dog ownership.

Unfortunately, this decimated the Shar Pei population that was once blooming in its motherland. This unfortunate and devastating situation nearly pushed these wonderful dogs to extinction.

If you own a Shar Pei today, you most likely have Life Magazine to thank for that. The 100 year old magazine company was one of the most influential magazines in the English-speaking world.

And in 1979, Life Magazine decided to put the Chinese Shar Pei on the cover of its magazine. Not only that, but a full-featured piece covering the now-famous plea of Hong Kong Shar Pei breeder, Matgo Law, was inserted into the magazine.

Law was concerned that Hong Kong would reunite with China after the communist party took over mainland China. And if that happened, some of the last few Shar Peis in the world would be subject to the strict regulations of the new political party.

After the magazine issue was published, the popularity of Shar Peis exploded in America. And by 1986, the Shar Pei registration numbers went from 8 to at least 13,000 in just a few short years. Needless to say, the revival campaign by Life Magazine worked.

What do Chow Chows, Giraffes, Polar bears, and Shar Peis have in common? They all have black and blue tongues! In fact, a black tongue is one of the most defining and famous physical traits of the Shar Pei. But have you ever wondered whether there was a purpose for it?

Well, according to Chinese Folklore, the black tongues of the Shar Pei were meant to ward off evil spirits and ghosts. With a Shar Pei in the home, the Chinese could rest easy knowing that their home was free of any unwanted spirits.

Another purpose of the black tongue was to make the dog look more vicious than they actually were. When dogs growl at you with a darkened tongue, most intruders and wild animals would simply not want to mess with such a scary-looking beast.

And because Shar Peis were primarily guard dogs and hunting dogs, it made a lot of sense for past-breeders to keep breeding for this tongue.

1. In Chinese mythology, there was a Shar Pei dog-god.

Chinese culture is famous for its folklore and myths. However, in one legend, there was a “dog god” who happened to be a Shar Pei. His name was “Panhu.” And folklore depicts this dog as having fur with five colors – similar to how the old ancient Chinese dragons were drawn.

As the legend goes, an ancient Chinese emperor offered a pot of gold, along with his daughter’s hand in marriage, to whomever could kill his nemesis for him. Panhu was up for the job. Not only did the dog-god bite off the head of the wanted enemy, but he also brought it back to the emperor.

In the end, Panhu married the princess and had six sons and six daughters. Eventually the offspring would grow up to become the famous twelve clans of Chinese mythology. But that’s a story for another time.

Now that you know Shar Peis were treated as royalty, it may actually explain a lot about your dog’s behavior.

So which Shar Pei fact was your favorite? Did we miss any that deserve to be on this list? Let us know in the comments section below. 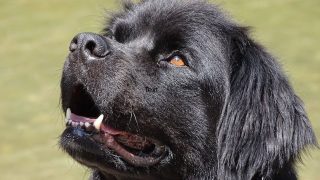 ← Previous
10 Most Interesting Newfoundland Dog Facts You Should Know 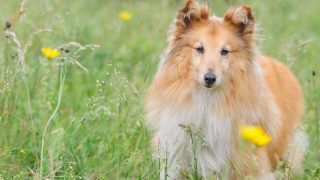