Whippets are undeniably some of the best athletes in the animal kingdom. They can do it all – from running at high speeds to jumping. While they’re impressive on the field, they can also be sweet dogs in the home. But there’s a lot to the Whippet than just their God-given natural abilities.

Did you know that the Whippet has the highest number of sports-related world records of any dog breed? Are you interested in learning how fast a Whippet can run and why they’re able to achieve such high speeds? Curious to know why Whippets are called the “poor man’s Greyhound?”

If questions like these intrigue you, stick around. In today’s article, we’re counting down 10 quick (and interesting) facts about the Whippet dog. And that all starts right now, on The Smart Canine – the only show that explores the most interesting stories and facts behind dogs.

10. Whippets are one of the fastest dog breeds in the world.

We felt like it was necessary to mention this fact first: Whippets are fast. And as you’ll see in the rest of the article, these dogs are some of the best athletes in the canine kingdom. And as a result, they’ve managed to set some of the most impressive world records for dogs.

So just how fast are Whippet dogs? On average, Whippets can reach an astounding 34 miles per hour. But that’s just the average. In fact, it’s possible for some Whippets to hit a top speed of 40 miles per hour – but of course, that is only when running in full stride.

This makes this breed one of the fastest in the world. For reference, Greyhounds are universally recognized as the single fastest dog breed. As such, Greyhounds have a top speed of 45 miles per hour. So in reality, the Whippet isn’t that far behind.

9. The fastest individual dog in America, and probably the world, is a Whippet.

Greyhounds may be the fastest breed in the world, but a Whippet named Reas is the fastest individual dog in the world. In December of 2021, the 3 year old male Whippet ran the 100 yard dash, finishing with an incredible time of 5.769 seconds!

For reference, a mixed dog set the record with a time of 6.485 seconds in 2020. Reas was so fast that he beat the previous year’s champion by more than half a second!

Usain Bolt, also known as the “fastest man alive,” has a personal best record of 9.56 seconds for the 100 meter dash. Reas would embarrass Usain Bolt any day.

8. One Whippet is the greatest frisbee catcher of all time.

Yet another impressive record was set by a Whippet named Davy. Since Davy set the Guinness world record for “longest flying disc catch” in 2012, no dog has even come close to touching it.

The dog set the record in Canada and was able to catch a frisbee thrown 134 yards – or 402 feet! What’s even more impressive is that he reached a top speed of 40 miles per hour to do so. With such incredible speed, it only took Davy about 10 and a half seconds to make the catch!

Davy has become sort of a superstar in the canine community. In fact, Davy even has his own children’s book called “The Davy Rule,” where the frisbee champion covers important topics regarding kindness, curiosity and acceptance of others.

7. There’s a reason why they were nicknamed the “poor man’s Greyhound.”

If you didn’t already know, Whippets were called the “poor man’s Greyhound” in the past. Make no mistake, this was not a jab at the Whippet. If you understand the Whippets’ history, then this nickname makes a lot of sense.

You see, in the early 20th century, dog racing was a huge sport in England. And the main racing dog breed of choice was none other than the Greyhound. But the problem was that Greyhound racing was primarily something for the wealthy to participate in.

Even so, the “poor” working class of the textile industry wanted to participate in dog racing. They did so by creating their own “race tracks.” The men would clear out empty lots, back alleys or empty fields to use as tracks. They did not have fancy oval tracks.

And because Greyhounds were generally more expensive to breed, the working class used Whippets as their racing dogs instead. Real soon, the men realized that Whippets were just as fast as Greyhounds!

Since then, times have changed. These fancy oval track races today now feature a large number of Whippet dogs in the biggest racing competitions.

6. A Whippet is the fastest balloon-popper in the world.

100 balloons would be lined up in a 10 by 10 square, and the dog would crush each and every balloon as quickly as possible. Now you may remember a viral video of a Jack Russell Terrier, named Twinkie, popping 100 balloons in roughly 39 seconds.

According to the owner, a lot of preparation and training was involved. She would never cheer for Toby by name because he would just come back to her. The owner also practices with blue and yellow balloons, as it’s theorized that those colors are the easiest for dogs to see.

So do you think your Whippet is up to this challenge?

If you’re like me and can’t stand the constant barking of some dogs, then you’re in luck with the Whippet. Whippets are some of the quietest dog breeds you can find. It’s why they make such amazing apartment dogs, as long as you give them enough exercise.

And according to Newsweek, they’re one of the quietest small dogs you can find. However, that’s not to say that the Whippets don’t bark at all. They certainly do. But they’re much more of a watchdog, a huge part thanks to their old hunting instincts.

Before arriving in America, Whippets were sighthounds that hunt with their sight and speed. They needed to be extra quiet, so as not to scare off any potential game. So if your Whippet starts barking out of nowhere, you better go check it out. These dogs don’t really “cry wolf” for no reason.

4. There are a lot of theories on how the Whippet got its name and the meaning behind it.

Like many dog breeds, the Whippet’s name has remained a mystery – though with plenty of good theories and speculation. According to one etymologist, the true origin of the name comes from the word, “via.” For those that understand Latin, it’s the Latin word for “road.”

As such, it’s become the root of many words, such as “convey,” “trivial,” “vibrate” and of course, “whip.” Whip has been associated with all things that tend to move quick and fast. Given the nimbleness and speed of the Whippet, it sure makes a lot of sense.

But that’s not the only theory. The Oxford Dictionary suggests that the word came partly from an obsolete early 17th century word that translates to “move briskly”

However the word “Whippet” did exist before the 17th century. According to the Oxford Dictionary, “Whippet” used to mean “a lively young woman; or a light wench.” But for some reason, the meaning of the word has changed a few times throughout the centuries.

3. Whippets are able to smell when a diabetes attack is about to happen in a person.

There’s more to the Whippets than just being superb athletes and lightning-fast runners. Yes, they’re technically sighthounds that hunt primarily with their sight. However, did you know they have an amazing sense of smell too?

A 13 year old Whippet, named Holly, had been trained to alert her owner when she’s about to have a diabetes attack. Believe it or not, this Whippet can actually use her sense of smell to detect a significant drop in blood sugar levels.

When that happens, the chemical makeup of the human’s breath changes. It’s subtle, but a highly trained and capable dog can certainly pick it up.

Whenever Holly’s owner begins to show signs of a dangerously low blood sugar level, Holly gets in her face to let her know something is wrong. Most of the time, Holly alerts her before any symptoms even show up – giving her time to prepare.

According to the owner, Holly has woken her up many times throughout the night and has probably saved her life countless times too.

2. There’s an athletic Whippet that’s been nicknamed the “Michael Jordan of dogs.”

Given the insane athletic nature of the Whippet, it should be no surprise that the breed also holds the record for the “furthest jump by a dog.” A Whippet named “Spitfire” has been appropriately nicknamed the “Michael Jordan of dogs” by ESPN.

It’s not just because he can jump extremely far. Rather, it’s that he can do it all, making him arguably the most athletic individual dog in the world. He was the first dog to jump 31 feet off a dock, which was an untouchable world record at the time.

However, Spitfire also holds the record for “speed retrieving,” in which the dog jumps off a dock into a pool of water, swims to the other side, and retrieves an object. Spitfire crushed this event by being the first dog ever under 4 seconds.

And let’s not forget what took Michael Jordan to the next level. The insane vertical jump of Spitfire is also a world record. In fact, Spitfire has a remarkable 8 foot vertical!

So is there a dog as impressive as this Whippet? We don’t think so.

1. The only reason why Whippets can reach such high speeds is because of the shape of the dog.

Now that we’ve been reminded several times just how fast and athletic these dogs are, the next question is…”how?” How is it that Whippets are able to run so fast and jump so high? Well, it’s all in the body.

According to the AKC breed standard, the Whippet has a “gentle arch” on its back. This arch is not for show, but for function. When these dogs are running in full stride, they’re in a double suspension gallop.

In other words, these dogs are always in a concave or convex movement while running hard. They either have their legs fully extended or curled up beneath the body. Whippets need to be in a slight arch shape to move like this. Dogs with a rigid spine simply don’t have the flexibility to run hard.

So what was your favorite Whippet fact? Did we miss any good ones that deserve to be on this list? Let us know in the comments section below! 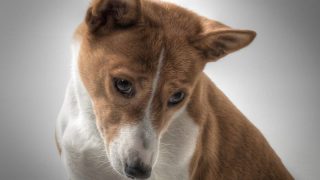