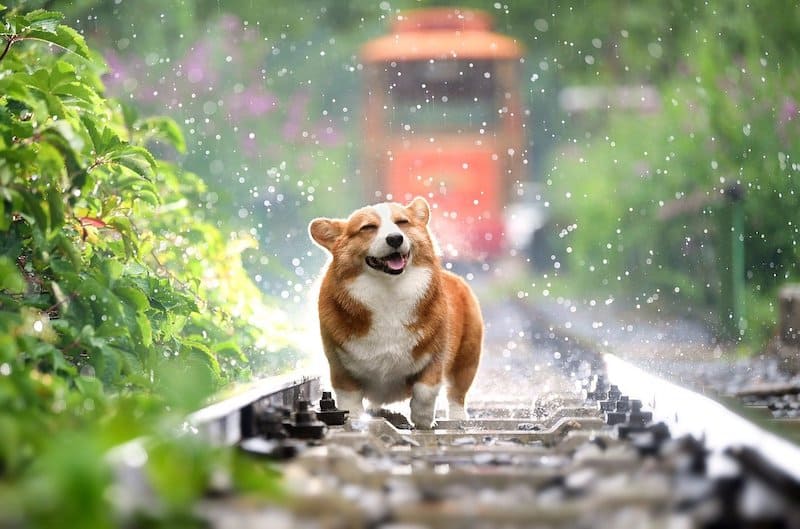 Well, it’s all true…that is, if you believe in welsh folklore.

In this article, we’ll be exploring one of the most ridiculous (but entertaining) of Welsh legends with the discovery of the Pembroke Welsh Corgis.

At first glance, you’d see nothing more than an adorable and fluffy dog. With their long bodies, short stubby legs and long ears, Corgis have undeniably become one of the internet’s favorite dog breeds.

They’re affectionate, friendly and outgoing dogs with soft-spot for their owners. And in the home, they’re extremely playful and fiercely protective of their loved ones.

But don’t be fooled. These oddly-shaped dogs are tenacious and spirited animals with one of the best work ethics in the canine kingdom. In fact, it’s why they’re regarded as some of the best herding dogs in the world.

But the origin story and history of the Welsh Corgi is a mysterious one – one full of interesting Welsh folklore, fantasy and fairy tales… quite literally.

Are Corgis like every other dog breed that originated from the prehistoric wolves? Or did they come from something a bit more…mythical?

To truly understand this old folklore of how fairies gave us the Corgi, we have to go back to the 1940s when the Poet, Anne Biddlecombe of Dorset England, first published a poem called “Corgi Fantasy.”

In this poem, Anne describes Corgis as magical creatures developed by the fairies and given to the mortals as a gift.

Not only was Anne a famous Pembroke Corgi breeder, but also the founding member of the Welsh Corgi League of London. Needless to say, she had a ton of influence in Great Britain’s Corgi community.

And as the popularity of the Corgi grew in Wales, this legendary story gained momentum, having been passed along for several generations into the homes of Corgi owners and fans all around the world.

It’s worth noting that there are many versions of this legend. And despite popular belief, this legend involves only the Pembroke Welsh Corgi – and not the Cardigan variety.

Folklore #1: From the King & Queen

The legend of the fairies and corgis can be traced back to the ancient times of Wales. Back then, these magical creatures lived in harmony with the surrounding woodlands of Wales.

And while fairies could undoubtedly fly, they didn’t have the stamina or the wing strength to fly long distances.

What was their solution? To create a companion traveler who they could ride upon to travel further distances – much like how past-humans relied on horses for long distance traveling.

And as you may have guessed, this companion created by the fairies was none other than the Pembroke Welsh Corgi.

However, one day, while the Queen and King of the fairies were riding their Corgis, they noticed a family of humans doing hard and laborious work just to keep themselves fed.

Every time they rode by, they would see the same family working with little time to rest and enjoy life.

The King and Queen fairies were compassionate mythical creatures and were overwhelmed with pity and sadness for the poor humans.

But in that moment, distracted by the depressing scene, the King stumbled and fell off his Corgi. Quickly, the Queen abandoned her own Corgi to tend to the King.

And although the two fairies were fine, their companion Corgis didn’t even notice their fairies falling off. Instead, they continued riding off into the sunset.

Concerned about the Corgis getting lost, the King immediately called for a search party to bring the two back. However the Queen stopped him, saying, “there’s no need – the Corgis will find the mortal humans who may need them more than us.”

And of course, the corgis eventually wandered into the poor family’s farm, where the kids brought them into home to show their parents.

They knew instantly that these strange and magical animals were gifts from the fairies of the woods.

From that point on, the corgis became invaluable helpers on the farm and cherished by all the people of Wales.

Another commonly-told tale of the discovery of Corgis involves two lucky children. On a bright sunny day, the two children were off playing in the woodlands of Wales when they stumbled upon two Corgis.

At first, they didn’t think too much, mistaking these mythical creatures for mere foxes. After all, the Corgi’s pointed ears, classic red coat and sharp nose look eerily similar to that of a fox.

After playing with the Corgis for a day, the two children decided to take them home. Their father then tells them that the dogs are actually gifts from the fairies.

How did he know this? He points out the fairy saddles still on the dogs’ backs, explaining that fairies would ride them and use them to pull coaches or herd cows.

Another version of this legend starts with a fairy war. Two fairy tribes, the Tylwyth Teg and the Gwyllion fairies, had just fought in one of the biggest wars in the mythical kingdom.

In times of war, Corgis acted as more than just working dogs and travel companions. They were the noble steeds that fairies rode onto the battlefield.

They were quick enough to attack, but also sturdy enough to withstand the magical firepower – at least, according to the legend.

But unfortunately, two Tylwyth Teg fairies were killed during this battle.

So while the tribe was having the funeral for the fallen fairies, two children playing in the woods stumbled upon the ceremony. Overwhelmed with emotion, the tribe offered to give the two kids the Corgis that belonged to the now-deceased soldiers.

And as the Corgis were passed onto the children, a fairy spoke fondly of the dogs’ talents, saying “they are trained warriors in their own right, but they are more than warriors: they are great helpers for the fairy folk.”

The fairy dogs were perfect for herding cows, he explained. Their short stature kept them out of the way of flying hooves when they nipped at angry cows’ heels.

Why This (Kind of) Makes Sense

But as ridiculous as this legend may seem, it may actually explain a lot about the Pembroke Welsh Corgi.

For starters, the word “cor” in Welsh actually translates to “dwarf” in English, while the word “gi” translates to “dog.” When put together, the direct translation of Corgi is “dwarf dogs!” The dwarf must be referring to the fairies, right?

The high energy and short stature of the battle-forged Corgi would be excellent in combat and on the battlegrounds of the much smaller fairies.

And if you know Corgis, you know they can be quite destructive at times, especially when they don’t get the necessary mental and physical exercise that they need.

Also, most corgis tend to have a darker patch of fur under their shoulders that resembles a mark of the saddle.

It’s really a lighter marking on each side of the withers that’s actually caused by changes in the thickness, length, and direction of hair growth.

In fact, that patch of fur is often still called the “fairy saddle” today!

And if corgis have a tendency to get nippy, well, that’s because fairies don’t really give gifts without strings attached.

It’s believed that putting an iron collar on your corgi will keep the dog from biting its owner, since fairies are naturally averse to those metals. In folklore legend, iron counteracts magic, thus leaving the fairies unprotected.

Where Corgis Actually Came From

So do all these signs point to Corgis coming from the magical fairies? Probably not. In the words of the poet, Anne Biddlecombe, this legend is likely just a “corgi fantasy.”

But perhaps there’s a more natural and ordinary explanation for the origins of the Pembroke Welsh Corgi.

Realistically, the Pembroke Welsh Corgi probably came from Flemish weavers who in the 12th century, settled down in Pembrokeshire of South Wales.

They brought with them the ancestors of the Corgis, who were bred with the local cattle dogs, thus adding the spitz-like physical features and the tenacity that we often see with this world-class herding dog.

However, other historians believe that Corgis were likely the companion dogs of Scandinavian raiders, who brought these dogs with them to the British Isles several hundreds of years ago.

Just take a look at the Swedish Vallhund and you’ll notice the eerie resemblance between the two breeds, suggesting that the Vallhunds were bred with local Welsh dogs to develop the modern Corgi that we know and love today.

But because historians can’t seem to definitively agree on the true origins of these odd-looking fur-ball Corgis, we can’t completely rule out the fact that Corgis came from fairies, right?

Leave a comment and tell us what you think! Where do you think Corgis actually originate from?

Could these mythical fairies have given us the Welsh Corgi or did they come from a much more natural cause?

Make sure to share this article with your Corgi-loving friends.