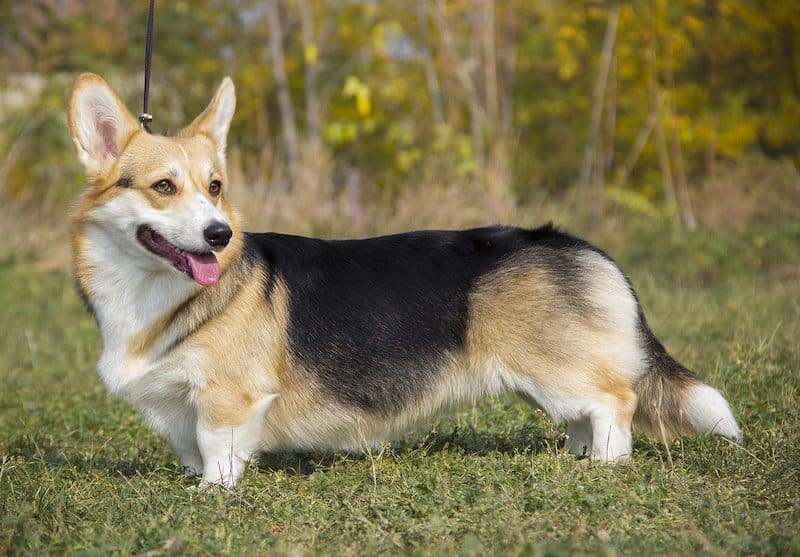 Those tiny legs are a defining trait of the Welsh Corgis – seen in both Pembrokes and Cardigans. You certainly can’t miss them in a crowd. And while the short legs may not be the most functional trait, you can’t deny the “cuteness.”

But why do Corgis have short legs? It’s no accident that Corgis has short legs. Like other dogs with short legs, Corgis has a type of dwarfism called Chondrodysplasia. Originally a genetic mutation, it now is a core part of what makes a Corgi a Corgi. Without their short legs, they would be an entirely different dog.

Ok, but when did this start? Have Corgis always had short legs? Is this good or bad for their health? All of these are excellent questions, especially for Corgi owners. Read on to learn more about Corgis and their short legs.

RECOMMENDED: 7 Things to Know Before Getting a Corgi

Corgis having short legs is a prime example of a purposeful accident. Ultimately, their short legs are caused by a genetic mutation. At some point in history, a gene mutated and started shortening the legs of these Welsh Corgis.

But dog breeders were not ones to pass over such an opportunity. Needless to say, short legs might not be useful for long jumps or climbing. And with shorter legs leading to shorter strides, they aren’t all that great for running either.

But they are perfect for herding, which is what the first short-legged corgis were bred for about 300 years ago.

However, Corgis may have been around in one form or another for around 3,000 years. Specifically, that is the Cardigan Welsh Corgi, thought to have been brought to Wales by a tribe of warrior Celts.

In fact, some Welsh folks believe these dogs were developed by fairies much longer before, though I think it’s safe to say that those are mere folklore and legends. Still a pretty impressive history of these dogs if you ask us.

Herding sheep and cattle is a tough job, especially for dogs. They are almost always quite smaller than the animals they herd, so they are at risk of being hit with stray kicks.

But a short little Corgi can literally run around below these kicks, effectively dodging any injury that may be fatal. In other words, this kept them safe while they did their past jobs.

For Corgi owners that lived on farms, this was a huge advantage. It meant less risk to their herding dogs, so they could keep their cattle herded more effectively.

This is similar to how Corgis would have their tails docked in the past. No tail means that they’re able to herd without the risk of an angry cow stomping on the tail. However, whether this was effective still remains to be seen.

So, as the Corgis’ legs got shorter, breeders continued to encourage this trait. They worked to breed shorter and shorter canines until we have the little stout Corgis you see today.

CORGI FACT: Modern corgis are usually under one foot in height!

Without getting too technical into the medical field, there is a single gene that encourages the growth of short legs. It is called the FGF4.

If this gene is active, it can result in a condition called achondroplastic dwarfish. You have likely heard of other breeds with short legs, such as Dachshunds or Basset Hounds.

And yes, you guessed it. They also have this same condition resulting from the same gene. But while this is indeed a genetic mutation, it’s not necessarily bad. However, having short legs does come with some side-effects.

Is Having Short Legs Bad for a Corgi?

When performing their job as herding dogs, short legs certainly were a benefit to Corgis. After all, being able to duck beneath a kicking cow can come in quite handy.

But there is a trade-off. A Corgi’s short legs don’t pair well with the rest of its body – no matter how cute and adorable we think it is. As a result, this mismatch means they can be at risk for some medical conditions.

Corgis Can Have Back Problems

A long body and short legs do not go well together. However, this is the “ideal” shape of the Welsh Corgis. At the very least, it’s not great for keeping your back healthy.

As such, Corgis are often more at risk for back problems than other, normal-legged breeds. This imbalance between leg and body length puts a good deal of stress on their spine.

This is especially worsened when these energetic dogs jump from the couch to the floor, or from your bed to the ground. Over time, this puts an immense amount of pressure on the hips and backs of your Welsh Corgi.

This can lead to Corgis developing herniated discs, which can be a common health concern with the Corgis. This dangerous condition can come about suddenly from an injury, though it is more likely to develop over time.

In either case, it is important to speak with your vet about your corgi’s back health. If they do have a herniated disc, it can lead to a range of problems including:

A Corgis disproportionate legs also make it vulnerable to degenerative myelopathy. This nerve condition starts in the spine and can progress to cause further problems. In the end, this can even lead to paralysis in all limbs.

Regular Vet Checks Are a Must

Fortunately, many, many Corgis never run into any of these problems. Instead, they live their whole lives healthy and happy. However, that does not mean you shouldn’t be cautious and wary of these health conditions.

Still, we recommend having regular checkups. They’re going to be vital if you want to own a Corgi. And if you spot any spine or back problems, treating them early can lessen the danger and long term damage in your dog.

These are just a few things to put into practice with your Corgi. But even so, there is no guarantee that the dog won’t develop problems with their short legs. Remember to visit your local vet if and when anything feels off.

Can Corgis Pass Their Short Legs On to Their Puppies?

Now you know short legs are genetic, so you may wonder what happens if you were to breed a Corgi with another dog breed.

Short answer: you likely will get a hybrid breed that also has short legs. Start imagining the possibilities now!

Short-legged Husky: absolutely! (In fact, you may want to check out the Horgi, the Siberian Husky and Welsh Corgi mix!)

All kinds of short-legged hybrids: of course!

In fact, there are dozens of corgi mixes that will absolutely melt your heart. Almost all of them will have those trademark short legs.

CORGI MIX REMINDER: If your corgi mix also has short legs, they will also be at risk for the same back problems as a purebred corgi. So make sure those vet visits and checkups are happening!

Just because a Corgi has short legs does not mean they aren’t athletes. Anyone who has seen a Corgi run knows they can hustle. And can you believe that there are Corgi races held every year?

Their short legs won’t let them win any high-jump competitions, but they have a wicked agility. Which makes sense, as they were bred for herding cattle (a job that requires being fleet-footed).

So if you have a Corgi, remember that they still need plenty of exercise. Taking them out on walks and runs will be very important to keeping their bodies and minds healthy. After all, they were bred to basically run at animals.

But be sure that the exercises are suitable for them. Keep in mind their back, and design exercises that put as little strain on it as possible. For example, running on grass (as opposed to cement) will put a lot less stress of their bodies.

Can Corgis Participate in Performance Events with Their Short Legs?

Absolutely! Not only can Corgis participate in performance events, but they can excel in them. In fact, quite a few Corgis did well in past agility championships.

Their natural intelligence gives them a keen mind that allows for quick learning. And their herding instincts allow them to zip and zag around with incredible agility.

They have shown both enthusiasm and success in performance courses. They tend to dominate in competitions for their size, and even make their owners struggle to keep up with them.

Can Corgis Have Long Legs?

Currently, it doesn’t look like you will be seeing any long-legged Corgi breeds. Though Corgis once had longer legs, this has long been selectively bred out of them.

Now, their short-legged gene tends to prove dominant. So, even when mixed with long-legged breeds, the puppies will have short legs.

It would likely take a lot of effort and years of breeding to see any long-legged corgis running around. But, so long as their short-legged appearance continues to capture hearts and minds, we don’t see that happening.

Still, it is not out of the question that there are longer-legged corgis out there. They simply would be either extremely rare or a mixture of breeds and likely not look much like a corgi.

NEVER GIVE UP ON GENES: Just like how a corgis short legs came about from a genetic mutation, the opposite is still possible. Mutations are unpredictable now, but advancements in science might allow us to control them better. So a long-legged corgi might one day make an appearance once more.

Do All Corgis Have the Same Short Legs?

All Corgis fall within a certain range. Usually about 10-12 inches in height. However, there can still be some variation in this.

So not all Corgis have the same shortness of legs. Some will be extra short, while others might look almost not so short and stumpy.

Still, the vast majority of corgis will fall within that 10-12 inch range once they reach adulthood. Sometimes their fluff can make them look a bit taller though.

Do you have a corgi or a corgi hybrid? If so, let us know about it in the comments below. We would love to hear stories about your corgis and any adorable situations that have arisen because of their short legs. If you have any additional questions about corgis, let us know and we will provide answers!