What Were Golden Retrievers Bred For? – Hunting History, Jobs & Roles

The Golden Retriever is an incredibly charming dog. Combined with its friendly nature, this breed’s charm has made it the preferred pet in many American homes (3rd most popular in America). But was the Golden always meant to be just a friendly family pet?

So, what were Golden Retrievers bred for? The Golden Retriever was bred to recover game from bushes, cliffs, and bodies of water from long distances away. On the field, they specialize in retrieving waterfowl (aquatic birds), such as ducks. However, these friendly dogs are primarily bred for companionship today.

Golden Retrievers are hunting dogs turned family sweet hearts. To really understand how a hunting dog ended up being the subject of cuddle and companionship for humans and other pets in innumerable homes, read on.

The traits of agrarian societies were still prominent during the 19th century. By that, i’m referring to wildfowl hunting with shotguns, which was a common pastime of the most elite Scottish families.

But Scotland did not have hunting-friendly geography on every corner. Shot wildfowl would often land on swampy spots, in rivers, or a long distance from the hunter. Some wild ducks were also shot right on the water where they swam.

Scottish hunters found themselves facing the dilemma of using dog breeds that were not up to the task of retrieving game from such places. Some weren’t capable swimmers while others weren’t athletic enough. Some hybridization had to be done.

For the history-geeks, you’ll remember that Britain was a pioneer of industrialization in the 17th to 18th century. So, improving life and the efficiency with which work was done was in the blood of Britons.

As such, it was obvious for the Scottish hunters to think about refining the retrieving skill of a dog breed imported in 1865 from Brighton, south coast of England, courtesy of Lord Tweedmouth.

Nous, the imported canine, was slow and needed to be made hunting-efficient. So he was bred with Belle, a Water Spaniel. And just like that, the resulting four puppies became the descendants of today’s ‘Belle’ Golden Retrievers.

Why Goldens are great retrieving dogs

Because the crossbreed outcome was a perfect sportive dog fit for retrieving game, the Golden Retriever continued to be bred and was soon adopted in other parts of the globe, including the United States.

Want to see the Golden Retriever in action? Check out this amazing dog retrieving ducks and other waterfowl for his human hunters:

Why the Modern Golden Retriever is Bred for Companionship

Today’s Golden Retriever readily rings the ‘pet’ rather than the ‘hunter’ bell. Why and how has this sportive and soft-mouth retriever turned into a family pet?

First of all, there are fewer hunters today than there were in the 19th century. A national survey by the US Fish and Wildlife Services in 2016 indicated that fewer people are hunting than ever before.

They estimate that only 4% of Americans aged 16 years and above are still hunting for sport. Logic would deduce that hunters are even scarcer several years down the line.

If that is the case, fewer people are also purchasing a Golden Retriever for hunting and retrieving purposes. Instead, the Golden has built fame as America’s most iconic family companion and pet.

Humans have discovered the friendly personality of Golden Retrievers

The Golden Retrievers we know today are friendly dogs, fond of both people and all types of animals. That makes them perfect companions, which explains why they’re so common in families as pets.

The friendly nature of Golden Retrievers has also made the breed famous in therapy and emotion support contexts. According to Wikipedia, “Golden Retrievers are often used as therapy dogs due to their calm demeanor, gentle disposition, and friendliness to strangers.”

In fact, the Golden Retriever is named among the top 10 therapy dogs. Therapy dogs are dog breeds that can be easily trained to provide love and affection to the sick and elderly in homes, hospices, retirement homes, disaster sites, and more. And clearly, the Golden is well-suited to this role.

Kids can be rough and rowdy around dogs. For these reasons, not all dog breeds are suited to play with children. Some dogs can potentially injure kids, though some kids can also injure the dogs.

For example, many large dogs were bred to protect and guard, which means they might have aggressive tendencies. Extra large dog breeds, such as the Great Dane, are likely to unintentionally knock over a small child.

On the other hand, small or toy dog breeds can be fragile and may not be able to handle the rough play of children. Some small dogs are known to “snap back” at children too.

Goldens are incredibly patient dogs, which is great for little kids still learning boundaries (like pulling ears and grabbing tails).

The Golden Retriever, however, has the sturdiness, size, temperament and patience to be excellent playmates. There’s a reason why they’re such popular dogs among American families.

Golden Retrievers are as gentle as they come. While they can be energetic during play time, they’re incredibly adaptable and know their own boundaries. It’s safe to say, most Goldens will get along great with your kids.

Friendly with other pets of the home

When they say, “Golden Retrievers can befriend anyone,” they literally meant everyone. Not only are they great with humans, but they get along just great with other pets of the home.

As many dogs as there are in America, there are a lot of cats too. And according to the American Pet Product Association, there are more cats in American households than there are dogs.

Our golden retriever girl takes good care of our cat. They’ll even cuddle with each other when they take their naps!

Fortunately, Golden Retrievers are great with cats too! Being a cat-friendly dog breed is another huge reason for the Golden Retriever’s prevalence in American families.

There’s no guarantee that the cat will like the dog, but the Golden will certainly enjoy the cat’s company. For these dogs, every living thing is their “friend.”

Is Today’s Golden Retriever Still Deserving of its Original Glory?

Although people hunt less today and the Golden Retriever is widely perceived as a pet dog due to its friendliness, the breed has not lost its original skills as a hunting dog.

Hunting and retrieving is the Golden Retriever’s instinctive intelligence. No matter what, it will always be their instincts. As such, the Golden’s retrieving and hunting skills can still be noticed in the following features.

They are sporting dogs that need plenty of exercise

As hunting dogs, Goldens had to run fast and walk for long hours with their hunting asters. Today, these high-energy hunting dogs still require plenty of exercise.

They need an hour of exercise per day at minimum, though more is recommended if you can handle it. The best way to go about this is to make it less of a chore, but more of a fun activity to build a stronger bond.

If Goldens don’t get their allotted daily exercise, they can become moody and destructive. Exercises such as hiking, swimming and games like fetch and catch are perfect for the athletic and agile Golden Retriever.

Besides, Golden Retrievers are often involved in sporting competitions in high-energy games like flyball, dock diving, rally obedience, disc dog competition, and retrieving trials, among others.

The AKC conducts Retriever Field Trials every year to measure retrieving abilities of dogs. Their retrieving speed is measured at field distances longer than what Retrievers would have to cover in an ordinary hunting test.

You might have read about hero Golden Retrievers who have done extraordinary acts all around the world. From saving drowning animals and humans in danger, to instinctively rushing to the rescue of victims in disaster spots.

From the outside looking in, Golden Retrievers seem like a dog breed with a sensitive heart and selfless giving. While this is true, these dogs are just doing what they know best, that is, retrieving.

Their instinct to retrieve can be so strong! Mine once spent 15 minutes looking for a lost ball. I offered him a different ball, he dropped it and went back to the search.

Do you know why Golden Retrievers love playing fetch so much? It’s because retrieving the ball or frisbee is what they were developed to do. It’s rare to find a Golden that needs to be taught to play fetch.

And according to many owners, these dogs will retrieve you random objects, such as rocks or branches. Literally whatever they can find.

Irrespective of the small percentage of people that go hunting today, the Golden Retriever still lists as an excellent hunting companion. The canine is trained not just to retrieve the game but also to sniff and flush it out.

Their soft mouth can still carry objects without damaging them just as they would with the game during hunting. It is said that a Golden Retriever can carry a raw egg and deliver it to the destination without breaking the shell.

In addition, Golden Retrievers are not scared by the sound of a gun and will stick with the hunter to offer companionship and the game retrieval service.

So if you want to go hunting with your Golden Retriever, they are still excellent choices. With only little training, they’ll be able to retrieve ducks for you in no time!

The Golden Retrievers were bred first in Scotland for hunting roles. Their soft mouth, swimming skills, and fast speed made them fit for retrieving game and delivering it to the hunter without damage.

Because there are fewer hunters today, the friendly nature of Golden Retrievers has made them famous family pets and service dogs, capable of saving the lives of both humans and other animals.

The original hunting traits of Golden Retrievers are still manifested in the breed’s high-energy nature that requires them to engage in a lot of exercises daily. Besides, the Golden still lifts objects with its mouth and delivers them safely.

And when it’s lucky to be owned by a hunter, The Golden will still carry out its hunting duties of retrieving and flushing out game. 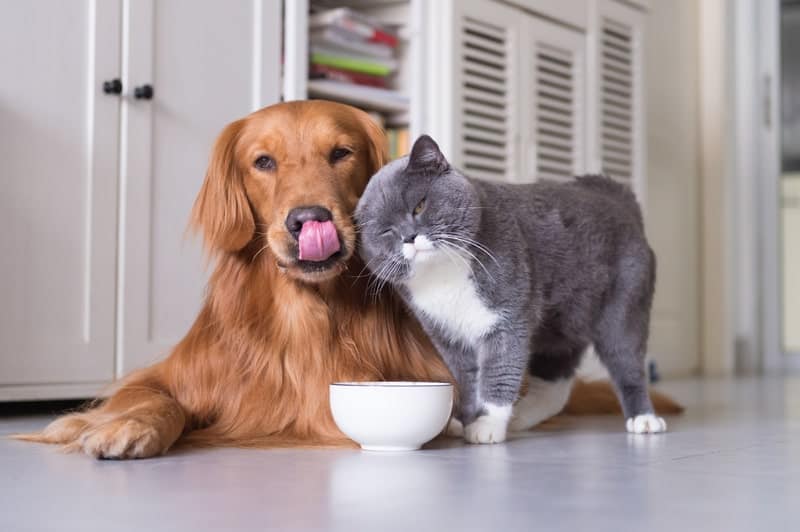 ← Previous
Are Golden Retrievers Good With Cats? - The Guide to Raising Goldens With Cats 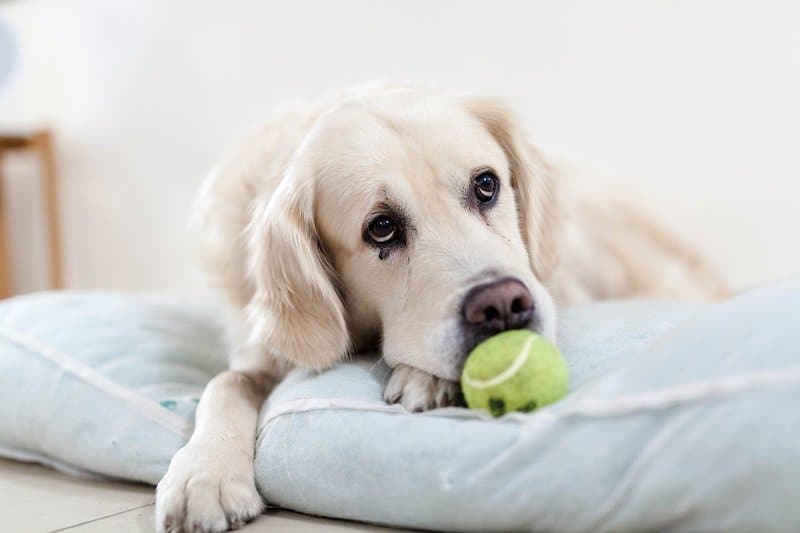