Golden Retrievers are some of the most popular family dogs. A big reason for this is because they’re also some of the friendliest dogs. But because of their sweet and friendly temperaments, owners may wonder whether they’d be great guard dogs.

Golden Retrievers are not naturally good guard dogs due to their friendly personalities and sweet yet gentle dispositions. But even so, it is possible for Golden Retrievers to be decent guard dogs with the right training. There are a few instinctual traits you will need to train out of them before trusting them with guard dog duties.

Goldens aren’t your Rottweilers or Doberman Pinschers, but they still have the potential to guard you and your home. Read on to learn about what makes an ideal guard dog and why Golden Retrievers can be good choices with training and patience.

Guard dogs are meant to scare away strangers and alert their owners when unwelcomed characters are approaching, or any other form of danger is imminent. For this canine job, these dogs should possess certain qualities.

Here is your quick list of qualities that make ideal guard dogs:

The rest of this article will explore whether the Golden Retriever possesses any of these qualities to qualify as a good guard dog.

You’ll need to remember that Golden Retrievers weren’t built for guarding. Instead, Goldens were bred for hunting and retrieving. As such, they’ll need to develop into guard dogs by supplementing any missing qualities with training.

There is no doubt that there are dog owners that buy Golden Retrievers intending to have them multitask as pet-companions and guard dogs.

So, what qualities of the Golden Retriever do such owners invest in? Check out these six Golden traits that qualify them as potentially good guard dogs.

The Golden is a medium-sized dog

Despite popular belief, Golden Retrievers aren’t particularly big dogs. If you are looking for the Golden Retriever on the list of the largest dog breeds, you should brace yourself for some disappointment.

However, they aren’t small, either. You’ll be equally disappointed if you search for these dogs on the list of the smallest dog breeds – among Affenpinschers and the Chihuahuas.

Compared to the largest listed dog, the Great Dane, which can stand as tall as 32 inches for the male and 30 inches for the female, the Golden Retriever falls short by 6 to 8.5 inches. But don’t let that get you down.

Being a medium-sized dog is good enough to fit the size requirement for a guard dog. In fact, the Golden Retriever is roughly the same size of a Rottweiler! And, Rotties are some of the best guardians.

While every dog is expected to be loyal to its owner, the Golden Retriever qualifies uniquely because of its capacity to create a strong and warm bond with its owner. In other words, these dogs are all about loyalty.

Once this bond is established with your Golden, you will not need to worry about betrayal. Goldens will stick with you through thick and thin, which is an excellent trait for a guard dog to have.

And according to Rover, the Golden Retriever is listed among the most loyal dogs based on history and the dog’s temperament. Loyal dogs naturally provide protection and security to their owners. They’ll always have your back.

Even though Goldens aren’t excessive barkers, they will spontaneously bark when they sense danger. They will also growl around their owner to warn them of looming danger.

Be attentive to the signs because growling can communicate more than danger. It might be a call for attention or an expression of pain. But, when growling is a signal for danger, your Golden is going to be extremely persistent.

Also, Goldens will impulsively jump between their owner and the source of danger. You might have read the moving stories of Goldens who have saved the life of their master by jumping right in front and creating a barrier between the owner and the danger.

See the exemplary courage of a Golden named ‘Angel’ who takes on a cougar and protects his 11-year old owner. Angel isn’t the only example of these brave retrievers protecting their owners. They’re everywhere!

Known to be people-pleasers, Golden Retrievers are exceptionally obedient, which makes them perfect for training to be all types of service dogs, including a guard dog.

Did you know, owing to their obedience, that Golden Retrievers were the first three dogs to achieve the American Kennel Club Obedience Champion Title? This is no coincidence.

The first among these 3 was Moreland’s Golden Tonka, a female Golden who won the title on July 23, 1977, scoring more than the required 100 points. Tonka set the standard high for the rest to follow.

In canine history, Golden Retrievers have been consistently recorded as the best breeds in the agility and obedience rings. No other breed has more obedience championships.

As a matter of fact, from 2010 to 2019, Goldens won AKC’s obedience championship 6 out of 10 times! If a Golden Retriever didn’t win first, they were probably 2nd place.

Originally bred by Scottish elites for small game retrieval, Golden Retrievers are active, high-energy dogs that won’t hesitate to protect you from an attacker.

Premiere guard dogs need high energy in order to become effective at their jobs. If your dog is always lounging around on the couch with you, how do you expect the dog to catch an intruder?

That being said, Golden Retrievers require at least an hour of daily exercise to be both mentally and physically stimulated. Fortunately, tracking a thief may make up part of the Golden’s daily dose of exercise.

Given the exercise needs and the purpose they were bred for, there’s little surprise that they’re listed on AKC’s list of 15 most active dog breeds. As such, our favorite activities for these dogs are fetch (catch) and swimming.

Intelligent dogs are easy to train. And, there’s no doubt Golden Retrievers are smart. They will understand new commands with fewer than five repetitions. In addition, Goldens obey known commands the first time they are made – 95% or better of the time.

In this dog intelligence bracket, the Golden Retriever ranks 4th behind only the Border Collie, the Poodle, and the German Shepherd. That’s some great company to be with!

Because of their high adaptive intelligence, Golden Retrievers are capable of learning for themselves through past experiences. In other words, they’re excellent at differentiating between a well-intended visitor and an ill-intended intruder.

You will not need to worry about your Golden becoming aggressive towards an innocent visitor. As long as they’ve had sufficient socialization early on, they will have no problems figuring out the “bad people.”

With these outstanding qualities, Goldens might seem like no-brainers for a guard dog position. However, you need to bear in mind a few other qualities of the Golden that might make you reconsider.

Why It’s Hard For Golden Retrievers to be Guard Dogs

Even the biggest Golden Retriever fan will admit that these dogs aren’t the best guard dogs compared to the options in the market. It’s not really a bad thing, but you should know these qualities if you plan to turn your Golden into a guard dog.

Certain qualities will make the Golden a perfect friend and companion. But when seen as a guard dog, the same qualities might be disqualifying for the guard-dog task.

What’s a guard dog worth if they don’t bark? Since they’re rather quiet dogs, Goldens may miss out on letting you know your house is illegally occupied by intruders.

The fact is, Golden Retrievers naturally have a “love everyone” mentality. They want to be friends with all other humans, dogs and even cats. According to The Spruce Pets, Goldens are one of the 10 friendliest dog breeds.

To fix this issue, you’ll need to train your Golden out of their natural friendliness and let them know they should bark to inform you of the arrival of people they have never seen or of animals that might be dangerous.

Goldens are naturally protective of everyone

An extreme example of an overly protective Golden would be one taking the side of a thief who is in trouble with an angry crowd. However, this is still possible with a Golden Retriever.

This is especially likely if you have trained your Golden to be compassionate, which may come very naturally to these dogs. Golden Retrievers will spontaneously offer help to anyone who seems to need it.

While teaching your Golden to be ‘humane’ is a good thing, this may work against you and others when the Golden needs to identify and catch an impostor.

We recommend you train your Golden to always refer back to you and take commands before acting in favor of a stranger. If that’s what you teach them, a simple ‘No’ will suffice to keep the Golden by your side.

These traits aren’t deal-breakers at all – you’ll just need to invest some time in training your Golden if you want them to become proper guard dogs.

Because of their high obedience, Golden Retrievers can be made a perfect guard dog through training. The following two methods can help you achieve this aim.

This method aims to teach your Golden Retriever to recognize the boundaries of its protection services.

If you keep your Golden in the house, you need to let the Golden know that outside the home is not part of its guarding job.

Here’s how you can instill this knowledge into them:

The ‘bark on command’ method

The goal of this method is to teach your Golden to bark until there is a response to the bark or the object of the bark disappears.

Follow these steps to train your dog to guard using this method:

You can adapt the two methods to your situation as long as you keep the training goal in mind.

The “Gold Standard” for Guard Dogs?

No, we wouldn’t call them the gold standard for guard dogs by any stretch. With Golden Retrievers, you may need more consistency and patience when teaching them to be capable guard dogs. Some of these duties go against their personalities and tendencies, so don’t give up too quick!

Golden Retrievers can make excellent guard dogs. They are large, protective and smart enough to guard your home and your family with minimal training at times. This is largely due to their obedient and loyal nature.

There’s no doubt their overly friendly nature and natural protectiveness (for all people) will make them less effective guard dogs than other breeds.

However, training options like the boundary method and the bark on command method can make your Golden pup a world-class guard dog in no time. You’ll never know how great your dog will be at guarding unless you try! 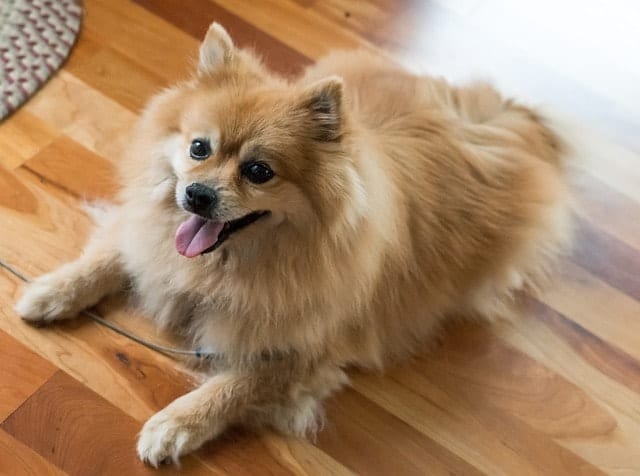 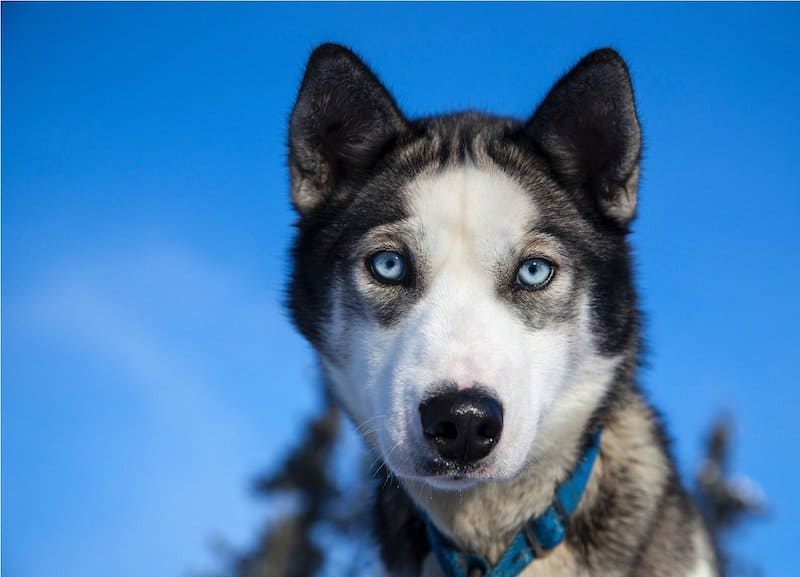 Next →
How Much Does a Husky Cost? - The 6 Factors That Determine Husky Prices
Click here to cancel reply.