What Were Boston Terriers Bred For? – History & Roles

Though they’re called “terriers” by name, the Boston Terrier isn’t your typical terrier-type dog. They have a relatively calm demeanor, though they’re lively as well. But have you ever wondered what these friendly sweet dogs were originally bred for?

Boston Terriers were originally bred for dog fighting and vermin hunting. However, they were later bred to be smaller with a calm yet mild temperament. This modification in size and temperament was meant to appeal to the elitists of Boston. Today, the vicious lineage is hardly discernible, other than their facial similarity to Boxers and lean muscular frame.

In this article, we’ll give a brief overview of these lively little dogs and take a deep look into the Boston Terrier’s development and ancestry as a fighting dog. We’ll also cover the history and transformation of these terriers. To continue, read on.

The Boston Terrier is an American Kennel Club recognized dog breed that falls into the non-sporting group. As such, they’re characterized by a small but muscular frame and a black and white coat. In fact, it’s the so-called tuxedo look that earned them the nickname of “American Gentleman.”

Well, this and his lovely and charming personality. The Boston Terriers are known for their gentle and even-tempered nature. And according to Dog Time, this breed are highly affectionate dogs that will get along with all people of the house.

Boston Terriers have an endless amount of energy and are super sweet. But they are a bit stubborn, with a very short attention span.

The short muzzle, round eyes, and coloration, either brindle, black and white or seal, betrays his roots in bulldog ancestry. However, the energetic disposition and penchant for mischief comes from other branches of this dog’s family tree.

Standing between 15-17 inches tall at the shoulder and weighing around 18 lbs on average, Boston Terriers are family favorites. After all, there’s a reason why they rank 21st on the American Kennel Club’s list of most popular breeds in America.

However, this gentleman of the canine kingdom was not always like this. Rather, their origins were a bit dark when they were first developed. Overall, they were just a completely different dog, though still having similar physical characteristics.

What Boston Terriers Were Bred For

To understand this unlikely little brawler’s origins, we have to go back to Boston, Massachusetts in the 1870s. And while there are several stories and theories about this breed’s true origins, all experts and historians seem to agree they center around New England city.

Some believe that the Boston Terrier we know today came about by breeding the Bulldog with the now extinct English White Terrier. In fact, they were developed by the coachman of a wealthy Boston family, thus starting off as pets for the elitists.

There is little corroborating evidence of this account. Even so, this origin story is generally considered to be a coincidental half-truth. A more substantiated origin story of the Boston Terrier also takes place in Boston, but the history is somewhat dark.

Boston Terriers Were Bred as Fighters

In the early 1870s, a man named Robert C. Hooper purchased a dog from Edward Burnett, a Rep for the 6th state in the Union. The dog was named “Judge.” He was of mixed bull and terrier stock and is acknowledged by the American Kennel Club as the progenitor of all true Boston Terriers.

Some stories say that Hooper bought Judge because he reminded him of another dog that he had as a child. However, this could be some imaginative interpolation. Others suggest that there was no real motive other than he wanted a new dog.

Judge, weighing 32lbs, was bred with Burnett’s dogs named Gyp. His dog was a Bulldog-type dog that was short, stocky, and had the characteristic blocky head we associate with Boston Terriers. But, these “prototype” Bostons were far from the typical example of the breed today.

Originally weighing up to 44 lbs, these dogs were known as Old Boston Bulldogs. And although there are precious few historical accounts, it can be assumed that these dogs participated in the combat for which they were bred.

In addition, old Boston Terriers had a more muscular and bigger frame, which was needed to take out other dogs in the ring. These terriers of the past also had a more aggressive temperament. As such, they were great competitors when pit against another dog.

In the same era as the dog-fighting Boston Terriers, this dog breed was once bred to hunt vermin. In fact, they specialized in taking out all types of vermin that plagued the early garment factories situated in New England of the 1800s.

The working conditions of garment factories during the Industrial Revolution were terrible. That is, a lot of people needed to fit into an enclosed warehouse-like structure. There was little cleaning inside the factories, which is how rats roamed free.

Rats were a problem in all types of factories. However in garment factories, they would often chew up the garments. As such, the only solution at the time was to breed dogs with high prey-drive to find and kill these pesty vermin.

This was another great use case for the old Boston Terrier. Like with most terriers, these dogs had a feisty nature and viciousness to them. It’s also why they made great dog fighters. Combined with a quick stride and good strength, and this terrier was bad news for rats.

While ratting is a “sport,” Boston Terriers are classified as part of the non-sporting group according to the AKC. This is because they’re not the same dogs with high prey drive anymore. Their demeanor and temperament are completely different from Boston Terriers of the past.

Throughout a handful of years, the breed was selectively bred for a smaller size. In fact, people tend to believe that they were bred with French Bulldogs to achieve this feature. Plus, the crossing is likely how Boston Terriers got the flat face that typifies the breed.

Consequently, this ongoing breeding phased out the breed’s usefulness as a fighting dog. In addition, dog fighting as a whole was dying down too, as regulations came into effect. This began the transition into the modern Boston Terrier that we know today.

Because Boston Terriers didn’t need to fight anymore, their temperaments were purposely bred to be gentle and sweet. In fact, they’re some of the sweetest and most friendly dog breeds today. After all, there’s a reason they’re called the American Gentleman.

Unfortunately, as often is the case with extreme selective breeding practices, the traits that were very desirable in Boston Terriers were a problem. Their short snout and round eyes, have caused them to develop a number of health issues as a result.

The Ancient and Brutal Pastime

In modern times, dog fighting is seen for what it is: the brutal and cruel exploitation of animals that we bred to kill or be killed. Today, dog fighting’s illegality has pushed the practice underground, relegating it to the world of gangs and criminal syndicates.

However, this wasn’t always the case. While we’ve talked about dog fighting in the 1800’s, the blood sport can be traced much further back. Dog fighting can be traced back to the Roman Empire, and slowly, it became a popular activity throughout Spain, France, and England.

The Roman Empire was the catalyst for transforming dog fighting into a widespread phenomenon.

Queen Elizabeth I herself bred mastiff-type dogs for bear-baiting. Plus, she also regularly entertained visiting dignitaries with exhibitions of this bloodsport. Eventually, all forms of dog fighting and baiting were officially outlawed in England thanks to the Cruelty to Animals Act of 1835.

Fighting dogs were bred to have strong jaws, a low slung frame, and vicious temperaments when pitted against other animals. Pit Bulls, Staffordshire Terriers, and the English Bulldog are all examples of bred dogs with fighting in mind.

In the early 1800s, the English Staffordshire Terrier was first brought to America, and the dogfighting tradition began in the USA. After the Civil War, dogfighting saw a boom in popularity and found a large audience across what was then a wild and unruly country.

The previous outlawing of such sports in England did little to dissuade this former colony from fully embracing this vicious and barbaric practice. And because of this, the original Boston Terrier was born into the world.

It was from this brutal tradition of pit fighting that the Boston Terrier was born.

So while the bloodsport was undeniably cruel and gruesome, there was some good that came out of it. Some of the world’s most popular dog breeds were once fighters, but now lovers. Most, if not all, of the popular dog fighters were eventually bred with calmer temperaments.

In America, the Boston Terrier was first shown in 1870. However by 1889, the so-called “roundhead” was a sensation among dog lovers in Boston. Sure enough, the organization of a fancier’s club with a focus on this new breed was undertaken.

That same year it was admitted to the American Kennel Club, making it the first American dog breed to receive such distinction. It is one of a relatively small number of breeds to originate in America, and it was the first non-sporting American breeds.

What Boston Terriers are Bred for Today

The modern Boston Terrier is an affectionate and playful dog that can excel in several situations. It is why they’re such adaptable dogs. While they are a non-sporting breed, these intelligent dogs are standouts in the world of performance events.

For example, Boston Terriers can hold their own in agility trials. These are exercises where they must bound through slaloms, through tunnels and over obstacles, all while following the owner’s lead. It’s a competitive sport in the canine kingdom.

This may surprise some, given their short snouts and issues breathing, but these little dogs are full of surprises. They’re sneaky athletic and more agile than you think. Boston Terriers may be calm in the home, but they’re still energetic terriers.

Boston Terriers are also fast learners, making them adapt in the obedience ring to obey commands both vocal and through body language. These activities will provide exercise, both for a Boston’s mind and body, making them happier and healthier.

Many people have also turned to Boston Terriers for therapy work. Yes, you read that right. Thanks to their intelligence and attentiveness, they make excellent therapy dogs. As long as they get the daily exercise, they can provide this next level of support for the elderly or disabled.

And of course, Boston Terriers are primarily bred as family dogs today. In 2019, the Boston Terrier was the 21st most popular dog breed in America. There’s a reason why they’re this popular among families in America!

Is a Boston Terrier Right for Me?

Given the attention they crave and the exercise they require, Boston Terriers can fit into all types of living situations. While they certainly are not suited to keep pace next to you on your morning 5-mile run, these dogs have plenty of energy.

The Boston Terrier will be just as comfortable in a family setting as in a single person home. Elderly owners also fall in love with these little dynamos and enjoy their company for many years. Kids can also be wonderful playmates for Boston Terriers.

Few Boston Terrier owners ever regret bringing one home. There’s a lot to love with this breed and they don’t really cause much problem. So while they were once bred to be fearsome fighters, Boston Terriers are now some of the best family dogs in the canine kingdom. 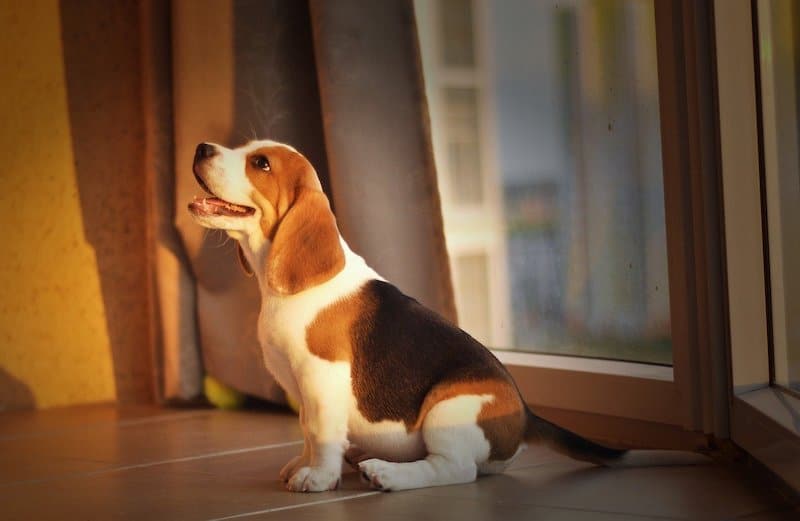 Next →
Are Corgis Good With Cats? - The Corgi Owner's Guide to Cats
Click here to cancel reply.