How Dogs Predict Earthquakes DAYS Before It Happens

Did you know that dogs, along with many other animals, can actually predict when an earthquake is coming? And while most animals predict earthquakes just seconds before the event, scientists now believe that they can sense earthquakes days or weeks before!

What’s amazing is that these dogs have become so reliable that some countries are officially using them as their early-detection strategy for predicting quakes. Interested in knowing how dogs have this supernatural ability?

Well, stick around. In article episode, we’re looking into the scientific reason why dogs are able to predict these natural disasters. And that all starts right now on The Smart Canine.

RECOMMENDED: 10 Incredible Things Dogs Can Do

When We Realized Dogs Can Predict Earthquakes

Let’s go back to the year 1989 in San Francisco, California. America was in the midst of one of the most promising World Series matchups, which included two cross-town rivals: the Oakland Athletics and the San Francisco Giants.

However, just moments before the start of pivotal Game 3, the world saw a flurry of panic, as the now-infamous 6.9 earthquake struck San Francisco on live television.

The scenery being broadcasted was short, but shocking in its brief moment. Baseball fans were being thrown from their seats, debris was falling, screaming ensuing, and in the end, 63 people had perished in the deadly earthquake of 1989.

But…the strangest thing happened prior to the disaster.

Of course, this had scientists and researchers completely baffled. Was this just one big coincidence? Or did our dogs actually predict the San Francisco earthquake of 1989?

The thing was, this wasn’t the only time dogs were reported to exhibit strange behaviors before a big earthquake. For example, a study was launched after the great 9.0 Japanese earthquake in 2011, which infamously resulted in the Fukushima nuclear disaster.

Unusual animal behaviors are important phenomena. These UABs could be useful for predicting earthquakes, although their reliability has remained uncertain yet.

Japanese researchers surveyed pet owners in the study around the area. In the results, 236 out of 1,259 local dog owners reported strange behaviors in their pets. And while the number isn’t an overwhelming majority, it’s still enough to rule out purely coincidence.

What’s even more interesting is that 60% of the reported strange behaviors occurred just seconds or minutes before the earthquake. Unusual behaviors, such as excessive barking, increased neediness, howling, and fleeing were all seen in these dogs.

But the earliest reference of such unusual behaviors prior to a big earthquake can be traced back to 373 B.C. in Ancient Greece.

Not only did records show that dogs acted weirdly, but also weasels, snakes, rats and other vermin left their homes several days before the destruction. Even centipedes left their home just before this quake.

And according to anecdotal evidence, even birds, fish, insects, and various reptiles showed unusual behavior anywhere from weeks to seconds before the significant quake.

Many decades ago, a similar EQ forecast was made in China. Back then, there was absolutely no research into this study, though plenty of villagers believed in this phenomenon. Stories of animals predicting quakes had been passed down several generations.

So when the vast majority of animals started to show unusual activity and behavior, many of the villagers chose to sleep outside their homes. And of course, the earthquake did eventually strike, sparring the lives on those that did sleep outside.

How Can Dogs Predict Earthquakes?

Given the fact that dogs have, time and time again, sensed earthquakes before they happened, we can likely rule out coincidence. So, how can dogs actually predict earthquakes?

Well, there’s no secret that dogs have superhuman-like abilities. One possible way dogs are detecting earthquakes is by sensing “P waves” – otherwise known as, “compressional waves.” It’s a seismic body wave that travels out from the quake’s source.

P waves shake the ground back and forth in the direction that the wave is moving. Plus, this particular wave arrives just seconds before the quake shakes the floor.

The problem is that humans don’t notice these P waves since it’s much smaller and faster. Dogs, on the other hand, may actually be sensing these P waves thanks to their hyper senses.

It would explain how most dogs tend to react unusually just seconds before the big seismic wave is felt by humans.

How Can Dogs Predict Earthquakes DAYS Before?

But even so, this still doesn’t explain how some dogs are able to sense earthquakes days or weeks before it hits. Well, according to scientists, this may be because of the dogs’ super hearing abilities.

Not only do dogs have the ability to hear from far distances, but they can also hear a much wider range of sounds when compared to us humans.

This leads scientists to believe that dogs are actually able to hear the seismic activity happening underground right before a large earthquake. So all that scraping and grinding of the tectonic plates or the rocks breaking apart below the ground can likely be heard by our dogs!

The reason why we humans aren’t able to detect this is because these sounds tend to be high-pitched, which the human’s range can’t seem to pick up.

And because this type of seismic activity happens hours to days before the quake goes off, it would definitely explain why some dogs become nervous much earlier than a few seconds prior.

In fact, a study conducted by canine psychologist and researcher, Dr. Stanley Coren, backs up this theory. In 2001, Coren was actually looking into Seasonal Affective Disorder in dogs.

In humans, this is known as “winter blues,” or depression and anxiety during colder winter months. With a lower level of sunlight, humans are believed to experience these symptoms…and Coren was researching to see if dogs were the same.

He would send out emails twice a week to 200 dog owners, asking them to rate their dogs’ anxiety and activity levels over the previous day.

But by pure luck and chance, Dr. Coren was able to capture this data on February 27, 2001 – just one day before a massive 6.8 magnitude earthquake shook the Pacific Northwest.

And according to the researcher, that particular date saw an unusual spike in activity and anxiety. On the day before the earthquake hit, 47 percent of the surveyed dogs showed significantly higher levels of activity. In addition, 49 percent of the dogs showed a significant increase in anxiety.

Keep in mind, these were sharp increases. Up until that day, Dr. Coren reported that the day-to-day averages were fairly stable. Of course, this unusual spike got him thinking. So like any other inquisitive scientist, he went back to look deeper into his data set.

Of the 200 dogs observed by Dr. Coren, 14 of them had hearing impairments. And out of those 14 dogs, only one of them showed an increase in anxiety, thus further supporting the idea that dogs were hearing something before the quake.

Of course, floppy ears cover the dogs’ eardrums, thus diminishing sound to a certain degree. And finally, Dr. Coren investigated the idea that the dogs were indeed hearing the higher-pitch activity happening underground.

He did this by grouping his canine subjects according to head size. Dogs with smaller heads tend to hear higher frequencies better than dogs with larger heads. So with this in mind, those with smaller heads should have been better at sensing the high frequency seismic activities.

As it turns out, the dogs with the smallest head size did actually show a far greater increase in both activity and anxiety levels the day before the earthquake! This just further solidifies the theory that dogs hear these sounds happening below them!

Other Studies and Theories

However, the theories don’t stop there.

Some Japanese scientists that studied the historic Fukushima earthquake concluded that dogs can detect changes in atmospheric pressure, changes in gravity, vibrations of micro cracks of the tectonic plates, ground-water level changes and even the production of gases and other chemical substances.

So perhaps it’s not just a single thing dogs are sensing before a major earthquake. Rather, it’s the combination of many little changes that bring them anxiety. And if you know these animals, dogs are creatures of habit.

If something is off or unusual about their routine and environment, it can certainly bring a lot of stress to them!

Is My Dog Predicting a Quake Now?

So you may be thinking to yourself, “My dog is barking, howling, acting all restless and unusual! Should I be getting ready to take cover?”

Well, not exactly. You see, there are many other reasons why your dog may be acting like this. It’s not always because an earthquake is coming.

It could just be your dog responding to something unusual he heard, or even an underlying health problem that needs to be checked on. What is important, however, is that you prepare for the safety of you and your family, including your dog.

Here are some tips to keep in mind. First, don’t try to hold onto your dog when the ground starts to shake. Their instincts will kick in and they’ll look for safe places themselves.

Dogs tend to have special hiding spots when they’re frightened. If possible, become familiar with where they hide. Have some of their favorite treats on hand to help them come over when the worst is over.

Also, make sure your dog has a collar, tag or even a microchip ID. This way, if they flee the house, they’ll safely be returned home. Stocking up on dry food and bottled water is essential. But don’t forget to stock up on food for your dog too!

If your dog requires a certain medication, make sure to have an extra supply on hand. And most importantly, stay calm. Dogs can easily sense when their owners are panicking and scared. If you remain calm, it will likely calm down your dog as well!

So….has your dog ever acted unusual before an earthquake? Do you have any great tips to prepare for a quake with your dog? Let us know in the comments section below! 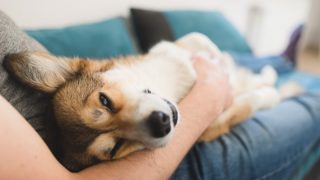 ← Previous
Do Corgis Like to Cuddle? - How to Cuddle With Your Corgi 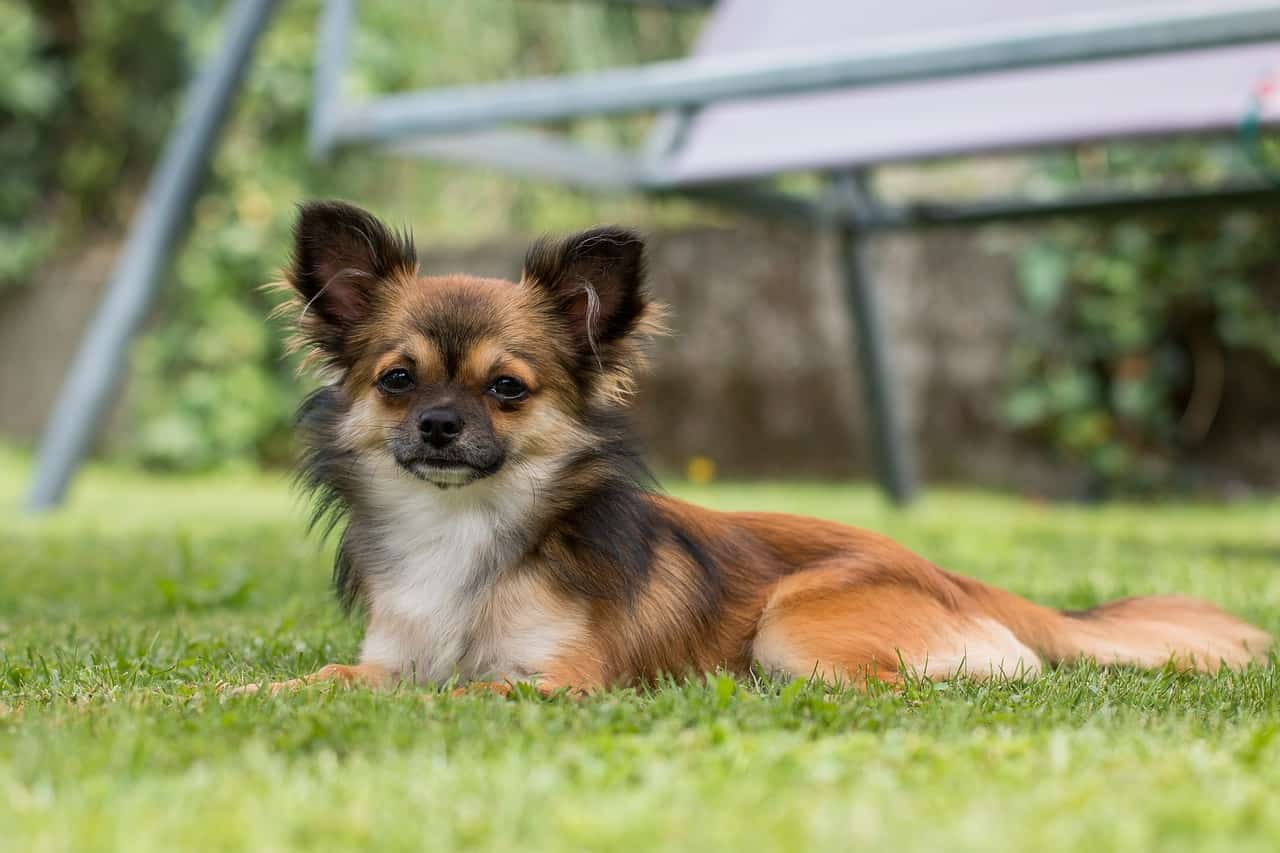 Next →
5 Majestic Mexican Dog Breeds - The Guide to All Dogs of Mexico
Click here to cancel reply.