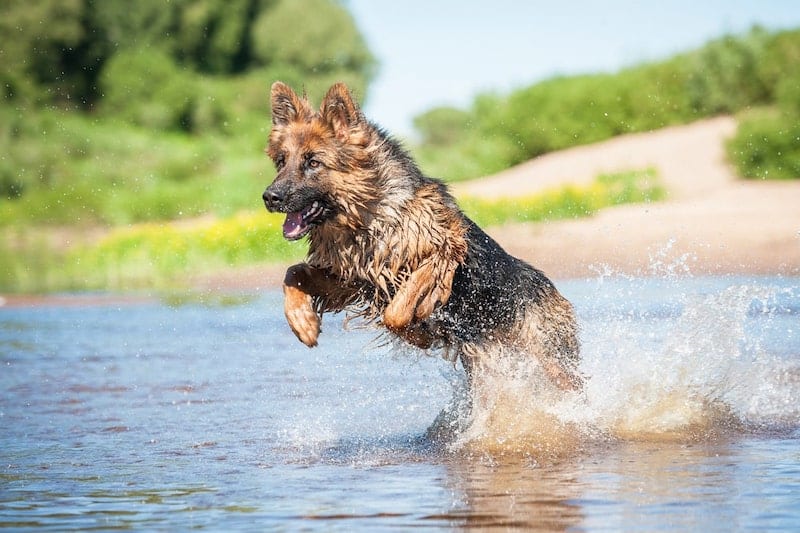 German shepherds are a breed known for their athletic abilities. After all, they’re the top choice for the K9 police force. But just because they’re athletic doesn’t necessarily mean they’re natural at moving through water.

So, can German shepherds swim? Generally, yes, German shepherds can swim. Though they were not specifically bred for dealing with water, this breed usually can swim excellently. Their natural energy and agility gives them an edge when off land. Still, sometimes this breed won’t like water and may even seem afraid of it.

But not all German shepherds are equally good swimmers. In addition, there are a few things that all owners need to know before taking a German shepherd out to a pool or a lake.

It isn’t hard to picture a German shepherd swimming. Few canines can compare to their sheer athletic ability or physical prowess of the GSD. However, this doesn’t automatically mean they can swim or that they’ll be great at it.

So what needs to happen for a German shepherd to swim safely? First, we should always start with the assumption that your German shepherd cannot swim. Just because your neighbor’s GSD is an excellent swimmer doesn’t mean yours will be.

It is important never to put them in any large body of water until they have shown they know how to swim. Or at least until you teach them.

However, you can rest assured that the odds are your German shepherd has the potential to swim. As long as they do not have any major muscle or skeletal health concerns, that is.

Like most dogs, German shepherds should instinctively know how to swim. Which is fortunate, since we cannot communicate techniques to them otherwise. Still, there are some steps to take to ensure the learning experience goes smoothly.

How to Teach a German Shepherd to Swim

Learning to swim in a safe environment is the top priority for both humans and canines. I mean – we don’t simply toss children into pools and hope for the best (at least, we certainly hope we don’t!).

Helping your dog learn to swim is an important part of their life. If done wrong, they could end up with a fear of water. If done right, they might come to love splashing around.

Below are some AKC swimming tips to ensure your German shepherd’s first experiences with water are safe and enjoyable.

There is no “perfect guide” to teach your GSD how to swim. It really depends on your dog. Some will naturally jump in and start paddling away, whereas others will be afraid. Just remember that this may take time, and that you should never force them.

Though many dogs absolutely love water, there are plenty that are afraid of it. German shepherds aren’t known for being overly timid, but there is a chance yours might not like water.

Or they could even be afraid of it. However, a German shepherd’s naturally courageous demeanor means it is less likely to fear water. If they can take down an armed robber, they’ll likely overcome a fear of water.

However, German shepherds were bred for herding and various work on land. Unlike the Poodle, the GSD doesn’t have a natural affinity towards water. Though, this can quickly change when they realize how fun swimming can be!

As we mentioned in the previous section, treats can be crucial to giving your dog a positive experience with water. Encouraging and rewarding your German shepherd when interacting with water will boost their attitude toward it.

Also, being mindful while bathing your dog is essential. If your dog has an experience where water goes over their heads and makes breathing difficult, they might begin to fear water in general.

Some tips to follow at bath time to ensure no fears (of water) develop include:

If you can help your German shepherd associate water with fun (or at least, not dangerous), you will have a better shot at swimming with your dog.

German Shepherds Were Built for the Water?

Even though German shepherds weren’t bred specifically for swimming, they have several traits that make them naturally powerful swimmers.

Compared to many other dogs, such as the Pug or Frenchie, German shepherds will have a huge physical advantage in water. So while they’re not technically built for water, they still possess all the traits that’ll help them thrive while swimming.

When Should I Not Let My German Shepherd Swim?

However, swimming under the right conditions could be helpful for building up strength. Hydrotherapy for dogs can be a useful means of physical therapy. Still, we advise always following the suggestions and expertise of your local vet.

Sometimes your GSD just hates water, and that’s okay. If your dog is deathly afraid of getting in the water and won’t budge, it’s probably a good idea to let it be.

What Temperature Is Safe for a German Shepherd to Swim In?

With their thick double coat, a German shepherd certainly has more natural insulation than we do. Still, that doesn’t mean they can swim in any body of water.

German shepherds have a high cold tolerance, and usually can even handle temperatures around 20 degrees Fahrenheit. But temperatures that low will freeze water.

And in cold weather, you should ensure that your German shepherd stays dry. A good rule of thumb is to think: if I were outside in wet clothes, would I be quite cold?

If the answer is yes, then the weather is likely too cold for letting your German shepherd go out for a swim. You’ll need to be responsible and make this decision for your dog.

Though dogs are quite good at drying themselves off with shaking, having a towel on hand could help keep your canine friend comfortable.

One of the benefits of a swimming pool is it allows you complete supervision over your dog. However, there is a downside as well. If your pool is chlorinated, it can strip your dog’s coat of its natural oils and lead to dry, irritated skin.

But there are ways to pool-proof your dog’s coat so they can enjoy a relaxing swim. Which a German shepherd would certainly appreciate in the summer.

Tips to pool-proof your German shepherd include:

Can German Shepherds Swim in the Ocean?

Lakes and ponds rarely pose any dangers, unless they are massive lakes. The ocean, though, can be a different matter because of the salt and the unpredictability.

A German shepherd might be able to swim in the ocean, but we strongly advise against it. Not only are the waves dangerous, but spending too much time in ocean water can lead to potential salt poisoning for your dog.

Playing fetch with your German shepherd along the shore should be fine. Just make sure that they know they shouldn’t drink any water from the ocean.

Their instincts should take care of that, but just in case we recommend you bring water to keep your canines hydrated. And if they start drinking salt water, immediately step in and correct the behavior.

Do you have any tips or tricks that seemed to work well? If so, we’d love to hear about them.