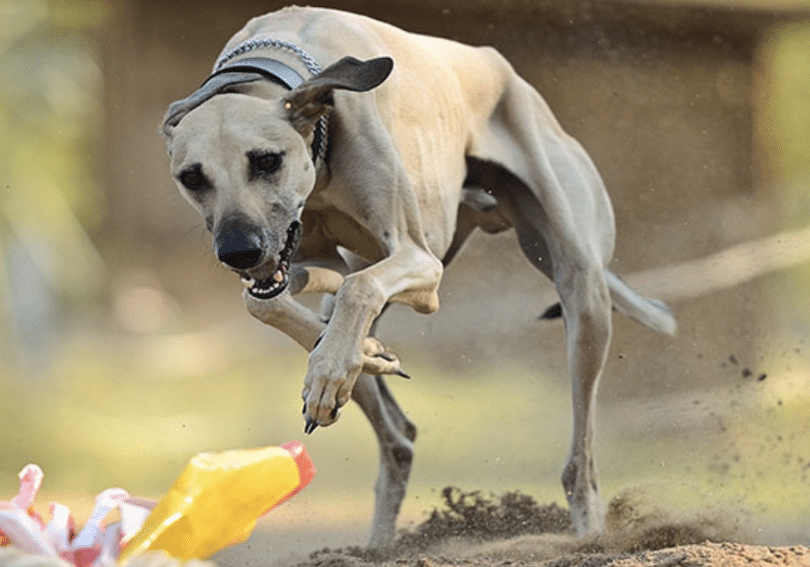 The Rampur Greyhound gets its name from the area of northern India they were bred in, Rampur. Like many hunting dogs in India, Rampurs are sighthounds. Many people easily confuse them with greyhounds but to the practiced eye, there are significant differences. A cross between the English Greyhound and the Afghan Hound (Tazi), they are a wonderful combination.

The Muslim rulers of India for hundreds of years, known as the Maharajas, bred the Rampur Greyhound primarily to hunt and kill jackals. However, they were also used for hunting lions, leopards, and tigers. The best of them could single-handedly take down a golden jackal.

They are a tough breed; loyal, strong, able to run at high speeds for enormous lengths of time. Full of energy, they need a lot of attention but not much care as they are self-contained and independent. A Rampur is a great companion and will love being around humans. Their gentleness with children is a particular delight. Although they bond very closely with one person, if they are raised in a family, they will be protective and affectionate to everyone they know well.

Friendliness: The Rampur dogs are very friendly towards its family and their friends. They may be aloof around strangers at first, but once they gain their trust, they’ll treat them as family. Rampurs can have problems with other small dogs due to their hunting instincts, so early socialization is crucial to make things work.

Trainability: As intelligent as they are, the Rampur Greyhounds are not the easiest to train. They must be trained by their masters after having built rapport and gained trust. If you plan to have a professional come in and train them, you might as well throw away your money.

Grooming: They don’t require extensive grooming. Like with most sighthounds, just basic grooming is needed. This means the occasional coat brushing, tooth brushing, baths and nail clipping. There is no need going to a professional for this stuff, as they keep themselves pretty clean most of the time.

Adaptability: These dogs cannot live in an urban setting because of the amount of energy they need to expend on a daily basis. They also don’t like to be left alone for long periods of time because they are such extroverted dogs. If you can’t provide plenty of exercise, a spacious environment and playtime, don’t expect the Rampur to adapt to such living standards.

Activity: They are fierce hunting dogs, so its no surprise that they need a lot of exercise, daily. A routine walk accompanied by a large backyard is necessary for these dogs. If you live in an apartment and have to work long hours, I would definitely not recommend the Rampur Greyhound. 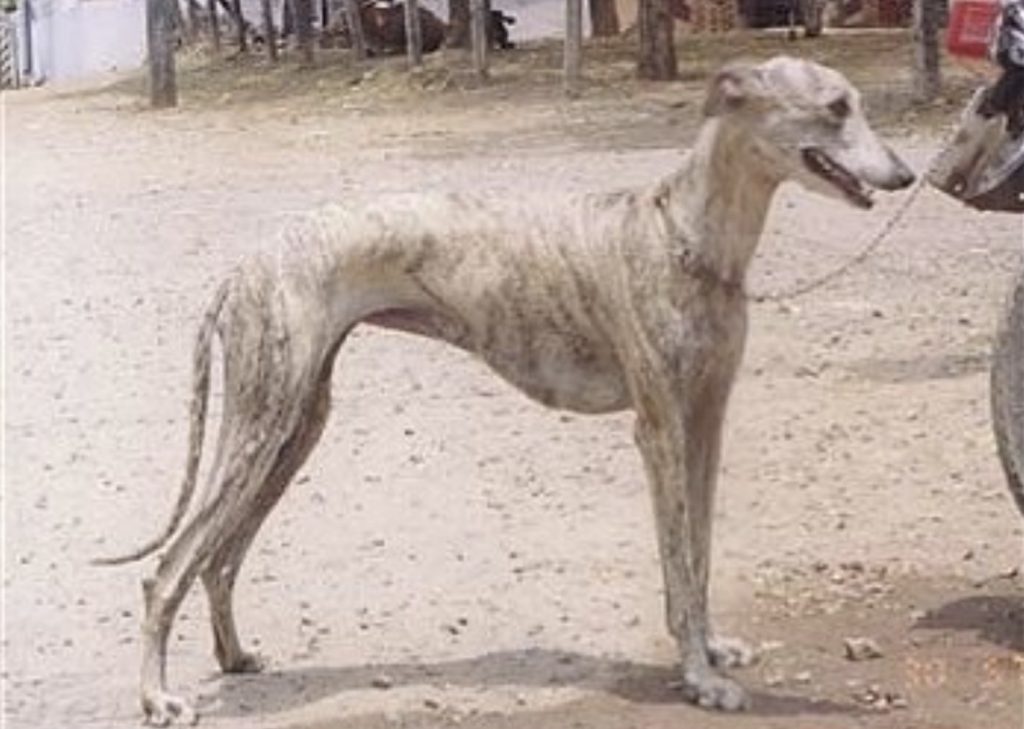 From the base of the neck to the base of the tail they measure in around 36 inches. A long, slightly upwards-tapering tail is about 2/3 the length of the body. Unlike English Greyhounds, the Rampur Greyhound has a muscular and long neck. The jaws of the dog are powerful and are roughly 9 inches long. A Rampur weighs in about 60 pounds and can measure up to 30 inches in height.

The Rampur is distinguishable by its muscular yet lithe frame, which can run terrifically fast and put in enough power to take down large animals. Their feet are “hare-like,” with webbed toes that are very flexible and articulated. Flexible toes give the Rampur an excellent sense of balance and contributes to their powerful grace.

Colours of Rampurs vary from black to light grey. Commonly, they have dark markings that help them blend in with the forest vegetation. Their eyes are yellow to golden in color and the placing of their eyes gives them 270 degree vision – like with the Chippiparai Dog. 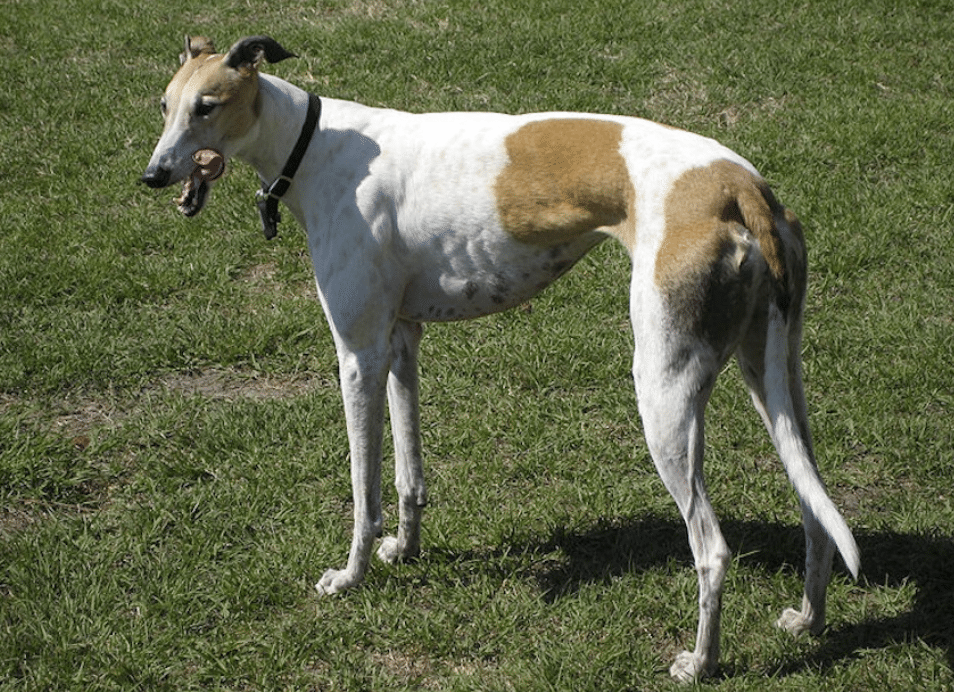 Rampurs are happiest with people around. Affectionate and very willing to show it, they make excellent companions to a single master or a family group. Their enthusiasm can get the most of them, and they have been known to knock people over in their eagerness to say hello. Gentle and sensitive with children, they do not like to be surprised but are very rarely aggressive with humans. That said, they are fantastic guard dogs because of their larger size and protective instincts. In fact, many believe that they’d make top tier police or military dogs.

Hundreds of years of breeding have made the Rampur a highly energetic breed. With that said, they needs daily exercise and a lot of personal space. A large yard is basically a must because of their need to get out and stretch their legs.

Generally, Rampurs are one-owner dogs. They work best when they have one person to take command from. However, they live well with families and groups.

Some people say that Rampur Greyhounds are lazy, but they are smart enough to know they can relax. Sometimes they can surprise you, going from chilled out to full-on in a very short time. This is part of their appeal and is something owners accept.

With Children, Strangers and Other Pets

Children get on well with Rampurs, who are openly affectionate and great fun to play with. Very little children might get bowled over by the bigger dog and its enthusiastic ways, but it is never deliberate or malicious. As companions, they are perfect for young children. Both affectionate and protective, they are the right blend of loyalty for kids who need a good friend that’s always there for them.

Although they will get along excellent with people they are familiar with, they can be reserved and withdrawn when surrounded by strangers. Given a little time, they can get to know and love you. Be careful if you do not know the dog. They can perceive your actions as aggressive towards their masters, which probably won’t end well. They are known to attack intruders and aggressive people, so keep that in mind.

Small dogs are a risk with Rampurs, like all sighthounds. Toy breeds look edible to a Rampur, who will chase and kill them given the chance. To prevent such a thing, socialization with your small pet is necessary very early on. If they grow up with a non-aggressive dog, then they will be just fine.

They’re usually very clean and tidy, meaning they require very little care and attention for their appearance. You will never need to take them to be professionally groomed and they only occasionally need a brush. Of course, their teeth need cleaning and their nails clipping. 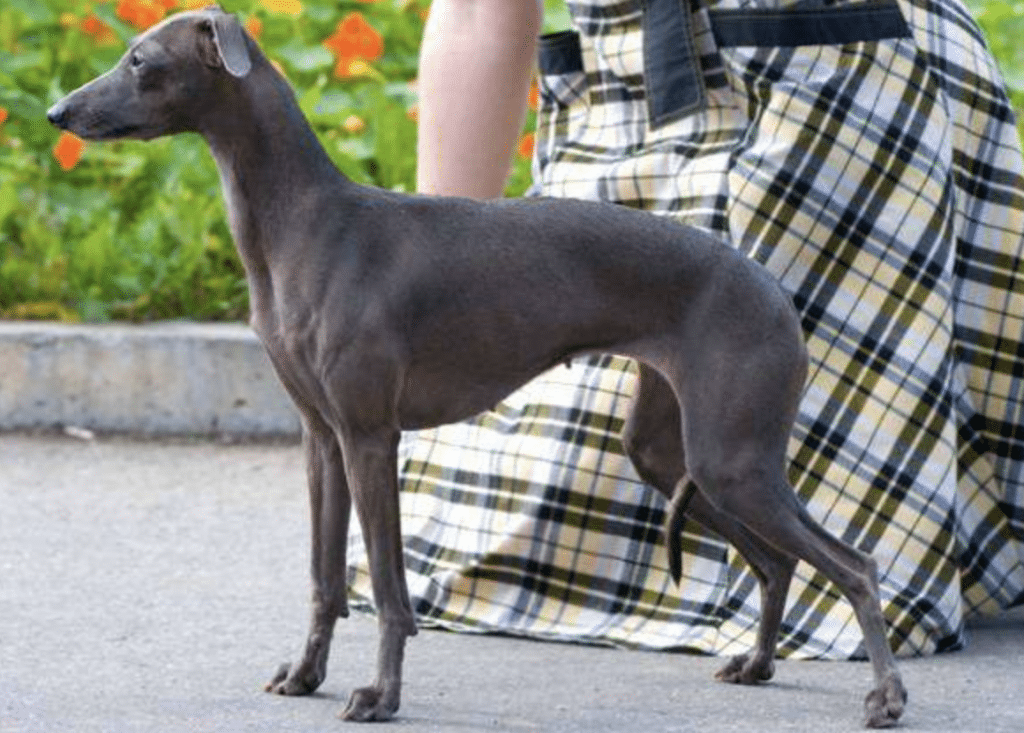 Rampur Greyhounds are highly intelligent dogs and quick to learn. Training and housebreaking a Rampur is relatively straightforward. However, their intelligence makes them stubborn and aloof, and they have to trust you before they will take commands from you. As they like to pair-bond with a human, if the master is the one to train them, good results are usually achieved. Some people falsely accuse these dogs as being dumb when it comes to training. But in reality, the Rampur just doesn’t want to obey those it doesn’t respect.

Even with the best training, your Rampur is still a hunting dog, they cannot be let off the leash or they will bound off and hunt small animals. Although obedience training can help, its best not to fight their natural hunting instincts.

Like most Indian sighthounds, Rampurs are a healthy and long-lived breed. Some live up to 15 years and usually in good health. Because of their diverse heritage, they have few if any inherited diseases, although some can develop esophageal achalasia and bloat. They are thin animals and need a soft bed to sleep on. Sometimes they don’t get enough vitamin A, so a diet rich in the essential vitamins will help. 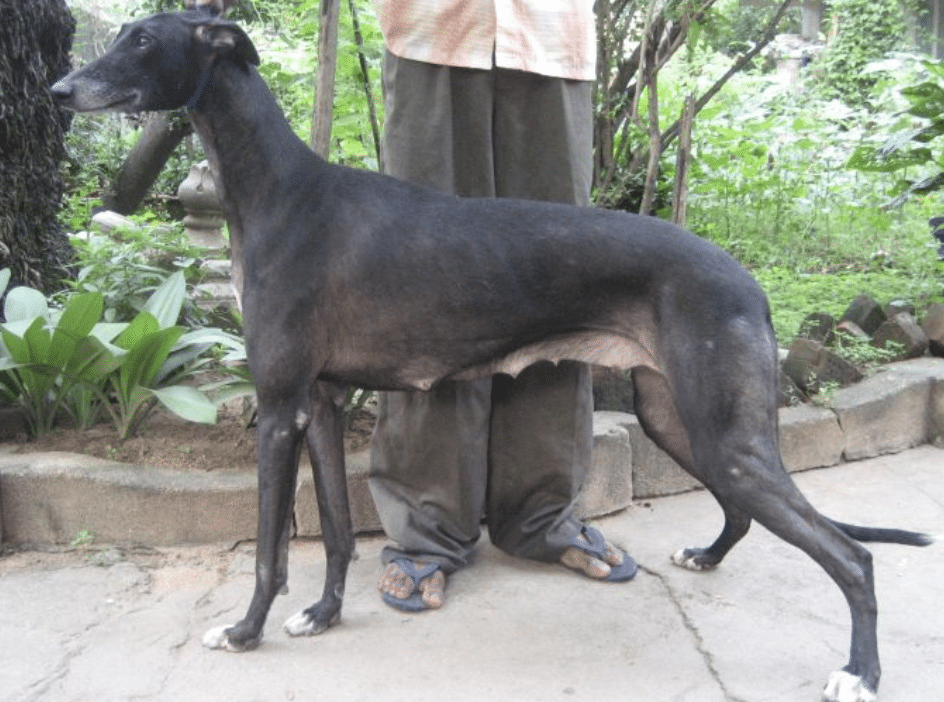 The Nawab of Rampur, Ahmad Ali Khan of Rampur, created the line by crossing Tazi (Afghan hounds) with the English Greyhound brought over by the British occupiers of India. A combination of rugged looks and tough character from the Tazi and the speed of a Greyhound, the breed was an immediate favorite. Their popularity has fallen since the fall of the Maharajas, with more Greyhounds being bred into the line and fewer people using them for hunting. Some fear they will soon become extinct