Everything About the Pug – The Complete Guide to the Chinese Pug

Pugs offer a compact canine package wherein a small space contains multiple traits. Members of this dog breed can be sturdy, comical, intelligent and sensitive all at the same time.

Add dignity to the list, and what you have is a complete Pug. This dog breed displays multiple and contrasting characteristics, thus presenting an enigma. Owners may start off feeling confused, but soon grow to love this dog due to these very reasons.

Latin phrase “multum in parvo” best explains a pug, because it means “a lot in a little.” A Pug’s face reminds you of a clenched human fist – at least that’s how some people describe them.

However, they bear beauty spots and plenty of wrinkles, which at one point were interpreted as being ‘princely’ by the Chinese. In a nutshell: the pug looks comical, loves playing, craves attention and makes the most steadfast companion.

Friendliness: Pugs are some of the friendliest dog breeds in the world. With proper and early socialization, they get along with humans, dogs, cats and other small animals. But don’t mistake their friendliness for weakness. They are vigilant dogs and will alert you strangers arrive.

Trainability: Pugs are a little stubborn and require a little more time with training. The important thing to take note of is persistence. According to owners, the most difficult part of training is housebreaking. They’ll find unusual ways to express that they need to do their business.

Grooming: Unfortunately, Pugs do shed and will require coat brushing to keep their fur in check. Along with tooth brushing, nail trimming and bathing, you will need to help them maintain clean ears and wrinkles. These are the places most likely to get infected with these dogs.

Adaptability: Pugs don’t adapt too well to extreme climates. If it’s too cold or too hot, your dog will suffer. Plus, they get hot fairly quickly. Too much exercise on a sunny day may be stressful for your Pug. However, they will be fine in an apartment or in a large home.

Activity: These dogs sometimes prefer to be lazy with their owners. If you’re looking for a chill lap dog that’ll lounge around with you on a lazy day, this dog is for you. Still, they need minimal exercise like with any dog. A nice stroll through the neighborhood will be sufficient for a Pug.

The History of the Pug 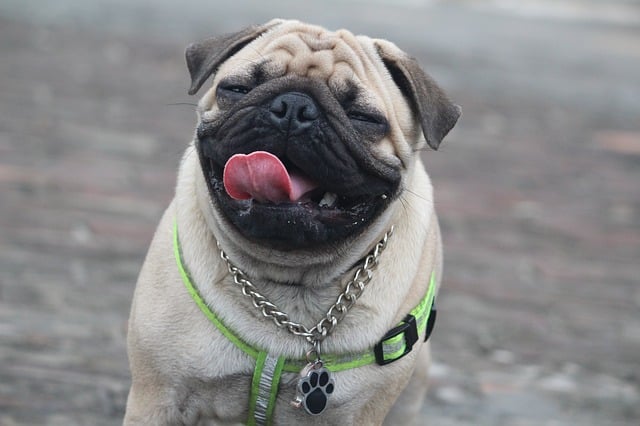 The Pug’s origin can be traced back to 206 BC when the Han dynasty ruled China. They enjoyed royal patronage and remained exclusive to the imperial circles through several centuries.

Their regal owners regarded them as being small-sized cousins of the Tibetan Mastiffs and highly valued their companionship. Pugs in the ancient era were popularly referred to as ‘Foo Dogs’ in Tibet, China and Japan.

Pugs in the West

During the 16th century, China began trading with European countries and the Pug crossed the high seas for the first time. The Dutch traders christened this dog breed ‘Mophond’ and pugs soon became a regular feature in royal households across the European continent.

In 1572, the House of Orange declared the pug as the official dog to mark the courage of the dog by saving Prince William’s life. His Pug warned him of the approaching Spanish army.

When the prince travelled with his good lady to England to ascend the throne, the pugs formed a part of the coterie and soon became popular in England too.

Throughout Europe, pugs have come to be known by different names, many of which were coined during the 18th century. The French called them ‘Carlin’, the Spanish christened them ‘Doguilo’, the Germans referred to them as ‘Mops’ and the Italians as ‘Caganlino’. In Finland, people named this dog breed ‘Mopsi’ and the Chinese continue to call them ‘Lo-sze’.

Sometime during the early 1800s’ pugs came to be recognized in England. Canines either belonged to the Morrison line or to the lineage created by the Willoughby d’Eresby family.

When England invaded China in 1860, the English soldiers discovered pugs in the palace and carried them to their country. Lamb and Moss were two pure-bred Chinese pugs that laid the foundation for this breed in England.

Pugs arrived in the USA after the civil war and the AKC acknowledged their presence in 1885. Although interest in this ancient Chinese dog breed has been fluctuating through centuries, pugs continue to enjoy immense popularity the world over. 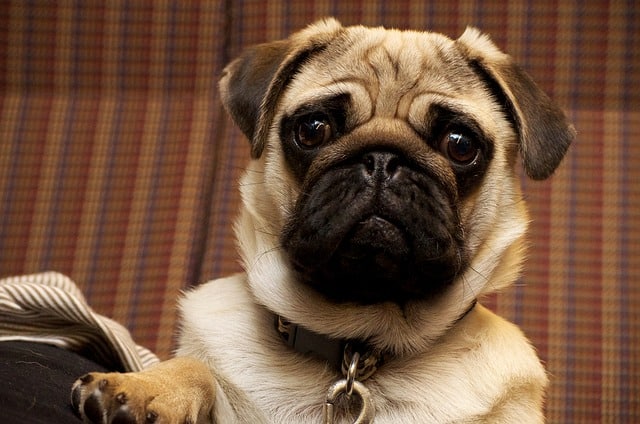 Is a pug a picture-perfect pooch? Definitely not, but this dog breed can still win your heart with its adorable ways.

Do not expect a pug to hunt other animals or track down game. That being said, they do warn their owners of a stranger’s presence if the situation calls for it.

Pugs revel as lap-dogs and love to spend time with their owners. That is why you must not leave this pooch alone for long durations. They suffer from separation anxiety and remain unhappy in solitude.

Most dog owners regard pugs as being difficult to house train. But more experienced pet owners also claim that pugs express the need to potty through their body language.

While training a pug, bear in mind their sensitive nature and avoid harsh methods. Rather be gentle and persistent and you will certainly receive a much more positive response. For best results, start early with the training rather than wait for the pup to grow up a bit.

For a pug, an ideal lifestyle features plenty of food and a comfortable couch. Given a choice, this canine could live with eating and sleeping throughout the day, even if it means transforming into a couch potato.

So, as a pet owner, you must make it a point to take them out for moderate exercise, like a short walk or some canine sports. Just make sure that the pug does not overdo his exercise, given that it cannot tolerate heat.

A pug’s temperament depends on genetics too. Evaluate the pup by meeting the parents and siblings and choose one with which you are likely to be comfortable.

Expose your pug to socialization early and you will have raised a balanced and amiable canine. Take your pug out for a walk as soon as you acquire one – no matter what the age of the canine might be.

Since this dog breed thrives on interaction, the more they meet people, children and other animals, the better their social skills get. Pugs that have been socialized from childhood usually grow fond of children and get along with other animals too.

Of course, you must ensure that the child or the other dog/animal also behaves well with the pug. Do not allow any kind of rough play so that all parties involved remain safe and enjoy the interaction.

Caring For a Pug 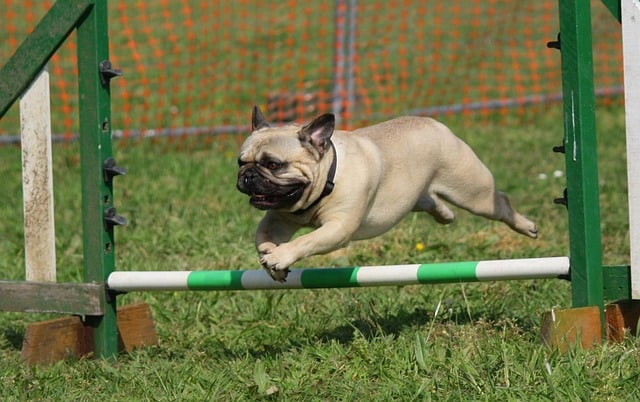 Caring for a pug does not take much effort. Set aside some time on a daily basis towards grooming and outdoor exercise and you will have nurtured a content and healthy dog companion.

While indoor, the pug believes in being with the owner, which could translate into watching television or sleeping together. So, this canine makes an ideal choice for apartment dwellers, particularly senior citizens.

Pugs become uncomfortable in extreme heat or cold, and this is something that owners need to be vigilant about. At the most, you can take the pug out for a 20-minute walk during the evening when it is neither too hot nor too cold.

Also ensure that the pug’s water bowl is always full, particularly during hot weather, so that the pooch remains sufficiently hydrated. In case you observe any symptoms of overheating or discomfort due to cold, take immediate action before the situation aggravates.

Every time a pug sleeps, snoring noises are inevitable and loud enough to keep a light sleeper awake. Just to be on the safe side, invest in pair of effective ear plugs.

If pugs love human companionship, they also love food. Whatever you serve your pug, the canine would simply polish the bowl clean no matter what the quantity.

This dog breed also loves treats and pet owners usually succumb to the pleading set of large puppy eyes. All of this causes the canine to put on weight very easily and become obese.

To maintain your pug’s weight, serve about one cup of premium quality dog food, preferably dry, twice a day. Practice strict portion control and adjust the portion size as per the weight of the canine.

Pugs tend to gain weight gradually, which means one fine day you might wake up to realize that your adorable companion is way above the healthy limit. Avoid this situation by weighing the canine regularly and noting down the readings in a book.

You can indulge your pug with an occasional treat but factor these in the calorie count. Likewise, serve your pug home-made food only after having consulted the vet, so that it is appropriate for the canine’s age, weight and physical activity.

Feed your pug appropriate portions, limit treats and encourage daily physical exercise for your canine to enjoy good health. Human foods as treats are okay as long as you do your research. 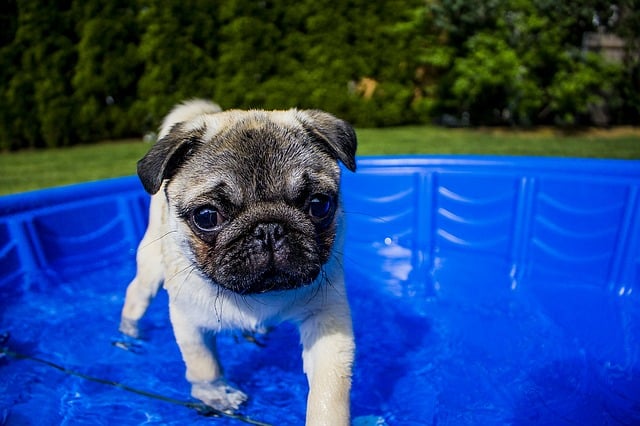 A Pug’s coat is short, smooth and double-coated, and comes in two colors, namely black and fawn. Although short-coated, Pugs shed excessively, particularly in summer. The good news is that you can get rid of the loose strands through daily brushing with a bristle brush and a glove.

You can bathe a pug once a month or even once a week, depending on his hygiene. If you feel that he needs a frequent wash, then use a mild dog shampoo, which would clean up without harming the smooth coat.

As part of grooming, pay special attention to the pug’s wrinkles. These tend to serve as breeding grounds for bacteria, and if ignored, they can quickly gather dirt and lead to infection.

You can use cotton balls or baby wipes to dry the folds, especially after a bath. Likewise, clean the pug’s eyes with a clean swab of cotton and the ears with a cotton swab dipped in hydrogen peroxide. Trim the canine’s nails every week and brush often to keep the pearly whites clean and the gums healthy.

Get your pug used to being examined and groomed from an early age, particularly the paws, eyes and ears. Be on the look-out for any kind of redness or patches on the skin and look inside the mouth for any indication of bleeding or inflammation.

Always reward your Pug with a treat after every examination and incorporate grooming as part of weekly routine. 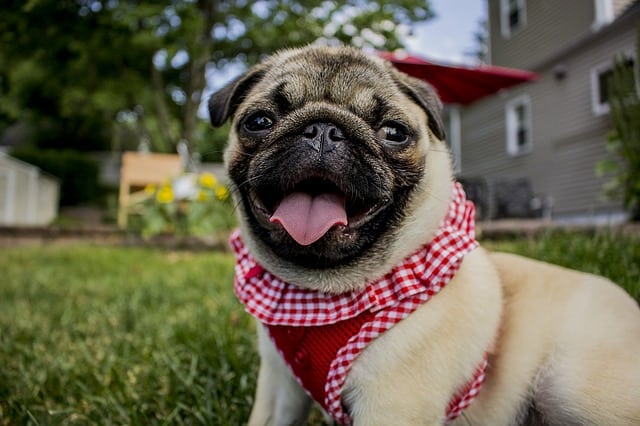 Like all dog breeds, pugs tend to contract certain health problems. Although they remain healthy for the most part, conditions that you must look out for are –

All these conditions require varying degrees of treatment depending on the seriousness and stage. Besides POE, none of these are life threatening but timely medical attention and vigilance on your part could go a long way in helping your pooch cope with the illness.

A healthy pug weighs between 14 and 18 pounds and has a height of 10-12 inches. On being well-looked after, pugs live up to 15 years and dedicate every moment of their lives to their owners.

When they are at their best, pugs are curious, playful and comical. So, as an owner, you would really have plenty of reasons to dote on them and pamper them as babies.