Pandikona Dog – The Complete Guide to the Forgotten “Indian Doberman”

Hailing from the small village of Pandikona, the eponymously titled sighthound is in real danger of becoming extinct. They are perfectly adapted to the harsh conditions of Kurnool district in India, which is dry and arid. The Pandikona is considered a “primitive” type breed, meaning they have evolved their characteristics without the input of humanity. The locals most likely spotted the dog and used its existing characteristics without much breeding.

Because of their hardiness and relative independence from humans, they are very self-reliant and need little care to keep them happy. Intensely territorial, the Pandikona dogs have been used as guard dogs for many centuries. They can guard property and livestock as well as being very effective hunters.

They’re often ill-tempered with other dogs and very willing to fight if they or their pack and territory is threatened. This territorial instinct can be seen from a young age. They are incredibly independent when left on their own, naturally taking on the guard role in their owner’s lives. However, they are very tolerant of children and with training can make excellent pets.

Friendliness: The Pandikona is a primitive Indian dog breed and have not interacted much with humans before domestication. Although they can get along well with humans (including children of the family), they are not so nice towards strangers. In addition, they often get in fights with other dogs.

Trainability: They have primitive instincts and probably won’t enjoy learning certain commands, such as “sit” or “roll over.” Their intelligence is average, but it’s best to keep these dogs have hunting or guard dogs.

Grooming: A Pandikona requires very little grooming, if any. They’ve managed to self-groom just fine in the wild for so many years. It’s still nice to give them basic dog grooming from time to time.

Adaptability: Even though there is little information regarding the Pandikona, they need a lot of space to run. Activity is crucial and they really won’t enjoy being stuck indoors all day. These dogs thrive best in the outdoors, but in warm climate. This means taking this dog to a cold climate environment would be borderline cruel.

Activity: Like I mentioned before, they need a good amount of exercise. The Pandikona is a primitive dog and can’t be fully domesticated like other dog breeds (Labrador or Golden Retriever). They need plenty of room to run around in addition to daily physical activity. 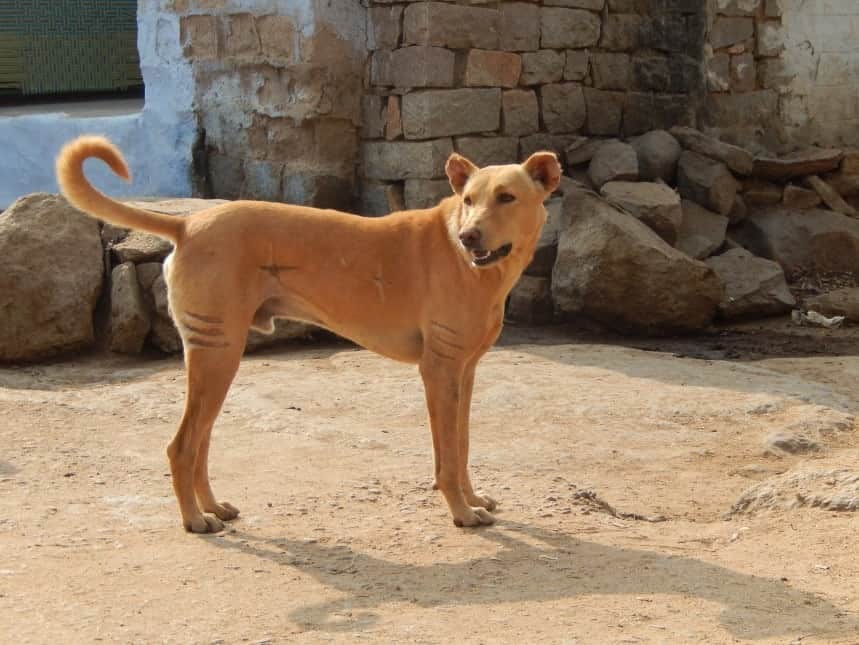 The British occupiers of India noticed these dogs physically looked similar to the Dobermans of Europe, thus calling them the Indian Doberman. With large, pointy ears that droop and a medium sized muzzle, they do look a lot like Dobermans.

Colors vary from fawn to black with white patches. However, nearly every color is found on the Pandikona. Their mixed heritage due to their roaming nature has made them quite variable in appearance. Tails can be curled over the back like a Spitz or long and slightly curved, depending on the heritage of the dog.

Males can grow up to 26 inches tall and females make 24 inches in height. Weight varies with the build of the dog but information is very limited on this. 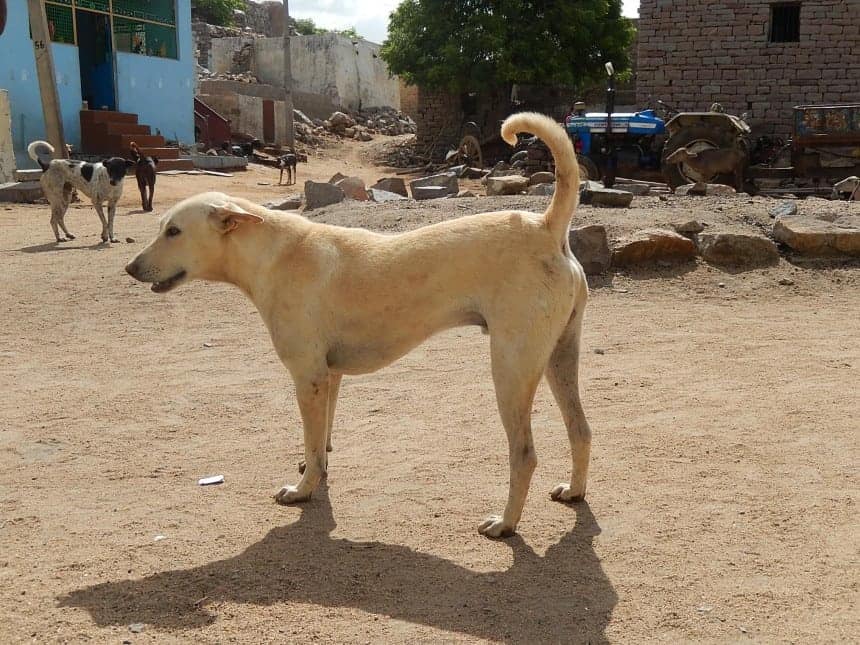 Affable and good-natured, the Pandikona make very good companions for individuals or families. They need socializing and training from a young age but their territorial instincts are impossible to eliminate. Fortunately, most owners have found these instincts to be very helpful.

These dogs are considered to have average intelligence and are trainable to those with some experience. Because they led very free lives in the past, they attach allegiance to a household but generally wander where they pleased. This makes them free spirited but loyal, an endearing quality that the lucky few who manage to get hold of one love.

As sighthounds bred to guard and hunt, they have strong prey instincts. Squabbles with other dogs are common but rarely end in real fights. However, if cornered or properly threatened, they will attack much larger animals.

With Children and Other People

Unlike some sighthounds, the Pandikona is very tolerant of young children. They are not the most playful of dogs but their fierce protective nature is perfect for kids who need a solid companion. While they can forgive the children, a Pandikona will take a threat from an adult very seriously. Pandikonas are not dogs to tease. An attack will come quickly and with only a brief warning. Because of this, they’re considered ideal for defending a village but less so for keeping your postman happy.

Pandikonas are pack animals and have no real history of taking command from humans. They will know what to do on a hunt but are less biddable unless well trained. In Pandikona and the surrounding area, they will form hierarchical packs with intelligent communication systems. It is a shame the Pandikona is so relatively unknown and threatened. They are truly fascinating dogs. 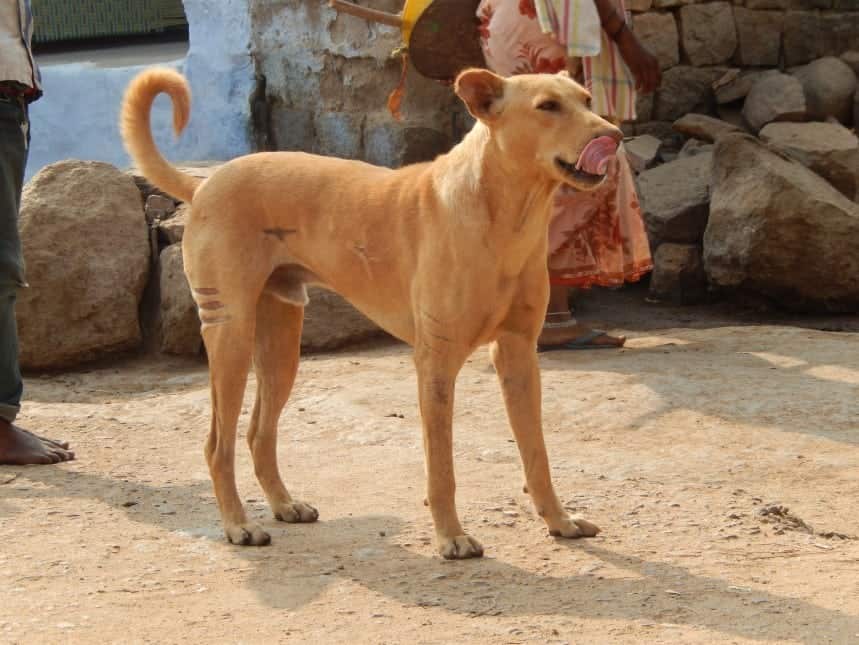 Information on how they live outside of village life is rare. However, they certainly need a big yard to run around in and daily exercise if you keep them as a pet. They have very short fur and do not need regular brushing. It is not thought that they shed regularly. Pandikonas are a very tough breed and are tolerant of harsh climatic conditions.

Although there is no breed standard and little information, the people who know Pandikonas say they are a very robust and healthy breed. Their lives outdoors have made them resistant to parasites and infections, and they seem to have few inherited diseases, if any at all.

The female will breed once a year and yield between 4 and 7 pups.

The Future of the Pandikona Breed 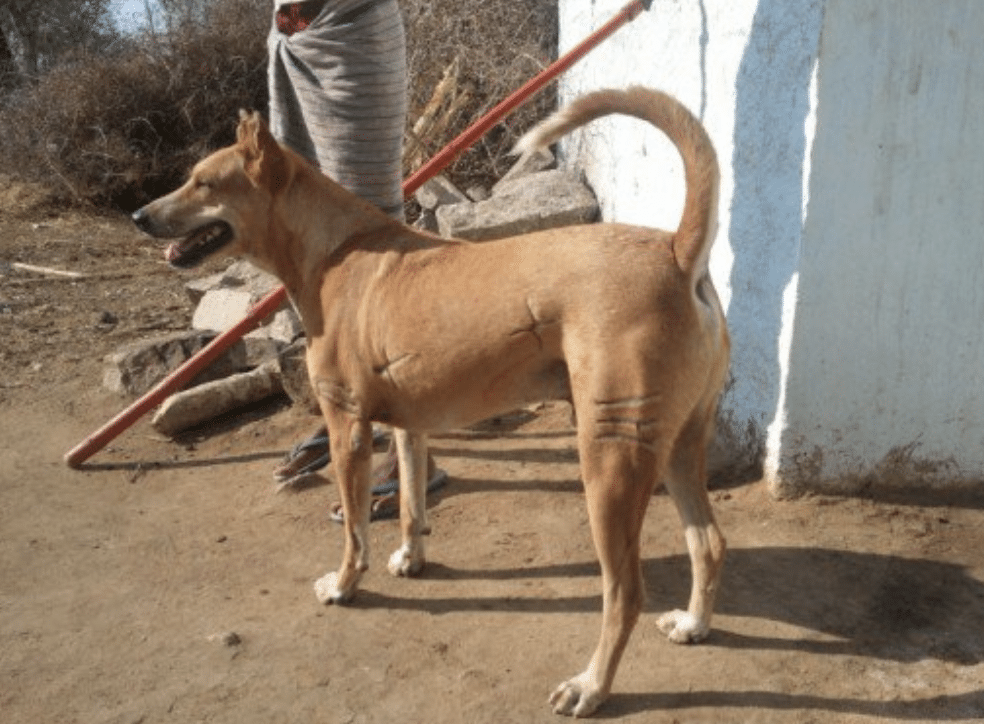 In Pandikona, the locals are reluctant to give away or sell puppies to anyone they are not convinced will take good care of them. Breeding them selectively elsewhere has been difficult. This, and the small area they are found, have made them a rare breed. Some efforts are being made to popularize the breed but they do not have the brightest prospects at the moment. It is believed that they will become extinct soon.

Are there breeding centres

Breeding centers in India? To be honest, I'm not too sure.