Jonangi: The Complete Guide to the Indian Duck Herding Dogs

A native of the East Coast of India, this “yodelling” herder is an increasingly rare sight where they used to be a common sight. Other names for this breed include Jagilam or Kolleti Jagilam.  They were originally bred as hunting and herding dogs.

Although the breed is not recognized by the major kennel clubs and is not regarded as a “pure” breed (yet), local dog shows at beach festivals feature the breed frequently.

A native of Andhra Pradesh and Karnataka, they are thought to have originated around the Kolleru and Pulicat Lakes. According to the locals, they were originally bred by duck herders. They would migrate with the birds, herding and keeping them safe from predators. Elsewhere, they were used variously as hunting or herding dogs.

However, as duck herding has died out and locals turn to more profitable business, the use and popularity of the Jonangi has waned. Now they are believed to be near to extinction, like many other Indian dog breeds.

Friendliness: These dogs are extremely friendly and get along with most people. Jonangi dogs are wary around strangers, but they do well with small children and other pets.

Trainability: Although they’re not the smartest dog breed, their love and devotion for their owners and/or master makes them relatively easy to train.

Grooming: The Jonangi does not require much grooming, as they were bred to have short coats to the withstand gruesome heat of India. They will, of course, still need basic grooming necessary for all dog breeds.

Adaptability: These dogs have a ton of energy and sticking them in an apartment will not be great for them. They’ll need a big yard to dig holes and run around. The Jonangi were bred for extreme heat, so they don’t generally do well in the cold.

Activity: They need plenty of exercise to expend their energy. Usually, a Jonangi will spend a good part of the day digging holes if they’re not properly walked. If you don’t want a bunch of holes in your yard, you better let them run. 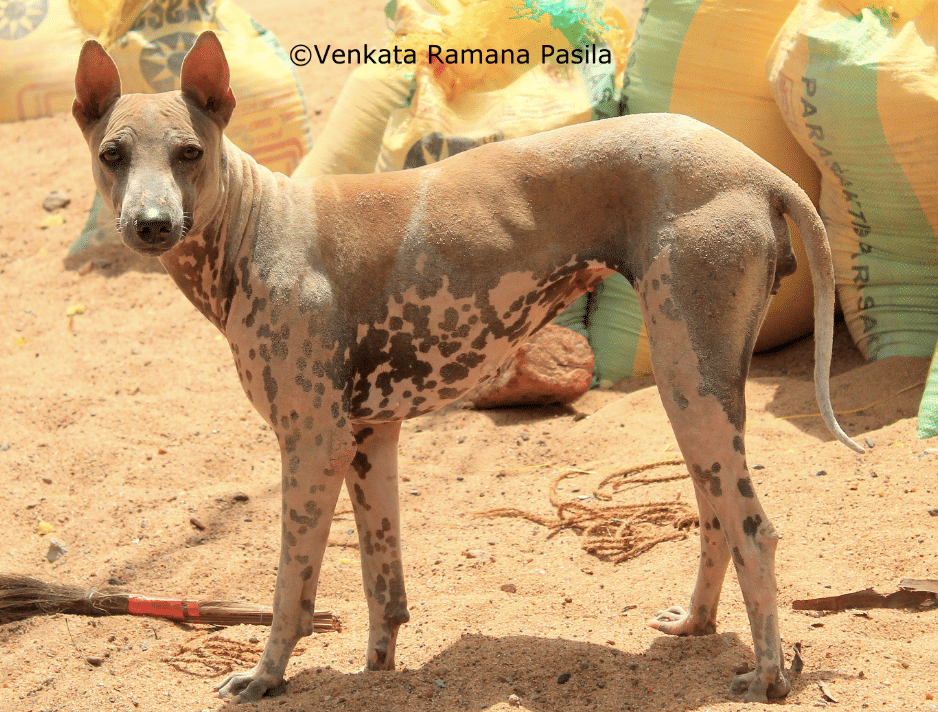 Due to the interbreeding with other dogs, there is a lot of variation in the Jonangi breed. Colors can range from fawn to black and white with biscuit and chocolate in between. Sometimes piebald or patchy, they can vary drastically even within the same litter.

Looking a little like a sleeker English Bull Terrier with pricked ears, the Jonangi can be as muscular as any Bull Terrier. Their short coat is well adapted to the extreme heat of their native environment and can be very glossy.

Usually, Jonangis have a medium length whip of a tail that can curl at the end. Their ears are usually pricked and look quite a lot like a desert fox or dingo (they are tulip ears). In other words, their ears are highly articulate.

With a squat face and a short muzzle, they can be mistaken for a fox at first glance. One of their most distinctive features is their wrinkled forehead, which is thought to be very endearing. They can stand up to 21 inches tall and do not weigh very much. Data regarding this dog breed is extremely hard to find. 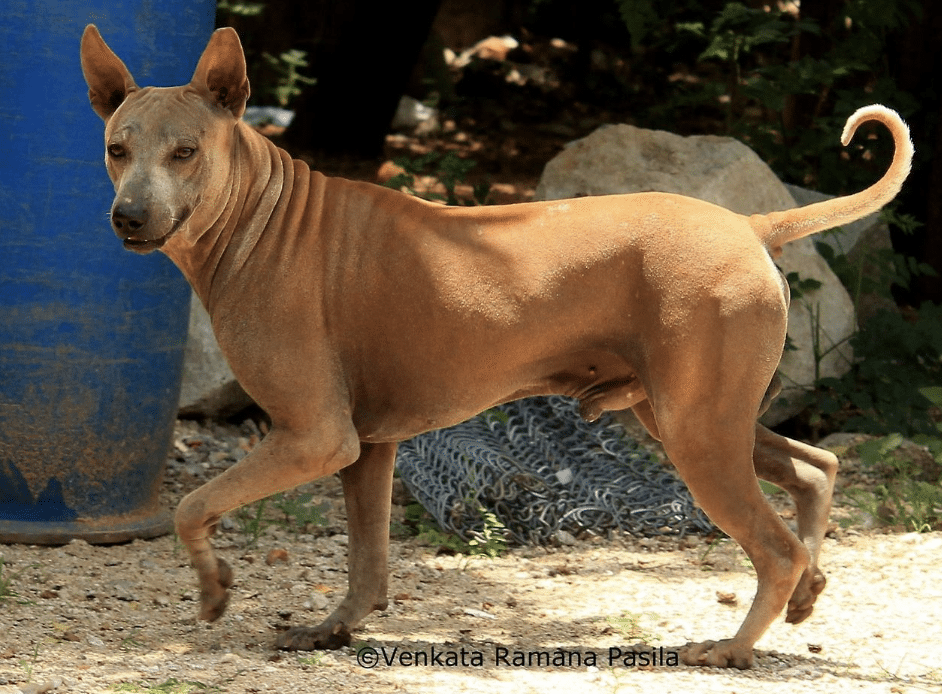 They’re not the most intelligent of breeds and some even claim they’re a dumb dog breed. Nonetheless, Jonangi dogs are easy to get along with and make very good company. They’re suited for both a one-person relationship or a family setting. In addition, they are protective and very affectionate with people they know. As guard dogs, they can be wary of new people but are very unlikely to show aggression unless provoked.

The ease of training a Jonangi is one of the main selling points of the breed: they are very biddable and easy to please. Good with children and other dogs, they make a good energetic pet for a family or individual with a lot of energy.

Agility is one of the hallmarks of this breed, they can dodge and weave in dense undergrowth and over difficult terrain with impressive ease. Because they generally had to fend for themselves, they can travel a very long distance with their long strides. This energy can be too much for apartments unless you are able to give them the exercise they need every day. A medium to large yard is ideal. Make sure you fence it off, as they might wander off.

One of the most fascinating features of the Jonangi breed is their reluctance to bark: they will yodel instead. This is often hard to comprehend for most dog owners. You just have to hear it for yourself to believe it. Fortunately, there are YouTube videos of these dogs yodeling. So, have a look on YouTube when you are done with this article. It can seem like they are ill or in pain, but it is perfectly normal and quite comical. 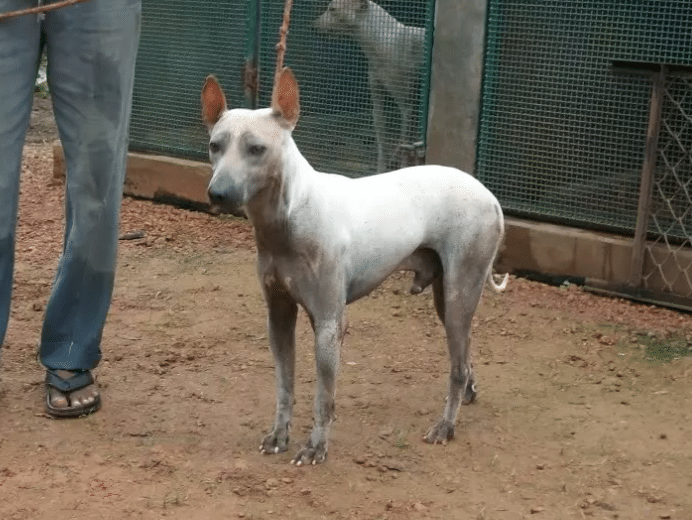 Life with a Jonangi should be straightforward: they have good health, are relatively smart, and make excellent companions. Their affectionate and fun natures appeal to children, who get along well with them. As guard dogs, they are generally effective.

Their life with the ducks has also left them with one habit that might turn a potential owner off: their love of digging big holes. Presumably to keep them safe at night, they like to tunnel down and get in. Some Jonangi owners will tell you that they actually prefer holes to their bed in the house. It is not clear whether they can have this trained out of them, but it is possible.

Information on their health is hard to find but they appear to be a robust breed with few inherited diseases. Breeders rate them highly and do not report many problems health-wise. Through many years, they have been cross-bred with other breeds. Thus, it’s safe to assume they’ve developed a tolerance to certain canine health risks.

The Future of the Jonangi

Some dedicated breeders in Kolleru are trying to revive the breed, which is close to extinction. Their good nature and suitability as family pets should be enough to expand the popularity of the breed, but it does not look good at the moment. Apparently, they are finding new uses as guard dogs, which could potentially save the breed from extinction. They are good pets, so that could help too.