An enormous mastiff-type breed originating from northern India, the Gaddi Kutta dog is sometimes referred to as the Indian Leopard hound or the Himalayan Sheepdog.

Some people mistake them for the Tibetan Mastiff (most expensive dog) but the Gaddi Kutta is less bulky and has a mane like a big black lion. To the detailed observer, they stand out and are actually very different.

A Gaddi Kutta is not for the faint hearted. They are huge, aggressive, and incredibly strong. However, they are very intelligent dogs and can herd goats and sheep with little or no instruction.

The Gaddi Kutta started out as a hunter but found use as shepherd dogs because they are tough enough to take down a snow leopard, hence the nickname Indian Panther Hound.

They get their name from the local term of “Gaddi,” which means shepherd. Kutta just means dog in Urdu. Some people call them the Mahidant Mastiff.

Friendliness: For how big these dogs are, they are considered to be fairly friendly. To ensure they are great around humans and other dogs, early socialization training is a must. But if you take the time to do so, these dogs will be great around those they are familiar with.

Trainability: Not only is the Gaddi Kutta an intelligent breed, but they are relatively easy to train. It may be hard to get them to regular perform dog tricks for you, but obedience and socialization training shouldn’t be a problem. As loyal as they are, the Gaddi is willing to learn for their master(s).

Grooming: The Gaddi originated from the Himalayan region, which requires a heavy long coat to stay warm. Because of this, they have a long thick fur coat that often sheds. Grooming will need to consist of regular brushing and dealing with the shedding, in addition to basic grooming.

Adaptability: These dogs need a lot of room to move around, especially because they are such large dogs with lots of energy. They’re not suited for the apartment life nor are they compatible for warm weather. Counting on your Gaddi to adapt to these major factors will be extremely tough.

Activity: The Gaddi dog requires a ton of exercise on a daily basis. Take them out for walks, but also give them sufficient room to freely run around and expend energy on their own. It would be terrible to keep these large mastiff dogs in an enclosed space for long periods of time. 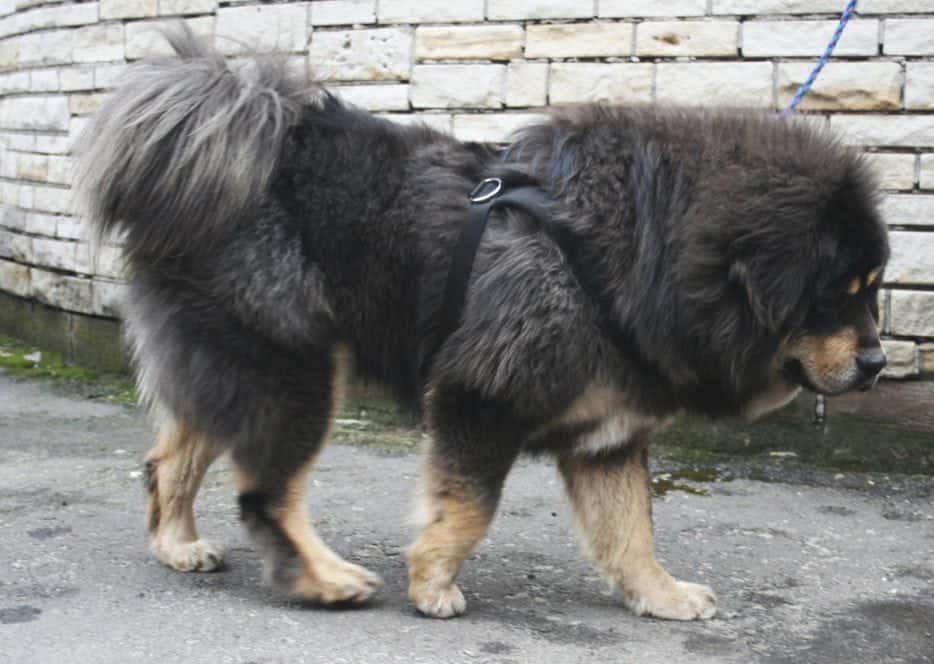 The Gaddi Kutta is a breed that leaves an impression. Standing at around 34 inches tall and weighing in at nearly 13 stone, they are imposing. Their coloring is generally consistent, with a dark brown or black overcoat and lighter tan or brown patches on their face and underside.

Like many Indian dogs and mastiffs, their tail curls back over the body and is very fluffy. This is one of the features that confuses people with a Tibetan Mastiff. In addition, the Gaddi dog has a solid mane and a thick undercoat.

Their eyes are amber colored. And with long legs and a slighter frame than a Tibetan Mastiff, they are a more elegant and composed dog compared to their larger cousin.

The skull of a Gaddi Kutta is thick and pointed, making them hard to grip in the jaws. Likewise, their necks are thick and hard to bite, giving them an advantage over the slighter predators they fight on the mountainsides.

Origins of the Gaddi Dog 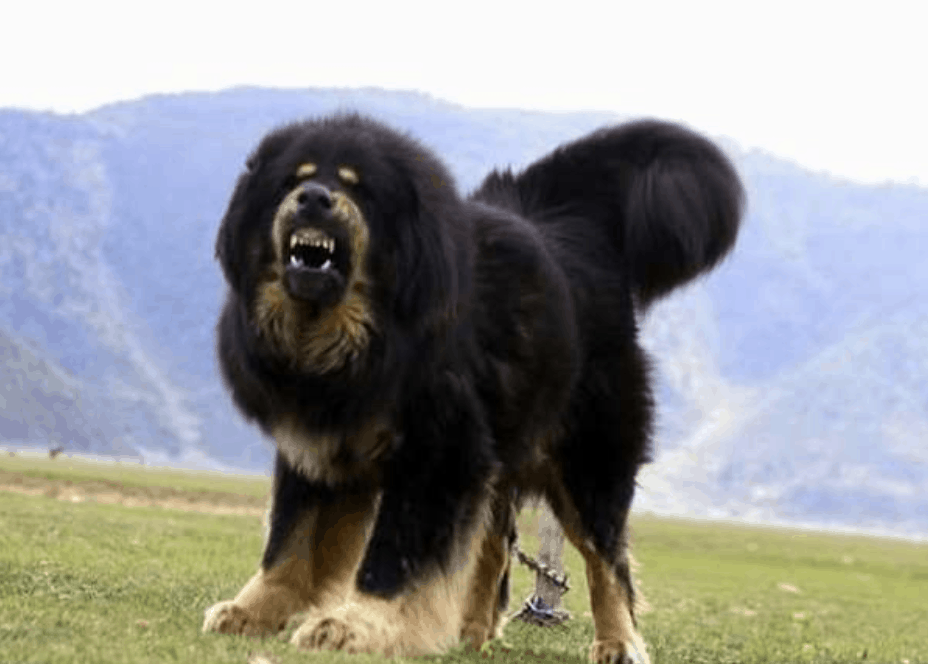 Exactly where this breed came from is not clear. They are certainly mastiffs but their lineage has been lost to history. Local legend has it that they are a cross of the wild dogs of the Himalayas and Tibetan Mastiffs.

And by looking at the two of them, this is easy to believe. Others say that it was a tiger crossed with a dog. Biology refutes this but then again, it is easy to see why people would think that.

The Gaddi Kutta is not a “pure” breed, according to the kennel clubs of India. The dingoes of Australia share a genetic inheritance with the Gaddi dog. 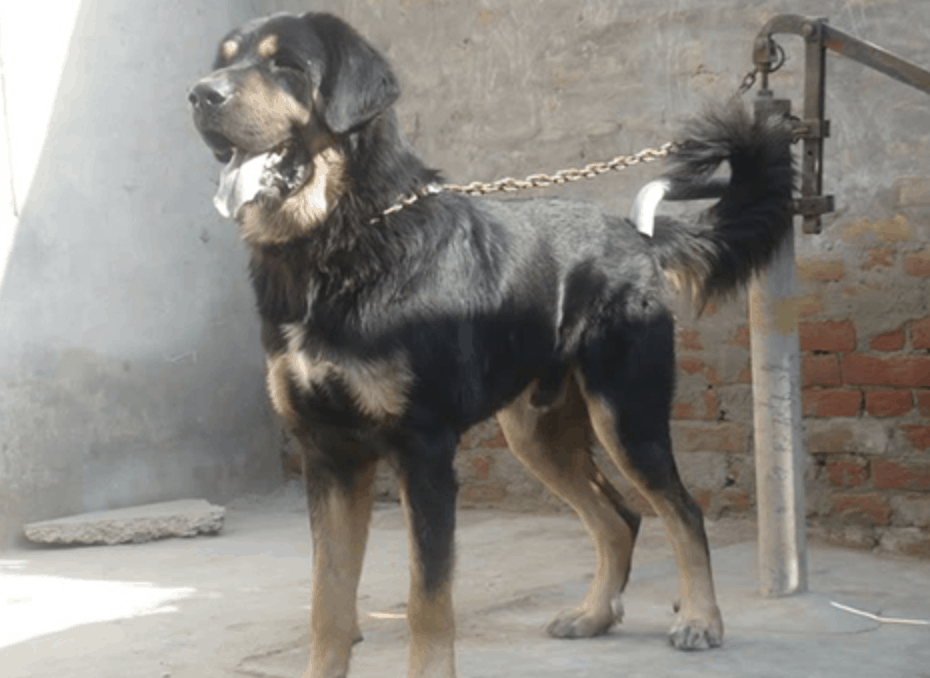 Highly intelligent and capable, they found good use as sheep herders and protectors in the mountainous and treacherous conditions of the Himalayas. They move with the grace of a prized fighter.

Compared to a Tibetan Mastiff, they are more energetic and vivacious. With such a big frame, they need a lot of exercise and suffer a lot without it. They are easily bored by repetitive games but are very willing to play. In other words, “catch” may not be the best game to play with your Gaddi.

With Children and Other Dogs

Generally tolerant of children, they do not respond well to infants who do not know how to respect their need for space. They do not like being surprised either. However, they are very good family pets if you can get one young and intensely socialize it.

The herding instinct goes deep, so be prepared to be herded if you go for a walk in a group. They are very protective of young children, who they will do a good job of keeping from dangerous situations. Generally unflappable, they are reliable dogs.

Training a Gaddi Kutta is relatively straightforward. They are smart enough to know what you want but can be stubborn. When trained and socialized, they are unlikely to attack other dogs or humans unless threatened.

As guard dogs, they are work hard. There are not many better deterrents than 13 stones of Gaddi Kutta bearing down on you, so people opt to use them as watch and guard dogs.

The Gaddi dog was bred to fight leopards and is not one to back down from a fight. They are fearless and incredibly brave, willing to confront danger head on. The fact that they can protect a household and village against these predators make them extremely appealing to humans.

Loyal and very protective, they will let you know if anyone is approaching or acting aggressive. When they know you, they will be very affectionate. It can take a while to get to this stage, but it is worth it.

Living with a Gaddi Kutta 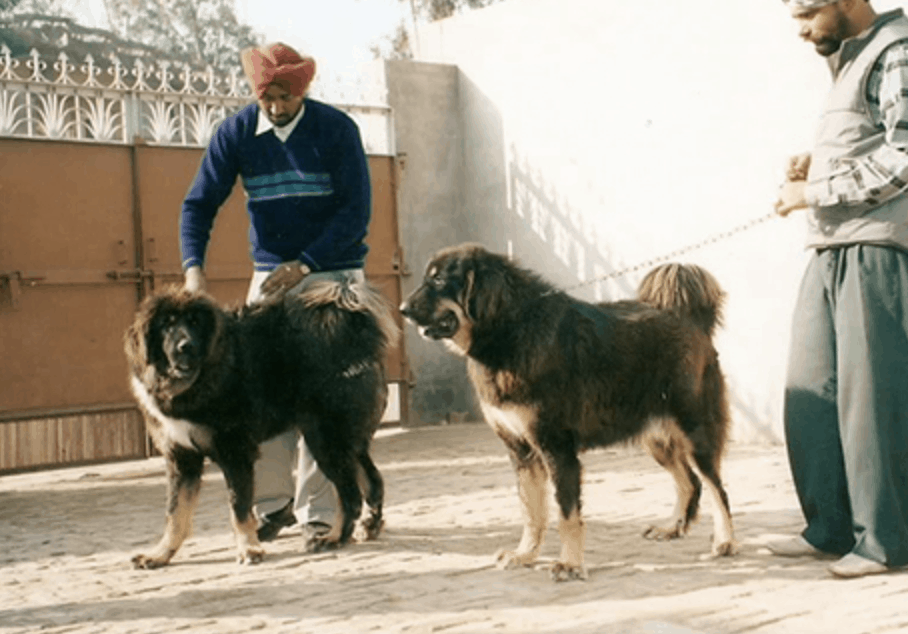 The first concern of living with a Gaddi Kutta is all that fur. They have a double coat which will shed in autumn and spring, leaving long dark hairs all over the place. Your Gaddi Kutta will need regular grooming to keep their fur in good condition, although they are generally tidy animals.

Gaddi Kuttas need a lot of space, so apartment living is not appropriate. They need a big yard to play in and daily exercise. If you consider the fact that 4 Gaddi dogs can take care of 2000 sheep on a windswept mountainside, you get an idea of how independent and self-reliant the breed is. With this in mind, you need to stimulate them and keep them well exercised.

Gaddi Kuttas are generally obedient and relatively easy to train, so they can make very good companions.

Apparently, they are a robust and healthy breed. Weak dogs cannot survive in the Himalayas, so only those resistant to parasites and infections survived. This has led to a dog that has no trace of poor genetic inheritance and a robust immune system.

The Future of the Gaddi Kuttas

It is hard to tell how many Gaddi Kuttas are left. It is believed that they are endangered, even though they are a relatively popular breed of dog. They are not suited to modern Indian city life, which could limit their popularity in the future. However, substantial numbers still see good use herding sheep and goats, just as they have always done.

which city you are living in ?. Im in Indore, mp. looking to get a gaddi kutta. will he able to adapt M.P climate

Hai, will the dog survive comfortably in the climate of kerala without any air conditioning. If I buy the puppy from hariyana or punjab insted of himachal, will the dog be more adapatable to kerala?

Were do you live?

Will it survive in Assam. It has typically a mild season here.

I'm sure the dog will survive, but he may not be comfortable.