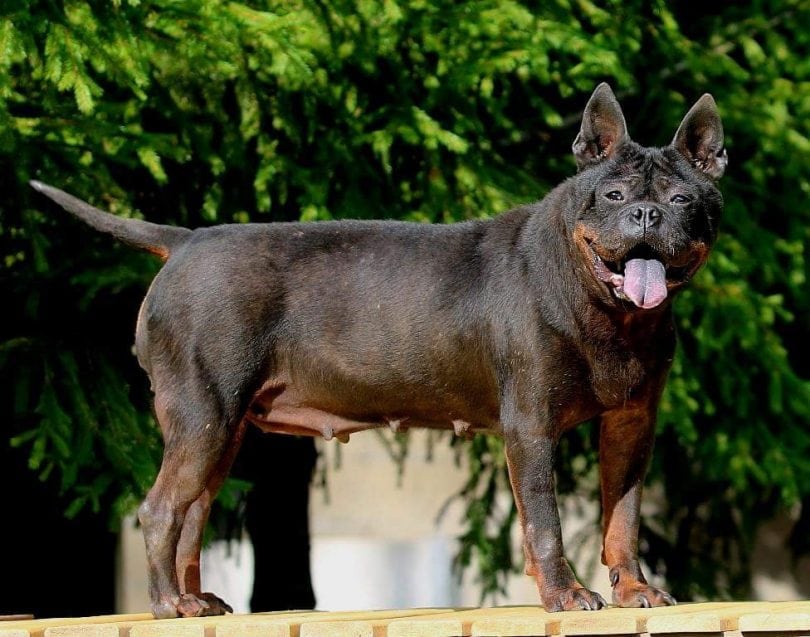 You may be wondering, how do you pronounce Chongqing? The proper pronunciation for this dog breed is “Chun-Ching.” You can now properly name the breed, assuming you can even find one. Due to multiple mass culling of dogs, the Chongqing’s population was decimated dramatically in recent years. There is currently estimated to be only 2000 Chongqing dogs in existence. For this reason, they’re as rare as the Chinese Giant Panda, if not more.

You can easily identify a Chongqing due to several distinctive characteristics. Folds of skin on the forehead give off the impression that the Chongqing is perpetually frowning. Combine this with a short black muzzle and unusually pointed ears and you have a canine that appears deeply contemplative. As muscular as they are, the short and sparse fur exposes the underlying skin in the form of black patches all over the body.

An external appearance, as with the Chongqing dog, certainly warrants caution. One look and you will have realized that this dog is not meant to serve as arm candy. They are an aggressive dog breed that thrive when assigned to guard the property or protect the family. Do not attempt to keep a Chongqing as a pet if you are a first-time pet owner. They respect authority and resent the lack of it. Because of this, they’re more suited for someone who is experienced at handling dogs and takes charge of them.

Friendliness: With enough socialization with people and dogs, a Chongqing can be as friendly as any other dog. However, they do have a primal hunting instinct, which can make them unpredictable at times. Still, it’s not recommended for them to be around children until the children are old enough.

Trainability: These dogs are smart and can pick up commands fairly easily. Because of their intense devotion, they’ll happily do your bidding as long as your firm and consistent with your obedience training. Still, they’re best suited for experienced trainers and as long as you handle them well, you’ll be fine.

Grooming: Chongqing dogs have a short coat which makes for easy grooming. They don’t shed, so you won’t have to deal with intense seasonal cleaning with these dogs. Toothbrushing, combing and nail clipping are still necessary like with all dogs. The occasional bath will be required if they get into a messy situation.

Adaptability: This dog breed is not suited for extreme heat or cold. However, they’re highly adaptable when it comes to living environment. They do great in a large open area, but can also be content in an urban apartment. As long as you take them out for their daily exercise, they’ll be just fine.

Activity: Like with most dog breeds, they need a basic level of physical activity. A simple 30 minute walk every day will suffice. Some Chongqing dogs that are more active by nature may demand more activity. However, there are many cases where a Chongqing may be more laid back. Whatever the case, you must ensure they exercise.

Some interesting facts that you must know about the Chongqing are –

Origins of the Chongqing Dog 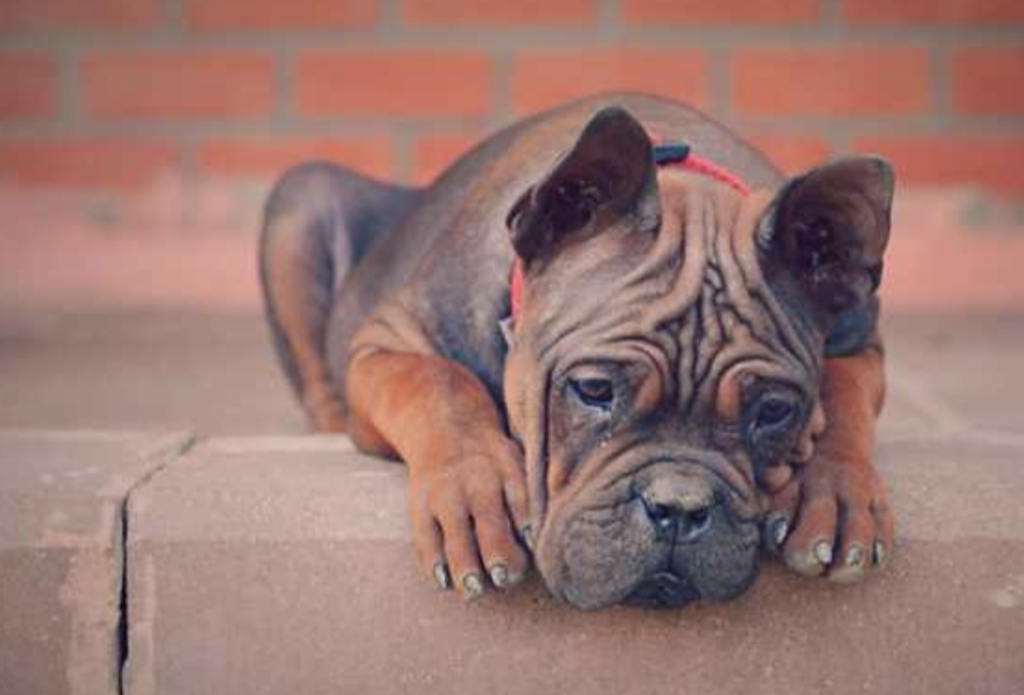 Despite many dog breeds to have originated from China, there hasn’t been any mention of them in Chinese literature. Instead, they have found representation in mostly artwork. The Chongqing dog is no exception. Curiosity for this dog breed gained momentum in China during the 1980s, when ancient statues from China’s Han Dynasty were discovered. These artifacts proved that the Chongqing existed over 2000 years ago during the ancient dynasty.

Much of the information pertaining to the ancestry of this dog breed is based on guesswork. Whether the Chongqing originated from China or from other Asian countries (before being brought into China) is unclear. What is evident, however, is the fact that this dog breed inhabited the mountainous regions where they co-existed with the human population. They served a number of tasks, ranging from helping with hunting to guarding the farm against predators.

The Chongqing dog was on the brink of extinction twice in the last hundred years. The reason for near-extinction the first time around was the Communist party. After having gained power, the Communist party expressed the perception of dogs as luxury pets. They embarked on a butchering spree that wiped out almost every indigenous Chinese dog breed – including the Chongqing dog.

The population of this dog breed was well on its way to recovering from the aftermath of the massacre during the last two decades of the 20th century. However, in 2003, the SARS epidemic hit China. Once again, all dog breeds including the Chongqing were culled. This practice hit so hard that there were hardly any Chongqing dogs to be found in the following years.

Since then, the Chongqing has somewhat recovered from the massive blow. Today,  only the few Chongqings that remain serve as either companions or guard dogs. 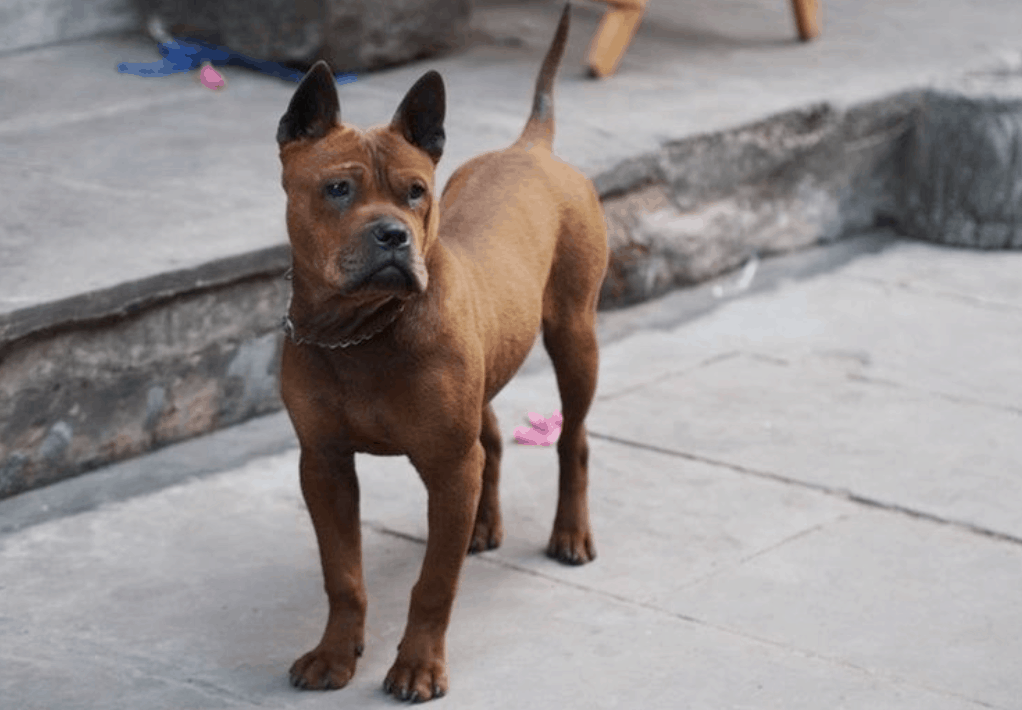 The Chongqing dog is loyal, fearless and bold. That being said, members of this dog breed have been known to exhibit contradictory traits. For example, a Chongqing that serves primarily as a guard dog will behave very differently from one that is a companion. Some Chongqing dogs might prefer open space to run around. On the other hand, many are perfectly comfortable and happy within the confines of an apartment.

When you bring home a Chongqing, expect them to show immediate affection towards all members of the family. But as days and weeks roll by, this canine will begin to take a liking towards one particular member. In other words, yes, they do tend to pick favorites. But once they pledge loyalty, all their efforts go toward ensuring the safety of the whole family.

As a Chongqing owner, you should communicate with your dog as much as possible. Sure, your Chongqing may not be able to verbally reply, but this practice helps gain trust. Unlike most dogs, a Chongqing dog rarely barks. However, when they do, it is done with the intention of drawing attention to an unknown person or threat.

Be firm with your dog without being heavy-handed. In addition, it’s best to always remain calm and consistent at all times, especially with rules. As independent as they are, Chongqing dogs will quickly begin to respect you if handled well.

All Chongqing dogs comes with a strong inherent predatory drive. All they need is a hint of a movement and they will instinctively jump out. Whether a fish or a bird and even a cricket, nothing ever escapes a Chongqing’s grasp.

When socialized early on with other dogs, they do develop a fondness. However, this remains limited to dogs they’re familiar with and does not extend to stranger canines and felines. Most members of this dog breed never develop a tolerant attitude towards cats, strangers, dogs or other human. If socialized from an early age with consistent sessions, a Chongqing is polite in front of family friends, but prefers to remain aloof.

Children in the family will find a Chongqing affectionate most of the time. This dog breed will always remain wary of unfamiliar children and adults given it’s suspicious personality – it’s what makes them great guard dogs. Usually, they avoid rough play and should not be forced into children’s’ activities in case they turn aggressive. Given a choice, a Chongqing feels at home in a quiet atmosphere rather than a noisy/rowdy one. 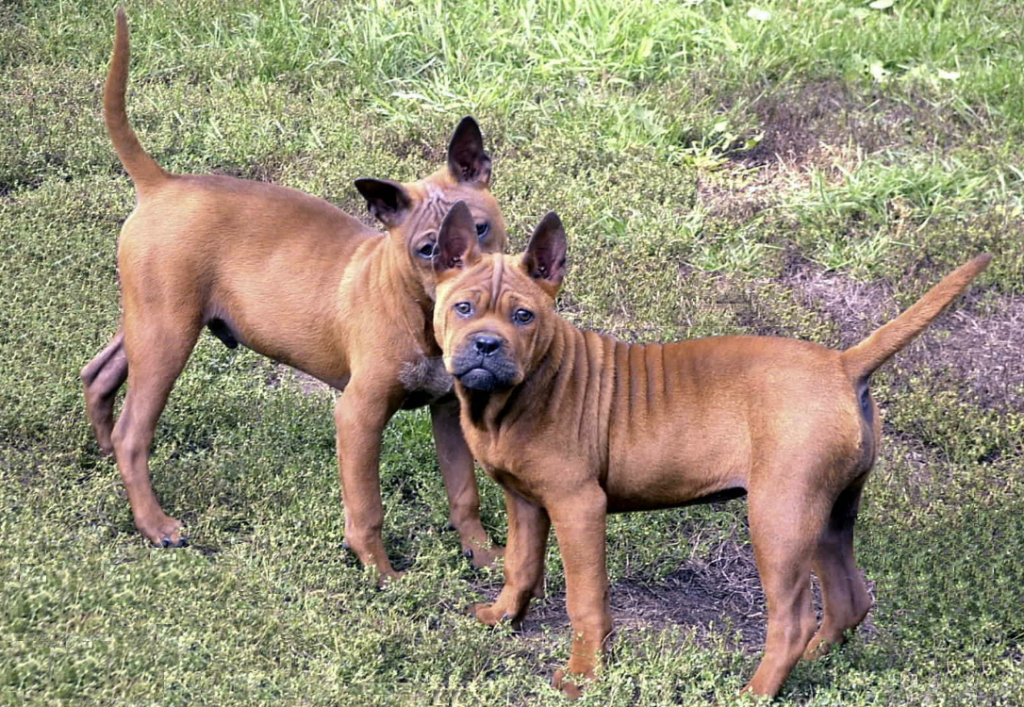 Chongqing dogs need to be exercised daily – like with most dog breeds. It doesn’t have to be intense and can range from a 30-minute walk to something more strenuous. For example, long walks, a jog or a hike are all great for these dogs.

While Chongqings tend to be satisfied with moderate exercise, they are equally comfortable with high-intensity workouts. Given their stamina, members of this dog breed need a daily quota of exercise. Failure to do so can quickly turn them into destructive dogs. An under-exercised Chongqing can turn your house upside down in no time. So, set aside some time every day to take your dog out to expend all the pent-up energy.

Grooming a Chongqing is easy and requires minimal work. However, this doesn’t mean you don’t need to do anything. All you need to do is ensure that their sparse coats remain brushed at all times. Likewise, the innumerable wrinkles should be cleaned regularly and checked for any oncoming skin problem. With a Chongqing, bathing is not exactly a priority and should be limited to as and when the need arises.

Make sure they have their teeth brushed regularly, especially if you’re feeding them fruits and vegetables as treats. Nail clipping is also essential to keeping a healthy and happy Chongqing dog.

Avoid serving your Chongqing commercial dog food. Because they’re considered to be an ancient dog breed, they have certain drawbacks – such as a sensitive stomach. Unlike many other dog breeds, a Chongqing thrives on human-grade foods and dog food of exceptionally high quality.

Make sure that the food served to your Chongqing is 20% fat and 30% protein. If you intend to allow high-intensity exercise then serve high-quality dry food multiple times a day.

Many of the health issues that a Chongqing faces are attributed to its sparse coat. As an owner you need to be aware of these problems –

Bone and joint problems are fairly uncommon but can occur depending on your dog and their physical activities. Subjecting your Chongqing to regular health check-ups would ensure early detection and a painless recovery.

If taken well care of, a Chongqing can live to be a 19 years old, which is the maximum age limit for just about any dog breed.

The Chongqing dog has since been compared to many different dog breeds, none of which, are Chinese dogs. They’re most similar to the Australian Dingo, Singing Dog (found in Papua New Guinea) and the American Carolina Dog. If you’re interested in this dog, you may want to consider the other options. Because the Chongqing is so rare, they’re also a very expensive dog breed.