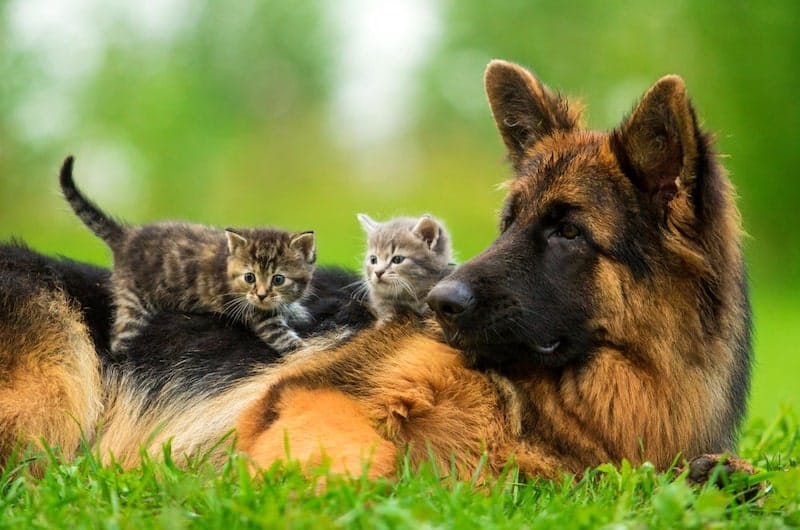 German shepherds make incredible pets! But if you have other pets, such as cats, you may wonder if they can coexist. After all, the German shepherd is a large and muscular dog that can potentially do a lot of harm to smaller animals.

Whether you have a German shepherd or plan to get one soon, there are things to consider. Read on to learn how to ensure your cat and canine get along without trouble.

To say a German shepherd dislikes any animal naturally would be an error. Though they may look a little scary, GSDs can be as friendly as any dog breed. But even so, the German shepherd does have strong prey instincts.

Also called a prey drive, this refers to how many dogs may naturally want to chase or hunt smaller animals. Before they were domesticated, this drive was what allowed our pets’ ancestors to survive. And no – this instinct didn’t disappear with domestication.

Now, it might be seen as an inconvenience for anyone who wants a dog (besides hunters!). This drive can encourage your German shepherd to see smaller animals as things to be chased. Which could be bad news for your cats.

However, this only serves to highlight the importance of socializing your dog. Depending on how you socialize your German shepherd, it very well could come to see cats as friends rather than potential food or prey.

To truly understand the dynamic of the German Shepherd and a cat, we first need to understand the two types of personalities. Both animals are obviously different species and will have different habits, tendencies and approach to others.

We need to keep three key aspects of a German shepherd’s temperament in mind:

The Personality of Cats

It takes two to tango, or to get along. Your German shepherd can be as loving as possible, but what if the other party isn’t friendly? The good news is that cats tend to be less intimidating than the GSD, at least from a pet’s perspective.

A lot of cats tend to be quite aloof, while others can be surprisingly affectionate. Either way, they shouldn’t cause too many problems on their side.

However, if you have an impatient cat or one that does not like affection, it might not get along with a dog. After all, dogs tend to be quite physical with their affection. So a cat might end up losing patience over being licked or bothered.

In a study, researchers found the five main personality traits of cats, dubbed the Feline Five. The five include neuroticism, extraversion, dominance, impulsiveness, and agreeableness.

More Similar Than You Think

And according to the five feline traits, German shepherds are more similar than you may think. In fact, I would argue that these dogs have all five traits too.

Let’s take neuroticism for example. Plenty of owners believe that German shepherds are neurotic and sensitive dogs. It’s a trait that these dogs could develop over time. As a result, they can grow neurotic over small sounds, digging, or scratching.

German shepherds can also be very extraverted dogs, depending on your dog. And if properly trained or socialized, they have a better shot at being extraverts. Dogs are all innately friendly animals and the GSD is no exception.

Given the sheer size and power of these dogs, is it really a surprise that German shepherds possess a dominant personality too? It’s not always the case, but they’re more prone to dominant behaviors than other breeds.

With herding and guarding instincts in tact, German shepherds may also be impulsiveness at times. That is, they may start herding or go into “protection mode” based purely on impulse, which comes from their instincts.

And because German shepherds are some of the smartest dogs, they tend to do well with obedience and training. This makes them very agreeable dogs if properly trained. Their loyalty goes deep and the dog will take every opportunity to please their owners.

German Shepherds and Cats Can Get Along

If a German shepherd meets a stranger cat, who knows what will happen. Unless your dog has been specifically socialized with cats, they make act aggressively.

However, German shepherds that are raised in a home with cats tend to get along just fine with them due to their unwavering loyalty and devotion to the pack. In fact, Rover calls them one of the top five most loyal dog breeds!

German shepherds also have a natural protective instinct, which makes them much more likely to keep the cat safe than to do harm to it. But of course, the dog must be very familiar with the cat and see the animal as a pack member.

Because of these two signature traits that define the German shepherd, it can be easy to make the two get along. Or at the very least, cohabit in a civil manner.

Of course, there are plenty of variables, including the personality of your cat. And a lot of it depends on how well and often you socialize your dog with the cat.

How to Get Your German Shepherd to Like Cats

Sometimes, a dog will develop a naturally gentle personality. However, often it is up to their owners to shape their temperament and behavior.

But any breed can learn to get along with cats, and German shepherds are no exception. However, there are a few steps to take to get your German shepherd to like cats.

One of the best ways to ensure your German shepherd gets along with cats is to socialize them from when they are puppies.

A German shepherd that is around cats from a young age will see them differently from an adult that has never been socialized. Without this, it’s very likely that the dog will see a cat as a prey rather than a friend or family member.

According to the American Kennel Club, socialization should start as young as 3 weeks of age. That early window of development is going to be crucial to seeing good results.

SOCIALIZATION TIP: Even if you do not have cats, socializing any dog early on is a vital step in their development. Socialized dogs enjoy a much calmer and happier life than those that miss out on it.

What If My German Shepherd Was Not Socialized Early On?

Don’t worry, there is still plenty of hope. Just because a dog was not socialized early on does not mean it can’t learn. In fact, with how intelligent German shepherds are, they can quickly learn how to get along with cats.

Below are a few tips to help you along your way.

Generally, introducing a puppy German shepherd to a cat will go more smoothly than doing so with an adult GSD. During this period, both animals are more adventurous and willing to explore.

But again, this mostly depends on socialization. An adult or adolescent German shepherd that has been socialized early on can pull from prior experience. It likely already feels comfortable and safe around others, so will be less likely to show aggression.

Still, we should cover a few tips that will be important regardless of what age you introduce your German shepherd to cats.

Introducing Your German Shepherd to Cats

We have put together some key tips for ensuring your German shepherd and cat have a safe and productive introduction.

We believe these are important, regardless of whether your German shepherd is a puppy or adult, or has been socialized or not.

Supervision Is a Must

You will want to have as much control over the situation as possible. Though the chance for aggression may be low, it is always better to play it safe.

So we recommend being present from start to finish. We even would suggest continuing to be present for all future interactions, until you are absolutely sure your German shepherd and cat get along.

You can take steps such as:

Suddenly forcing your German shepherd and cat to spend hours together likely isn’t a good idea. In some cases, you may scare the two animals from wanting to play with each other – giving you the opposite of what you wanted.

Instead, start with short meetings. Maybe even just a minute at first. Our goal is to get your GSD and your cat acquainted with one another, not to become fast friends from day one (though that would be perfect!).

Remember – patience is key! With that said, below is a quick outline for a natural progression of getting your German shepherd and cat acquainted with one another.

Since both German shepherds and cats use smell a lot, getting them used to each other’s scents is a key first step. After all, both animals rely heavily on their sense of smell.

We recommend that both your German shepherd and cat have recently been bathed. Or at least that they don’t have any scents on them other than their own (and maybe yours).

Multiple scents can make for a confused sensory experience for both pets.

While they are swapping scents, watch for any changes in behavior. Is either party showing signs of aggression? Then call it a day and separate them.

A good next step is to let your German shepherd and cat be aware of each other, but have a barrier between them. This can be a baby gate or whatever you see fit. Just make sure the two can see each other through the barrier.

This can let them grow used to each other without the risk of one chasing down the other. Always be sure to reward any calmer behavior or even signs of gentle curiosity. Make sure to bring out the good treats during this process!

Try doing this for about 5-10 minutes for a week or so, and decide if you can move on to the next step. If there has been no aggression, your pets might be ready.

But not forever. For the first face-to-face meetings, we still want you to have complete control over the situation. Even if the two are finally familiar with one another, anything can happen at any moment.

To be safe, we recommend still having a leash on your German shepherd. That way, if anything escalates, you can maintain control quickly and easily.

Again, try this for about a week for only a few minutes at a time. The goal is still to get them used to calmly being in each other’s presence.

Only once you are sure that there is no aggression or chasing from your German shepherd can you let them spend time together without a leash.

Still, we strongly advise supervising from start to finish. Only once your pets have spent several peaceful months together can you possibly leave them alone together.

Have you had luck getting your GSD and cats to be friends? If so, what steps did you take to foster their friendship? Share your experience in the comments below.