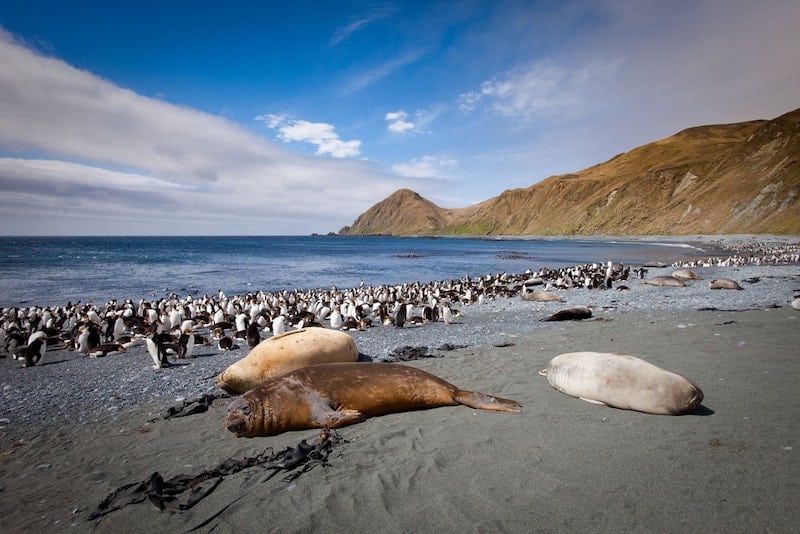 At one point, an island off the coast of New Zealand became overrun with rabbits. And no, this isn’t a plot straight out of a children’s fiction novel. In fact, would you believe that the rabbit population grew to over 150 thousand at one point?

You could literally stand at any spot on the island and see burrows with hundreds of rabbits hopping around everywhere you looked.

While this may seem like heaven for some animal lovers, it’s a terrifying nightmare for the island’s natural habitat. So, Interested in knowing how these dogs saved the island?

Stick around! In today’s article, we’re exploring the fascinating story of how twelve dogs managed to save Macquarie Island from total bunny destruction.

Rabbits are small fluffy animals with their signature short tails, whiskers and long ears. For the most part, the herbivore rabbits are completely harmless animals. They only feed on plants such as grass, seeds, fruits and vegetables.

But much like locust, when you gather tens of thousands of them…they can be…well, quite destructive to the habitat.

The story of how “man’s best friends” saved an island takes place on Macquarie Island – just halfway between the southern coast of New Zealand and Antarctica. Macquarie Island is a unique place.

It’s a long and thin island made up solely of rocks spewed out from the Earth’s mantle. In fact, it’s the only island on earth that’s constructed as such.

And even by today’s standards with modern ships, it takes roughly 3 days to reach the island due to the notoriously turbulent and dangerous waters of the Southern Ocean.

Needless to say, it’s a very isolated place. But because of this very fact, Macquarie Island was kept from being ruined by humans – allowing native wildlife to freely breed with little to no dangers.

No illegal poaching of wildlife occured in this area, such as the slaughtering of fur seals for their skin or the capturing of penguins for their oils.

As a result, Macquarie Island developed into a beautiful island with a thriving population of seals, penguins, petrels, albatross and plenty of other native species.

All this was complemented by prolific plant life that inhabited the island. And in 1997, the island made the World Heritage List due to its incredible natural reserves of wildlife.

However, things started to take a turn when seal hunters first discovered the island in 1810 – long before the island was officially declared a wildlife sanctuary in 1933.

The hunters brought with them cats and rabbits, while also accidentally introducing stowaway rats and mice that escaped from the ship. Obviously, the cats went feral and the rabbits multiplied. No surprise here.

But because of this, native fauna and flora began struggling for survival in the next couple of centuries.

The Rabbit Effect on the Ecosystem

Flash forward to 1979. The estimated rabbit population on the island is now close to 150 thousand! Like an uncontrollable weed, rabbits overpopulated the island in full force.

Now you may be thinking, what’s wrong with so many rabbits? It’s not like they hunt seals, attack birds or even eat insects, right? After all, they’re herbivores that feed only on grass, weeds and other vegetables.

Well, you see…the rabbits’ favorite food on the island was the grass. And believe it or not, the grass was absolutely essential to the well-being of the whole ecosystem.

For example, the grass provided cover for the rocks, which prevents erosion while keeping the hills together and giving seabirds a safe harbor for their burrows.

The grass is also home to all the invertebrates on the island, such as the crucial spiders and the essential beetles, which kept the whole ecosystem in check.

With the depleting supply of the island’s grass, the whole ecosystem that once flourished on Macquarie Island was quickly deteriorating.

However, the scientists had a plan: they introduced the Myxoma Virus. The natural hosts of this particular virus are rabbits, and often results in a severe or fatal disease.

And the truth is that it worked extremely well in the beginning. In fact, over the next decade, the rabbit population had dropped a staggering 90 percent.

But in 1985, when the feral cats were finally eradicated on the island, the rabbits ruled the grasslands once again. The effects of the myxomatosis had waned and the remaining rabbits developed a strong tolerance to the virus, as expected.

And by 2008, the rabbit population rebounded from 15 thousand to 130 thousand once again. The devastating effects of the rabbit overpopulation was taking a massive toll on the diverse wildlife – even worse this time.

Their relentless grazing had caused a few major landslides, one of which, had wiped out an entire colony of native penguins.

And no matter where you walked on the island, there was also a risk of tripping on a burrow, which covered the entire island like a persistent plague. It was back to the drawing board for the scientists, once again.

Only this time, they decided to commission our furry companions for help!

However, this mission was more complicated than you think.

Under no circumstances could these dogs touch the rabbits, come into contact with other native wildlife or damage the plant life. In other words, the dogs needed to do absolutely no harm to the island’s ecosystem.

There was only one person capable of pulling this off – Steve Austin. Steve was a renowned dog trainer who traveled the world with his seven Springer Spaniels to help with this very problem.

But with just two years to train these dogs for a very specific task with a handful of limitations, it wasn’t going to be easy.

On his first trip to Macquarie Island, Steve brought with him his most trusted spaniel named Gus.

He recounts his first day on the island. Gus had run up ahead. One minute he was there, and then he wasn’t. Steve frantically called out to him in search.

But when he turned around, he was shocked to see Gus stuck in a seal wallow – which is essentially a pack of elephant seals lying in a disgusting mixture of feces and mud.

Gus lost all energy desperately fighting to keep himself from going under. It was clear that he was losing the battle, as he didn’t even possess the will to bark anymore.

With all his might, Steve jumped in and pulled him out by the collar just seconds before Gus went under for good.

At this point, Steve knew he needed more help. The island was unlike anything he had ever experienced before. So, he requested to have five more dogs brought in from New Zealand. Labradors this time.

With his seven springers, the whole squad consisted of just 12 detection dogs.

But even with the new reinforcement, it was essentially twelve dogs versus 130 thousand rabbits, which seemed nearly impossible. Or at the least, would take an extremely long time.

However the new plan didn’t solely depend on these dogs hunting every single one of them down. Helicopters were assigned to first drop deadly bait onto the island.

Then, the crew would bring in the tracking dogs to help exterminate the rest of the rabbit population.

You see…the 12 dogs came from two different trainers, but they all had to learn the same new cues and commands for this operation.

Because the island was relatively big, it’s impossible to shout out commands and expect all the dogs to clearly hear this. Instead, they decided to use a whistle for commands.

They taught the dogs specific tasks based on how many times you blow or for how long. The dogs also needed to learn tasks based on the frequency of the whistle.

However the biggest challenge was replicating the environment of the island. After all, where can you find penguins, elephant seals or chilling winds?

In the mid 2010s, the bait drops had begun. The problem was that the weather was so bad that the helicopters only managed to cover 10 percent of the island.

Even so, this killed off a ton of birds that accidentally ate the bait directly or the dead rabbit corpses. People had to manually pick off any leftover corpses to prevent further deaths to the birds.

But the good news is that it worked brilliantly, as at least 80% of the rabbit population were now deceased.

However, they weren’t taking any chances. They’ve seen how quickly a small rabbit population can recover. Even a single breeding pair can, in theory, produce 350,000 rabbits in a short few years!

So, the dogs finally went to work.

The 12 dogs’ main mission was to detect and identify fresh rabbit droppings or urine. After doing so, they were trained to signal to a handler, where they would track down the rabbit and humanely put it down.

It took a few years for Steve and his dogs to cover every single square meter of Macquarie Island and ensure there were no more rabbits.

And in 2014, what once seemed like a daunting and impossible task, was finally completed.

Nature had to take its course, but the island was back on track to its once-thriving, incredible and most importantly, rabbit-free breeding zone for wildlife.

So, what do you think about these amazing tracking dogs? Leave a comment below and tell us what you think!